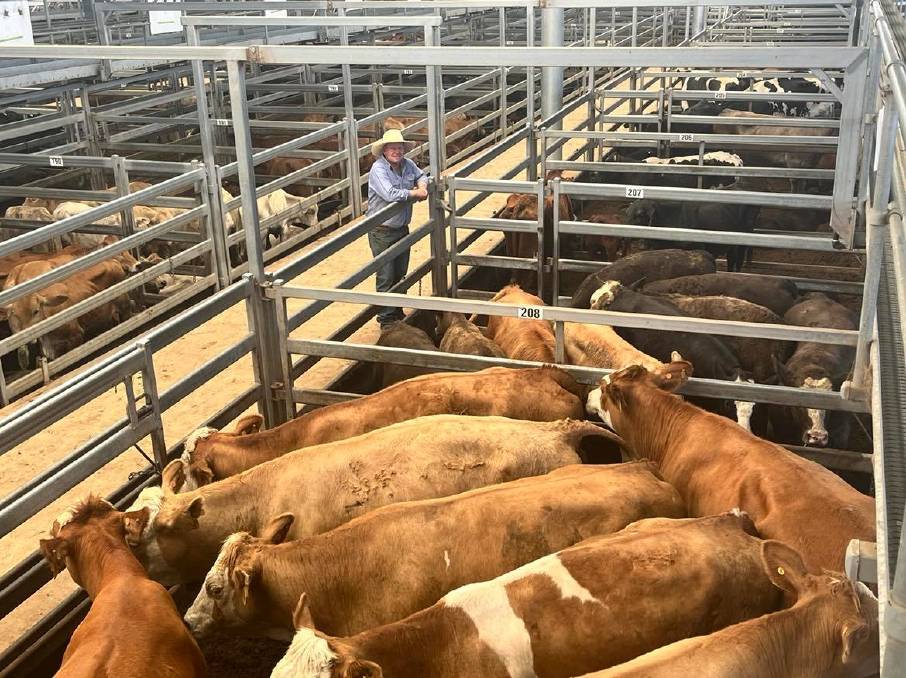 Pitt Son's Walcha agent, Troy Davies, with the market-topping cows with calves, a draft of nine Clay Gully Simmental cows with second calves at foot by a Black Simmental bull. They were sold on account of HD Stearman for $5200 a unit.

For the fifth time this year Tamworth has cracked its record price for cows with calves, trumping the $5075-a-unit benchmark set just two weeks ago.

SALEYARDS records were eclipsed again on Friday, as about 3500 cattle sold to extraordinary interest at the first of the summer store cattle sales at Tamworth Regional Livestock Exchange

Females were the highlight, with Simmental cows with calves breaking a Tamworth record and selling for $5200 a unit and the best yearling heifers returning $3650 a head.

Garvin and Cousens auctioneer Phillip Hetherington said most young heifers sold from $1900 to $2000 a head and most cows returned more than $2000.

Mr Hetherington said the steer market was also "very solid" with prices similar to the previous sale of November 19.

Weaner steers sold to $2300 a head ($2390 in the last sale) with most fetching more than $1800. Topping that market were a draft of 23 six to seven-month-old Angus steers sold on account of CS and DN Brooklyn.

Yearling steers topped at $2390 for Angus ($2400 last sale) with the best of those sold by Glenelg Cotton, Tarriaro.

Other strong sales of steers included Limousin-cross vealers sold by G and H Findlay, Gunnedah, to $2220 and a draft of 15 Angus weaners out of Te Mania-blood Angus cows, sold to $2210 on account of the Maher Family Trust.

In other beef news:

Weaner heifers topped at $2000 ($2240 last sale). The best of those were eight-month-old Angus heifers by Knowla Angus bulls sold by A and W Tisch, Glen Alpine, Werris Creek.

In a sales highlight, yearling heifers sold to $3650 ($2300 last sale) for daughters of the Killain Angus Gilmandyke females which had sold with calves at foot for $5075 two weeks ago, setting a record price for cows with calves at the selling centre.

The draft of seven 15-month-old heifers offered by the Duddy family, Killain Angus, Tamworth, were sired by Millah Murrah Paratrooper and had been artificially inseminated to Killain Rainman P1.

Other strong sales included 11 to 15-month-old unjoined Booragul-blood heifers sold by Green Range to $2170 for Angus and $2110 for Charolais-cross.

A draft of 40 11 to 13-month-old Santa Gertrudis-cross heifers were sold by Strathmore to $2210 while Mawarra sold Glen Avon-blood Angus heifers to $2450.

And still, the dust hadn't settled.

The cows had been purchased from Esk, Qld, with calves by a Lancaster Black Simmental stud bull out of Meningie, SA, and cows back in calf to the bull.

In other sales, Foreglen sold a consignment of 323 Angus and black baldy cows with calves in stage one of its herd dispersal. The offering topped at $4700 a unit.

The sale was conducted by Tamworth Livestock Selling Agents Association.