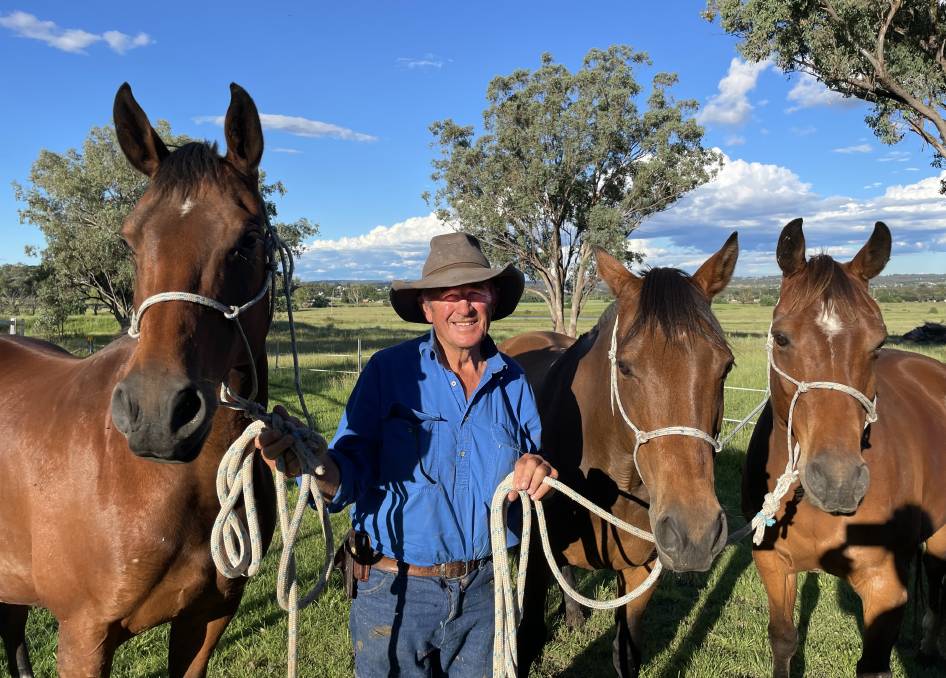 More than a drover, Clarence River-born cattleman Peter Rogan at home near Inverell.

Looking back: Plunging a mob of Hereford cattle down the eastern fall proved no easy job on the road for this experienced drover and horseman.

Late summer of 1977 posed great challenges for those in the cattle game, with prices quite poor since the market crash three years prior.

To make money you had to be efficient, tight with your finances, and not waste a single flamin' penny.

Such a challenge proved passable for the biggest cattle dealer in eastern Australia at that time, Tom Norman, because he was financially efficient by nature. Almost 80 years old he had a life of learnings. The former banker turned to livestock, swapping accounts of others to manage his own, agisting and owning country all over the eastern states that he ran as if they were great batteries of beasts, that could supply progeny on demand to the highest bidder.

Everything was for sale, even the best Hereford cows that the stockman managed to keep aside, hidden in the corner country. Mr Norman found those and sold them quick. When a buyer might ask to pull out a few head from a mob deal Mr Norman would reply with cool assurance: "For every one you take out I'll take one out too." The buyer took the lot!

Mr Norman was tight with himself and kept his own expenses in check.

"Why do you travel second class," asked his stockman, Peter Rogan who received the short answer: "Because there is no third class."

So, it came to be that a consignment of Hereford cattle were delivered by train from Victoria all the way north to the second-last whistle stop before Queensland and from there could only be delivered down a steep and winding eastern fall to Emu Creek near Tabulam by one of two ways: on a Dodge cattle truck, half-a-dozen at a time, or all together as one mob held close by horse and dog. It was always going to be the latter

Mr Rogan was only a young man, already a father of two, and had a lifetime's experience as a horseman with generations of family behind him.

He took with him, as his offsider, a man named Les Hynes who had made the trip before and in spite of a crippled hand could flick the whip with unerring accuracy. 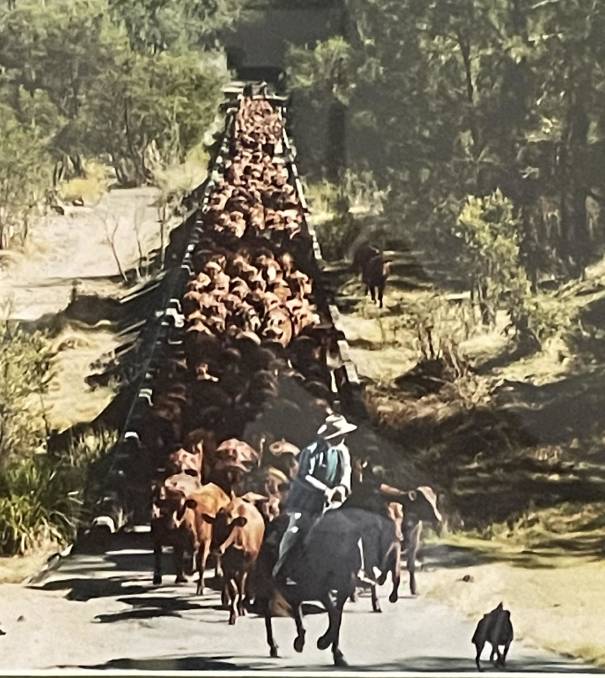 Peter Rogan and his own bred dog leads a mob of Santa Gertrudis at Yulgilbar Station where his family have been involved for generations.

The cattle arrived at Tenterfield on the midnight train and were walked out of the trucking yards come daybreak. Les was in the lead, cracking his whip, and warning residents who still slumbered to rise and shut their front gate. Those who ventured out in pyjamas got to watch the procession pass-by without incident, but there was a run of houses still sleeping soundly and a wing of cattle broke away from the main group and caused commotion in those pretty gardens, the soil all damp and springy from recent rain.

The stock route either side of the Bruxner Highway heading east is narrow and windy at best, and at times comes too close to the road for comfort. Until the cattle put their heads down and settled into a pace there was work to do.

At Crooked Creek the mob paused to have a feed on the relatively generous TSR at that locality and in the night Mr Rogan received word that he was a father again, with his third-born son resting at his mother's breast in Casino hospital.

The horseman jumped into an internal combustion vehicle and made the journey to town where he poked his head in at the birthing ward before celebrating with rodeo mates at the Commercial Hotel. On the same day, full of good cheer, the proud father went to the police station to register the birth but in his euphoria marked the boy down on the wrong date!

Back on the road the drovers made for Sandy Hill, where a wide valley surrounded by bush provided a feed and a chance for some horse trading with Mr Rogan's old mate Tim Scherf, who offered a great gelding named Tim that later proved his worth in campdraft.

Where Red Rock Road joined the highway the mob was allowed to spread out and they meandered along, nibbling at the bush and taking their mind off the job, when the lead animal blundered into a neat stack of bee boxes, upsetting their contents and scattering man and beast to the bush.

"I could her the dogs yelping way off in the distance," recalled Mr Rogan. "It took us two days to round up all the cattle and another before the swelling around my eyes went down!"

Drivers are mostly stupid or rude when it comes to negotiating cattle - often both - and just above Drake, where the road is particularly narrow and winding an impatient traveller came close, tooting his horn.

The offsider walked his horse into the man's path and sat tall in the saddle. The driver wound down his window and gave the drover a gobful but quick as a flash Les flicked the whip into his good hand and took a swing with the butt handle, narrowly missing its target. The impatient traveller proceeded more carefully.

The going became easier from here on, straight and wide with few obstacles and the mob put its collective head down and focussed on the road ahead, eventually turning into the gate at Emu Creek and enjoying a respite in the grass - but not for long, as old Mr Norman always had an eye for a buyer.

"I learnt not to become attached to cattle because Tom just traded constantly," recalled Mr Rogan. "He would always buy second grade cattle and make them better ... and then sell them!"