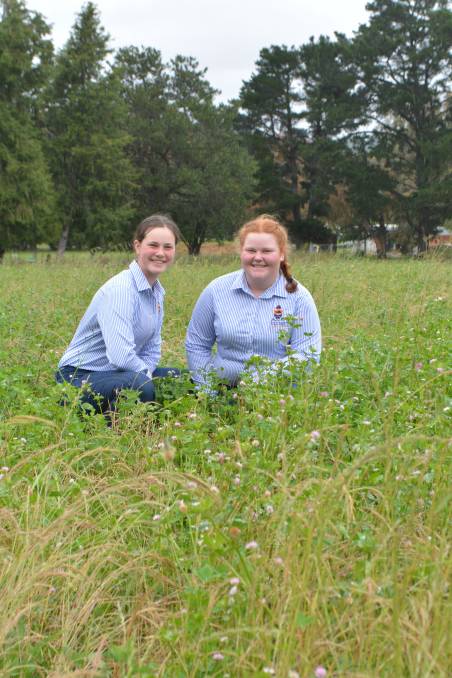 Utilising a dung beetle project along with regenerative ag practices within their pasture production and grazing system, the school has identified opportunities to boost production all while improving the condition of the land.

OAGS agriculture teacher Sarah Eyb said it all started when she recognised they needed to have a rethink about how to better manage the school system.

"I took students to Chris Hall's property at Young, and he really has demonstrated that by managing our ecosystems we can increase production," Mrs Eyb said.

"We had a very similar site here; we had an old orchard site that had been pulled out so a very uneven distribution of top soil.

"The soil was fairly dead and lifeless - there had not been a lot done - so it was all about building that soil microflora."

The OAGS partnered with NSW Environmental Trust and Central Tablelands Landcare in a dung beetle project, which forms an integral part of the school's whole system approach to regenerative ag.

With a local site farm partner just up the road at Wayne and Jenny Petrie's Orange-based property, Mrs Eyb said the school has breeding holes and test sites, while the Petrie family is commercially breeding the beetles.

"A lot of people, myself included, didn't realise just how much of an impact soil flora and fauna has on soil fertility and soil health.

"Particularly in terms of sequestering carbon and reducing the need to drench, because the dung beetles are taking the manure under the ground so the worms have gone with them and are broken up.

"If you see the dirt where it has been through the dung beetles it is just phenomenal."

Mrs Eyb said there has been a huge increase in soil structure from a very compressed basalt clay to beautiful rich red dirt after the dung beetles in the nursery have taken the manure down and brought to the top perfect little beds.

The dung beetle nursery was built by Cowra Men's Shed, and the winter active dung beetles within it are fed continuously through winter while on rarer occasions in summer as they become dormant.

Nine core sites are located on the OAGS site which are pulled up and the dung beetle larvae are counted.

"The plan is to have those ready for release for regional farmers to keep dung beetles working all winter," she said.

With students studying agriculture that have different backgrounds and interests, the introduction of the concept of regenerative ag alongside traditional farming methods has allowed students to broaden their knowledge and understanding.

It is all about challenging perceptions and offering different ways of doing things, Mrs Eyb said.

"It was even a challenge for me when we grew millet to start with to get hay. When the millet re-grew it was so tempting for me to throw sheep in there and feed it off - it was so hard to say no.

"We had a heap of kids that were saying what are you doing wasting that millet - it was hard for everyone.

"But once the first frost hit and the millet fell down we had under sown and the lucerne, vetch and clover came away beautifully, so we had feed over our ears."

Mrs Eyb said by letting that millet rot down, the organic matter in the soil has improved out of sight in one year.

Students are visually seeing and experiencing the difference regenerative ag practices can make.

"We are not spraying that paddock and we are deliberately comparing out pasture out the front which is being managed traditionally to the block up the top which is managed as regen.

As the paddock was very nitrogen deficient, they had to come in heavy with a legume base which.

"Because of this we stripped graze to be cautious of bloating," she said.

"We stripped grazed front and back, which also gave the kids those skills too in using the paddock efficiently - by the time they got to the last strip, the first strip was ready to go again."

The OAGS recent school-grown boxed lamb product was finished on this pasture.