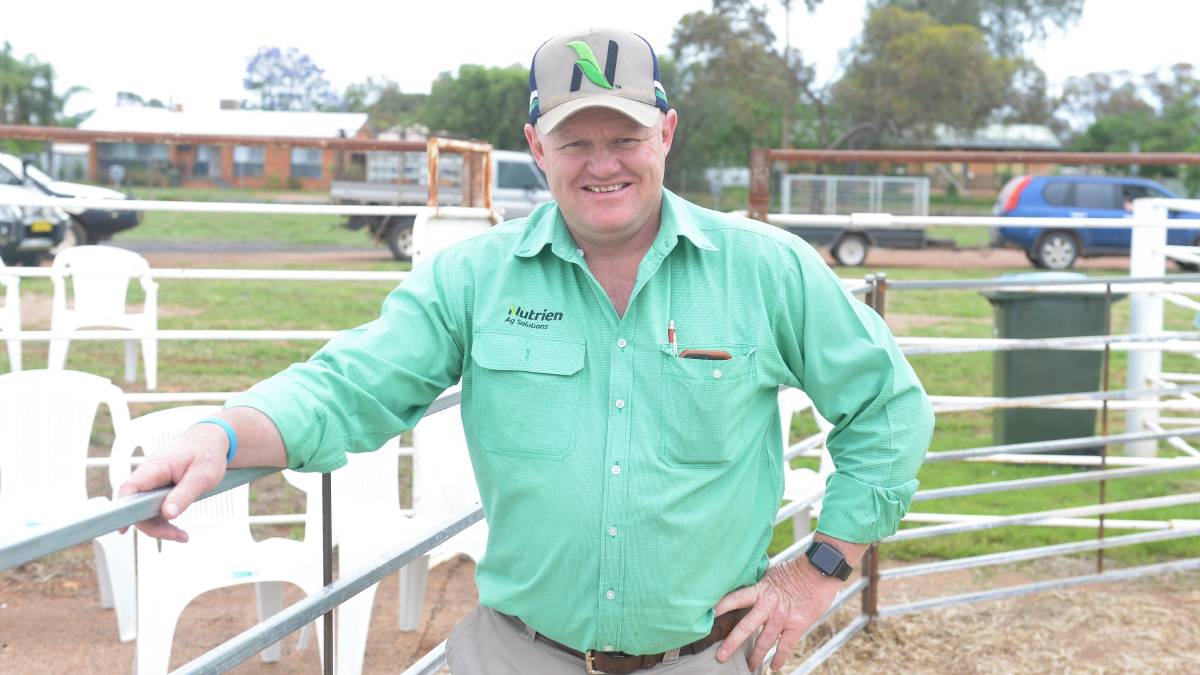 Nutrien stud stock manager John Settree, Dubbo, said working as an agent is a challenging yet rewarding career path, with 2021 being the most rewarding in the last 10 years. Photo: Kate Loudon

Based at Dubbo, Mr Settree was born and raised at Taralga on a sheep and cattle property where his parents ran a Hereford stud.

"I always wanted to be an agent from 14-15 years old," he said. "My cousin, James Croker, and I always spoke about it. I guess it was meant to be.

"I remember the time an old agent at Taralga, Ken Craig, came out and offered dad $5 for some sheep back in the early 80s and then jumped in a car off to Narromine to buy sheep. I looked at it and thought it was a good lifestyle, travelling around the countryside doing stock work and buying and selling."

Mr Settree started his career in 1996 with Wesfarmers, Dalgety, at around 25 years of age.

"I applied for a number of jobs at Yass, Armidale and got to interview stages but never got the job," he said.

"Once I got the job, I did a few more courses to become an AuctionsPlus assessors and attended young auctioneer schools.

"I was one of the last ones to go to Sydney and do my licence. At that stage it was a three month course and I lived in Sydney and did it five days a week, whereas now it is online and agencies have their own licensing courses."

"When I started in 1996, we were given a $25 Telstra card to ring buyers at the saleyards to tell them '2000 head tomorrow, so many weaners, cows, etc'. My first phone was a bag phone.

"But as we have seen time and technology change. We used to make all phone calls at home at night - we'd get home at 6pm and be on the phone till 10pm every night.

"Now the use of emails, text messages and mobiles means we do it all more efficiently throughout the day."

While being an agent is a rewarding job, Mr Settree said there isn't the uptake of people wanting to be an agent as there used to be.

"When I was applying for jobs there was 60 applicants, 12 chosen to be interviewed. Now it is different," he said.

"You have got to have a real passion. You have to be a good stockman first, but you have got to want to talk to people, articulate yourself well and use technology.

"Most good agents, whether they wear red, green or blue shirts, know the business, the family, and they know what there clients are wanting to do and why they want to do it."

In his current role for 15 years now, Mr Settree said his background in stud stock and 10-11 years of commercial backgrounding meant he had a well-rounded level of understanding and experience which worked well in the stud stock sector. His is also an auctioneer at a number of sales across the state, many of which broke records this year.

"Back when I started, to become an agent you had to have a selling string to your bow. I ended up then travelling around selling at a lot of southern weaner sales," Mr Settree said.

"Then around Goulburn I sold at a number of stud sales down there, while still a commercial agent. When I moved to Dubbo it became a stud stock auctioneer role."

Mr Settree has had "quite a few" people he has looked up to over the years including the late Kevin Coves who is a big reason why he wanted to be an agent.

"I was employed by Richard Norton, who was one of my first mentors, he went on to be the boss of MLA," he said. "Mark Barton and the late Garth Hughes are others. When I moved to Dubbo some of the best help and support came from the late John Horne.

"Although an opposition agent, he helped me and in Horney's honest brutal ways he had a lot of help to give.

"I've watched Paul Dooley from a distance doing it for 40 years."

Mr Settree said working as an agent is a really challenging career path, but it is a very rewarding one especially when you get to the end of a sale and it has grossed hugely, averaged highly and everything sold well.

This year the best part of the job has been the results, while the hardest part has been COVID according to Mr Settree.

"We have seen 100 per cent clearances, averages were up and records were broken in just about every breed, both sheep and cattle," he said.

"Lockdowns and the uncertainty, although we were classified essential services still caused angst, concern and worry among clients and vendors, but also among purchasers, especially between states," he said.

"The state boundaries were closed then opened or so highly regulated, and there was no uniform way of going about things."

From a stud stock perspective, Mr Settree says the industry is evolving to see a lot more emphasis being put on genetics and what suits Australian conditions and markets.

"I've seen some of the biggest studs get bigger and better, and that is because they have used technologies, such as EBVs and parent verification, to identify through DNA those genetics and breeding lines that work, and push to offer more of those genetics year on year on year," he said.

With stud sale averages jumping 30-50pc, he hopes the Australian producer realises the value of genetic gain from investing in quality stock.

Since buying $15,000 plus bulls, he hopes producers really look at the offspring and realise they may have paid 50-100pc more but the progeny are 100pc better.