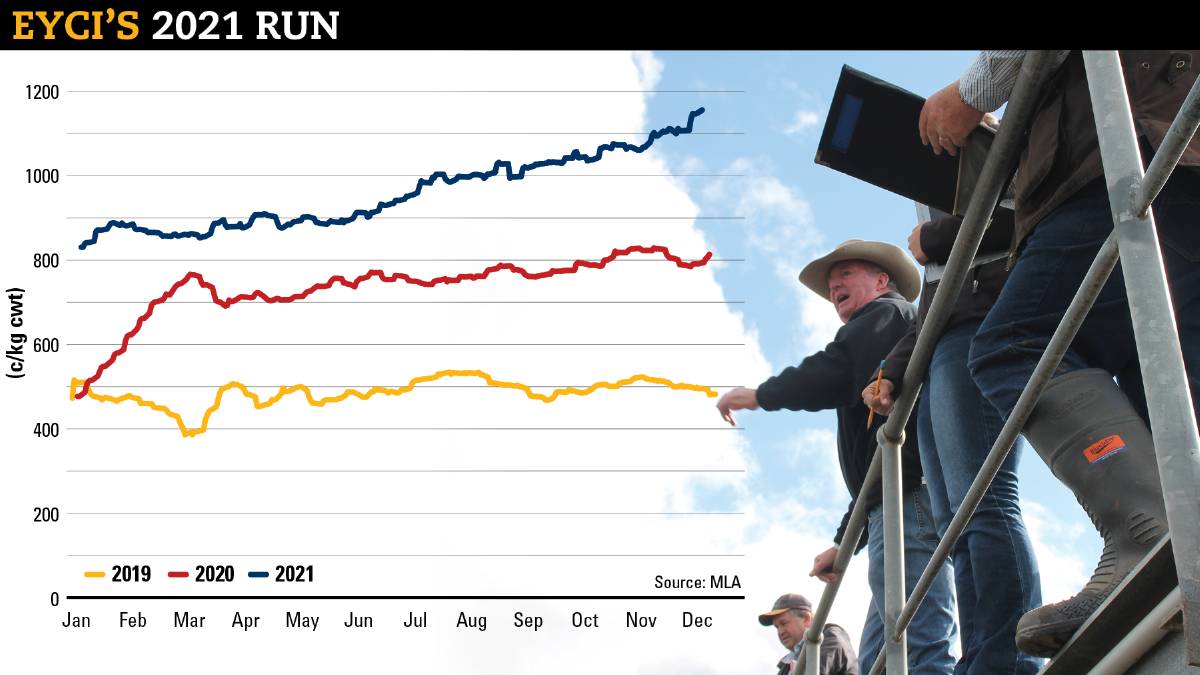 We've hit a new normal but 2021 will never be repeated

DEMAND so red hot it it outweighed the effect of supply.

This was the cattle market story for 2021, a year when records were broken over and over again and across all categories.

Every time it rained, grass fever sent restockers on another buying frenzy. At the same time, demand for Australian beef in global markets, particularly grain-fed, was so strong that feedlots and processors were desperately trying to secure supply.

By year's end, agents and analysts were saying that even a yarding of 10,000 head in several of the country's big saleyards in the one week would not dent the market in a significant way.

It would just bring more people out to buy because there are still plenty of empty spots in grass-rich paddocks.

The benchmark Eastern Young Cattle Indicator finished 2021 in the same style it spent much of the year - on a run of daily record-breaking feats.

Battling floods and heavy rain to save crops on the Macquarie

While analysts, and even agents, have lost interest in nitpicking the top for the EYCI and are talking more the 12 month to five-year outlook, most do seem to think January will see some more upward movement.

A 10 to 20c jump, at least, is on the cards, they say, particularly given plenty of Queensland producers with feed have barely started buying yet and will be desperate to get cattle in paddocks in the new year.

How far south they will travel for supply will be interesting to note.

At the start of 2021, it was La Nina flexing in Queensland that saw weaner prices rocket in Victoria.

When the EYCI set a new record of 830c in the first week of the year, predictions were it had hit a peak.

That same prediction was repeated over and over through the year, and every time turned on its head.

By December no one was uttering the word 'peak' anymore.

Supply was always tight but even during the periods when it did lift, there was little effect on prices. Demand consistently absorbed the numbers.

Towards the end of March, big widespread rains were keeping cattle out of yards and the EYCI was in the late 800s.

By late May, after it had tipped over into the 900s, it was declared that Australia had the most expensive cattle in the world.

People were saying that while there was no question it was local conditions - that is, short supply pushing up against red hot restocker demand - that was driving young cattle prices, the potential for solid global red meat prices also has an underpinning effect.

The much-touted $10 mark was breached in late July and the sniff of more rain was making restockers go hard.

It tipped over $11 in November, by which time agents were predicting very little of the typical saleyard throughput rise leading into Christmas. Everyone knew the strength in young cattle prices would hold up but more rain sent it even further into the stratosphere.

Yarding sizes did lift in December, although they were still only on par with the five-year average and the added supply, once again, was no match for the strength of demand from grassed-up producers.

Restockers simply belted each other on the rails, one agent said of the last week of trading in 2021.

While those who have been in the industry for a length of time say the Australian cattle market has reached a new normal, they agree there will never be another year like 2021.