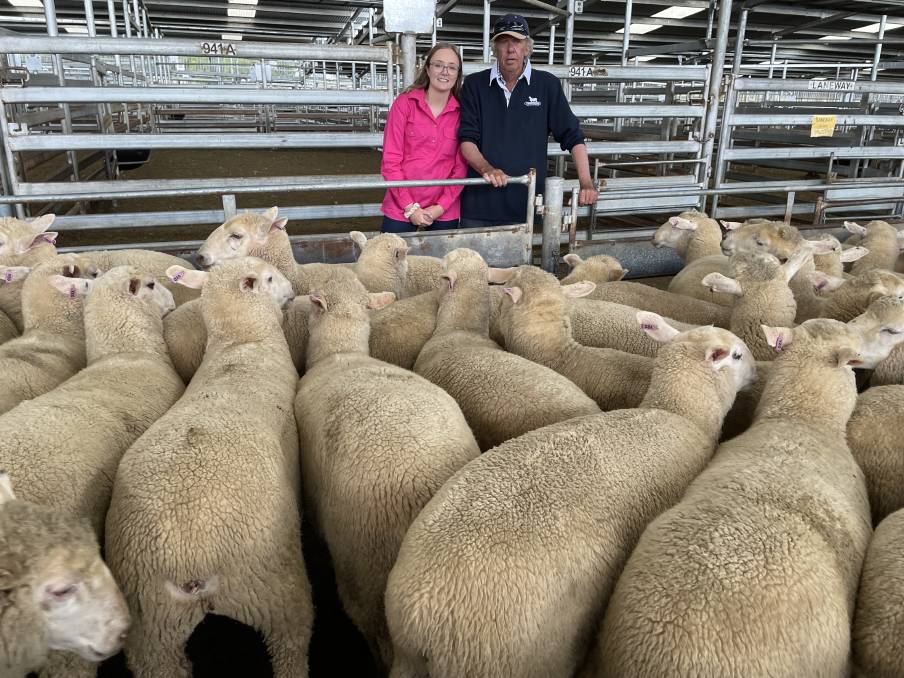 Gemma O'Brien and her father John from Crookwell with their pen of 106 one and half year ewes sold for $410. Sired by Jerradale Border Leicester rams they were bought by a repeat buyer for the third year.

There was one hundred per cent clearance of 8428 first-cross ewes at SELX Yass.

A very damp day didn't stop prime lamb producers from lining up at the opening sheep sheep for the south where 8428 first-cross ewes and ewe lambs went under the hammer at SELX Yass, on Friday.

The sheep presented varied in condition, but overall the market was described as "steady" by Greg Anderson, director MD and JJ Anderson, Crookwell`

"There were some good prices but overall I think the market was back $20 to $30 and more in some places," Mr Anderson said.

"It was not a consistent sale - but those ewes with a good reputation sold well to repeat buyers and we sometimes had three or more bidders on a pen. The older ewes sold on par with our previous sale."

It was not a consistent sale - but those ewes with a good reputation sold well to repeat buyers and we sometimes had three or more bidders on a pen. - Greg Anderson, director MD and JJ Anderson, Crookwell

The top priced one and half year old ewes at $410 were sold by John and Sue O'Brien, Crookwell to repeat buyer Neil Cummins, Laggan.

The O'Brien's have a draft for this sale each year and although last year's offering made $430 Mr O'Brien was very happy with the sale on Friday.

"Our ewes were better presented last sale - it has been a bit too wet for these ewes and they weren't quite as good condition but I'm still very happy with the sale," he said.

Mr Cummins said the quality and the presentation of the O'Brien ewes was exceptional.

"They are very good mothers and stand over their lambs," he said. "I will join these ewes to Southdown/Charollais rams - you've got to get a lamb on the ground from your maiden ewes."

Other good prices for the one and half year ewes included $370 for 92 October-shorn ewes sold by VM McCallum, Bannister: 185 March-shorn ewes sold by Bindawalla Pastoral Co., Narrawa, for $350 and Shane and Gwenda Romer, Sunbury Border Leicester stud, Crookwell, sold 112 September-shorn ewes from Adina/Boudjah-blood Merino ewes for $360. A pen of 77 November-shorn ewes with 81 second-cross lambs sold on account Woodville Pastoral Co., Binda, for $370.

In the pens of ewe lambs, top price at $335 was secured by the Kember family, Ganmain, when their pen of 216 was bought by a repeat buyer.

The October-shorn April/May '21 drop ewes weighed 57kg and were sired by Gleneith Super Borders and were out of large framed Merino ewes bred in the Hay district.

Another good sale was recorded by Pat and Sue Dwyer, Boorowa, when they received $244 for their pen of 94 April/May '21 drop, October-shorn and sired by Shamrock/Retallack Border Leicester rams out of Koonwarra-blood Merino ewes.