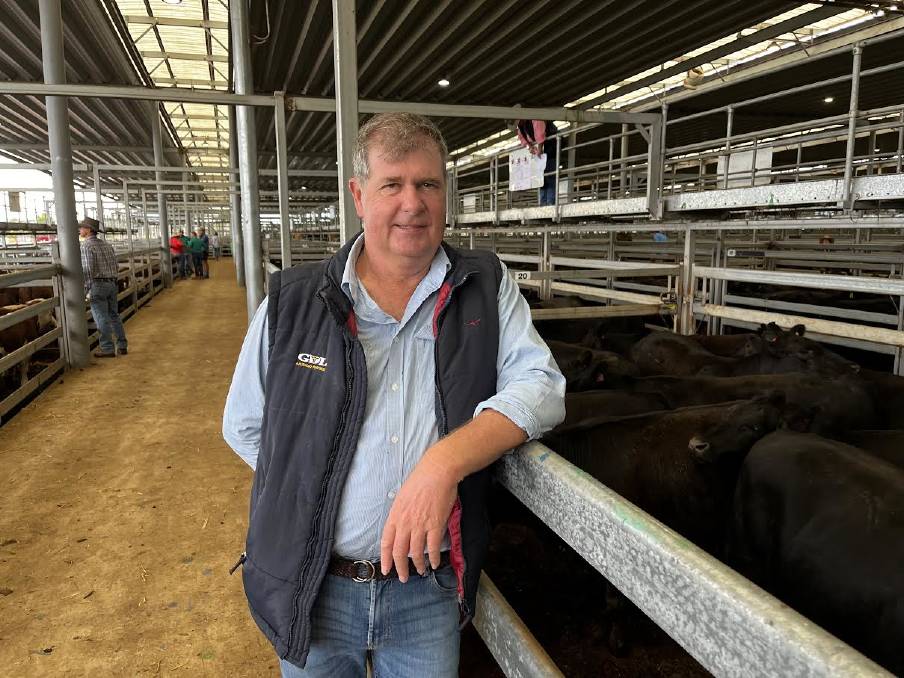 Jeff Garland, GDL Toowoomba, Qld, bought 180 steers and heifers on the first day of the weaner sales, and was looking to buy more. Photo: Bryce Eishold

Northern NSW and Queensland restockers and feedlots made their presence felt at the Wodonga weaner sales last week taking home a big proportion of the calves offered and putting a solid floor in the market.

NORTHERN NSW and Queensland restockers and feedlots made their presence felt at the Wodonga weaner sales last week taking home a big proportion of the calves offered and putting a solid floor in the market.

Victorian border restrictions in 2021 stopped NSW and Qld buyers from attending the sales last year, and it was clear this year buyers were keen to make the trip south to buy in person rather than online.

Nutrien agent Andrew Holt, Injune, Qld, said the cattle market was being driven by lot feeders, but northern graziers were also responding to a good season.

Mr Holt said properties as far north as Barcaldine in western Qld had received significant rain at the end of November and his clients were now chasing black heifers to join.

Meanwhile, Jeff Garland, GDL Toowoomba, Qld, was active on both the steers and heifers across several days at Wodonga.

Mr Garland said the steers were going into a backgrounding operation, while the heifers were destined for a breeding program.

"We picked up 320 Angus steers, 180 Hereford and crossbred steers and a run of 52 very good Angus heifers," Mr Garland said.

"Potentially they were all backgrounders, except for the heifers which will grow out a bit and be joined up to Angus or Wagyu bulls."

"Two clients background for themselves for their own feedlot operations and one just backgrounds and sells them six or seven months down the track into the feedlot market."

Nathan McConnell, Elders Tamworth, said he was looking for weaned calves over the unweaned pens.

"Although we bought a mixture of weaned and unweaned, going forward we're probably chasing more weaned cattle," he said.

"We're in a bit of a spot up here [northern NSW/Tamworth] in that the majority of our calves won't come through until March onwards.

"So we've got the next three months of not too many big runs of weaner cattle about."

Mr McConnell has become a regular in recent years at the northern Victoria sales to source cattle for his northern NSW client base.

"They put the cattle onto grass and in 10 to 12 months time they sell them back out as feeder cattle to Killara."