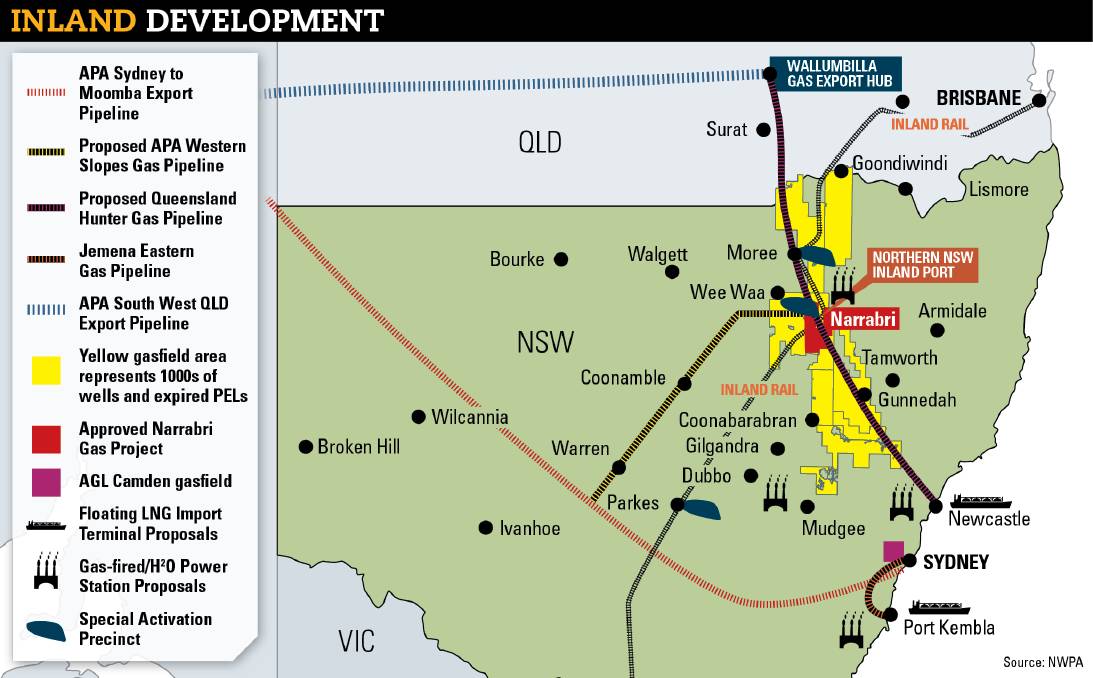 This map commissioned by North West Protection Advocacy shows the footprint of gas pipelines and licences as well as other major infrastructure developments including Inland Rail and Special Activation Precincts on NSW.

THE recent buyback of prime agricultural land by farmers on the state's Liverpool Plains has prompted calls from advocacy groups for the region to be spared from future gas projects.

Land owned by Chinese mining giant Shenhua for its recently cancelled Watermark coal mine was purchased by 12 local farming operations as well as one corporate institution for a total of about $120 million.

The sale came after the state government and Shenhua agreed in April last year that the mining giant would return its exploration license and withdrew its mining license for the site, prompting former Deputy Premier John Barilaro to say at the time there would be no "mining here on the Liverpool Plains, it's the end of the saga. Full stop. Full stop."

However, advocacy groups such as North West Protection Advocacy and Lock the Gate Alliance claim the area is still under threat from gas extraction and are calling on the state government to protect the district from gas projects.

"The Liverpool Plains is a nationally significant food bowl and the NSW Government's cancellation of plans to ruin it with coal mining was a huge relief, but the farming future of the Liverpool Plains will not be secure while it remains under threat from coal seam gas mining," NSW Lock the Gate Alliance spokeswoman Georgina Woods said.

"To safeguard this foodbowl forever, the Perrottet Government must also now cancel the remaining 1.1 million hectares of gas licences that hang over a large area of the North West, much of which is on the Liverpool Plains."

Ms Woods said another pressing issue that needed addressing by the state government was the protection of several sacred sites, which were threatened by the Watermark project.

"The area also harbours significant cultural sites for Gomeroi people and when then Deputy Premier John Barilaro announced the deal to stop the mine he promised these sites would be protected," she said.

"We urge the government to fulfil this commitment and make sure these sites are protected. Gomeroi people must be able to access and secure their cultural heritage for generations to come.

"As the climate crisis intensifies, the last thing governments should be doing is sacrificing arable land and productive water resources to fossil fuel development. The Perrottet Government must cancel the remaining gas licences in NSW."

NSW Farmers president James Jackson echoed the call, saying the organisation was pushing the state government to remove the threat of PELs in the region.

"In our representations to government, we have reinforced the long-term nature of agricultural decisions and investment," Mr Jackson said.

"The doubt caused by the renewal of PELs in these areas severely undermines the ability to achieve these goals."

"The NSW Government's future of gas statement has reduced the area of land covered by PELs by 77 per cent," the spokesperson said.

"The return of prime agricultural land to local farming groups is another win for the community and vindicates the government's decision to rule out coal mining on the site."