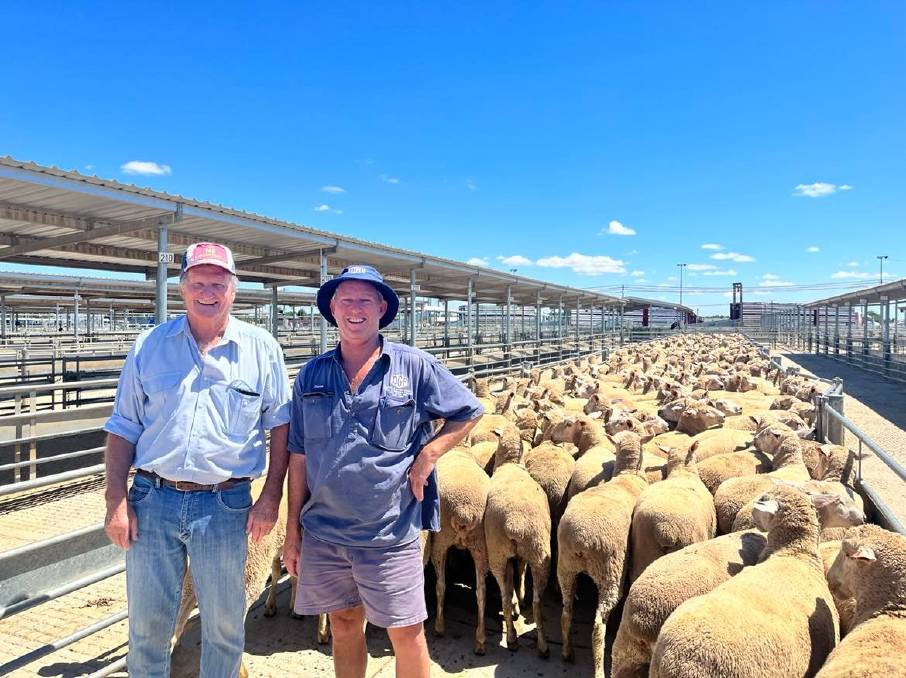 Peter McDonald, Young, pictured with carrier Darren Godsell, DFG Transport, also of Young, bought 320 June/July '20 drop, November-shorn, first-cross ewes scanned-in-lamb to Poll Dorset rams to a top of $500 a head. The ewes were offered by Robert and Sherrie Clemson, Lilydale, Burcher, and purchased on behalf of a producer at Young.

Forbes agents cleared about 28,000 first-cross ewes on Thursday in what was a cracking start to the selling season.

IT HAS been a cracking start to the selling season at Forbes where about 28,000 first-cross ewes sold to good competition at the 43rd annual first-cross ewe sale on Thursday.

"There were still buyable sheep for a lot of people.

"The market could have been $30 or $40 [a head] back on last year's extreme result but it was still very strong."

Top money for young unjoined first-cross ewes was $452 a head for the lead draft in the 1700 March/April 21' drop, November-shorn, first-cross ewe lambs sold by the Jones family, The Troffs, Trundle.

The pen of 222 also took out Forbes Show Society's Glamis Border Leicester stud trophy for the best presented pen of first-cross ewes - a prize the Jones family have been awarded five times in the last six years.

Bred from Darriwell ewes and by Glamis Border Leicester rams, the entire draft of 1700 averaged $410.

The Morrisons have bred first-cross ewes for the sale at Forbes for 21 years and on Thursday also sold 130 June/July '21 drop, November-shorn, first-cross ewe lambs to $272.

The Quade family, Roseneath, Trundle, sold 630 March/ April '21 drop, November-shorn, first-cross ewe lambs to $378 to average $335. They were out of Centre Plus Merino ewes and by Glamis Border Leicester rams.

In other sheep news: 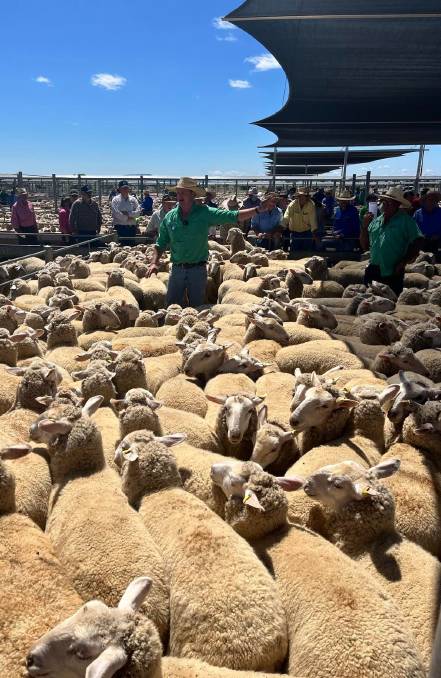 KC and BL Jones, Ashford Neath, Trundle, sold about 400 October/ November '20 drop, December-shorn, not-station-mated first-cross ewes to $412 to average $399. They were out of Mumblebone Merino ewes and by Glammis Border Leicester rams.

In the Merino section top sale was from Les and Kerry Gould's four and a half-year-old, March-shorn Braeside-blood SAMM ewe flock which realised $345.

Mr and Mrs Gould of Lana, Burcher, sold about 1000 Merino ewes in a flood dispersal on Thursday with rising waters from Lake Cowal through the Lachlan Shire. They averaged $293.