The Wallace family takes third win of Mid Lachlan Flock Ewe Competition which is in its fifth year. 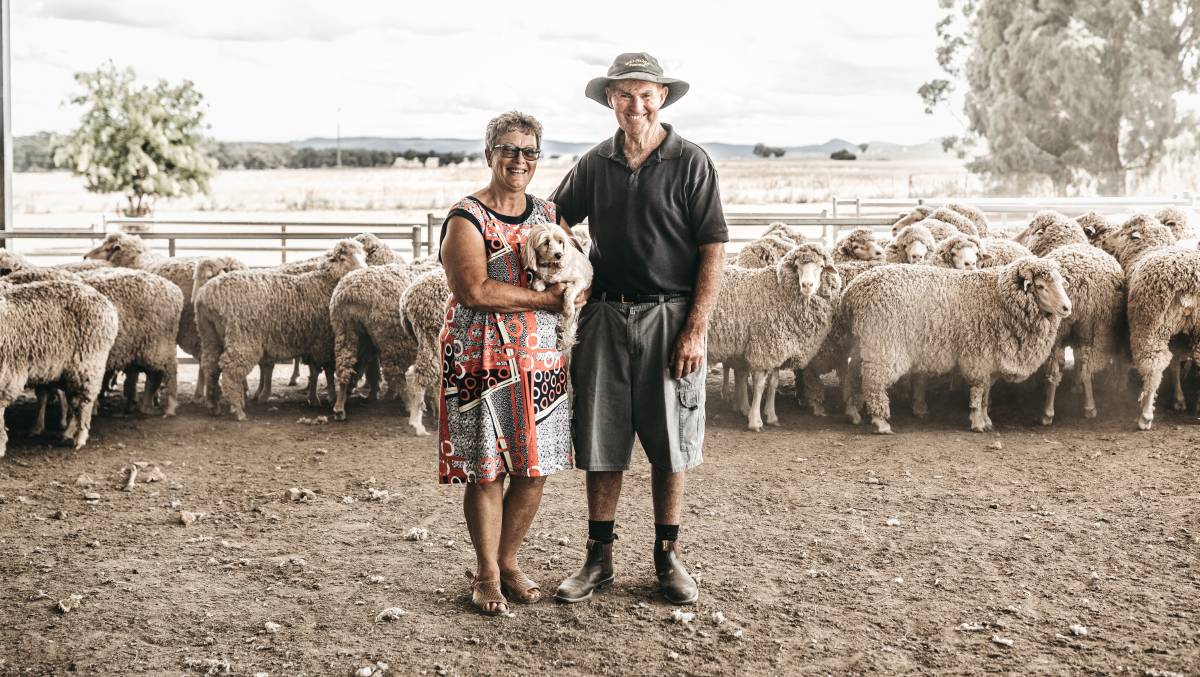 Focused on breeding a big framed and reasonably plain Merino ewe that is suitable for both meat and wool, the Wallace family of Melrose Pastoral have clocked up its third win of the Mid Lachlan Flock Ewe Competition.

Graeme and Maureen Wallace along with their son Adam and daughter-in-law Sarah run flock of 5000-odd ewes of Lach River bloodlines, and target a 19.5-micron fleece with an average greasy wool cut of 8.3 kilograms

The Wallaces' enterprise is mainly sheep, but they grow around 810 hectares of grazing crops. All cull ewes are joined to a terminal White Suffolk sire, while the rest go to Lach River Merino rams which they have been on for eight years now.

Kicking off the 2022 Merino flock ewe circuit, the Mid Lachlan competition was held on Thursday and Friday last week and drew in 11 entrants and over 50 spectators from across the region.

"The judges said they were well covered, nice long barrelled sheep that were solid across the back end," Graeme Wallace said.

Taking part in the event since its inception five years ago, the Wallace family has won three times and were the runners up the other two.

On display they had 750 March 2020-drop ewes which Graeme described as possibly the best line up of ewe hoggets they have produced.

Return judge Mr Phillips said they were a very even, top line of sheep that were well structured with a lot of good typed wool.

"They were a great flock of sheep with heavy cutting bright wools," he said. "They were well classed and well managed, and were very even. They were even better than last year."

Mr Wallace said the wet weather had been hard on the sheep's feet, but they have managed to stay on top of it running using zinc sulphate foot baths.

Managing to dodge the heavy rainfalls last week, the contingent touring the Mid Lachlan flocks luckily only had to look at one set of wet sheep.

Mr Wallace said they were fortunate to be on the first day, as over four inches of rain fell on the Friday.

Mr Phillips said it was a great couple of days and he noticed an improvement in all the sheep in the last 12 months.

"It was a great season (over that time), but all the flocks were well managed and the people are passionate about doing it," he said.

Runners up in the competition were Andrew, Erin and Shirley Green of Clear Hills Pastoral, Kalinda, between Cowra and Boorowa, with their Roseville Park blood ewes from their 18.8-micron average flock which cuts on average 7.4kg of greasy wool.

They displayed 220 July 2020-drop ewes, with Mr Phillips saying the Green family's ewes were probably some of the best wooled sheep they saw in the whole competition. "They had beautiful well-nourished wool, but didn't have the scale of the winning team," he said.

The Clear Hills flock also won the eastern sector award and the peoples' choice east award. They have previously won the award in 2020.

Third overall went to the Koonwarra and Winyar-blood flock from Windridge Farms, Templemore, while the encouragement award was presented to James Wright of Springfield, Grenfell.

The Wright family were also winners of the short wool category with their Brundanella-blood ewes .

The 14th annual ANZ Agribusiness Crookwell Merino Flock Ewe competition is going ahead on January 19-20, and will be followed by the Lake Cargelligo Maiden Merino Ewe on January 28.