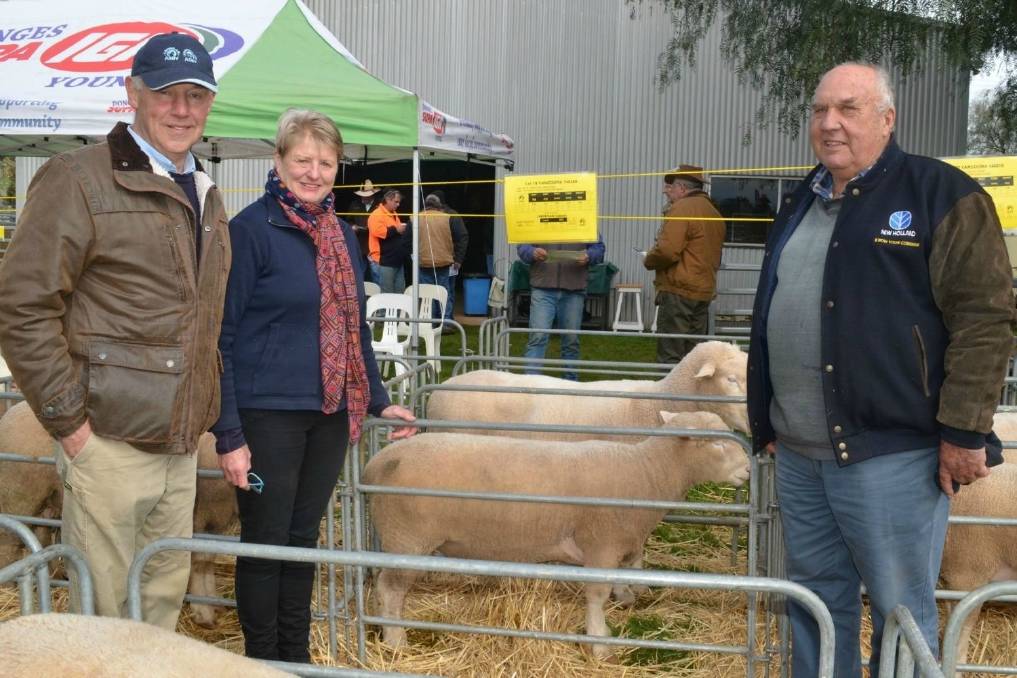 Paul and Kate Sevier, Yangoora Gromark Genetics with Malcolm Wooden "Kurrambee" Junee with the equal top-priced ram he purchased for $700

Strong interest in terminal sires at the ''Yangoora'' Gromark Genetics ram sale pushed buyers to a top of $700.

Strong interest in terminal sires at the Gromark Genetics ram sale pushed buyers to a top of $700, with a total clearance of he 57 rams offered at average price $455.

Mr Wooden said he was attracted to the top priced Gromark Genetic rams for their excellent figures and good conformation.

The combination of low birth, growth rate and fat measurements according to Lambplan ASBV's appealed to Mr Wooden.

He intends to join his draft of six Gromark rams purchased for average price $533 to his Merino ewes as terminal sires and targeting the sucker market.

"I am aiming for less trouble at lambing out of the Merinos," Mr Wooden said.

"I want quick growth from the lambs for the sucker market."

Other buyers included the Wilder family from Grenfell who purchased three rams to equal top price of $700 and average $500.

Scott Byrne, "Allawah" Wallendbeen put together an even draft of four rams at average $500 and Andrew Jarrott, "Oaklee" Bribbaree who selcted three young replacement sires to top of $600 and average $466.

Stud co-principal Kate Sevier was very pleased with the result.

"The rams were selected for specific enterprises and it was thrilling to see new and repeat buyers filling their needs," Mrs Sevier said.

"They liked the fact the wool is white and crimped and not a downs wool, especially to give a higher return when breeding a prime lamb dam out of the "Yangoora" Gromark Genetics/Merino cross."

The story Gromark rams to $700 first appeared on Farm Online.