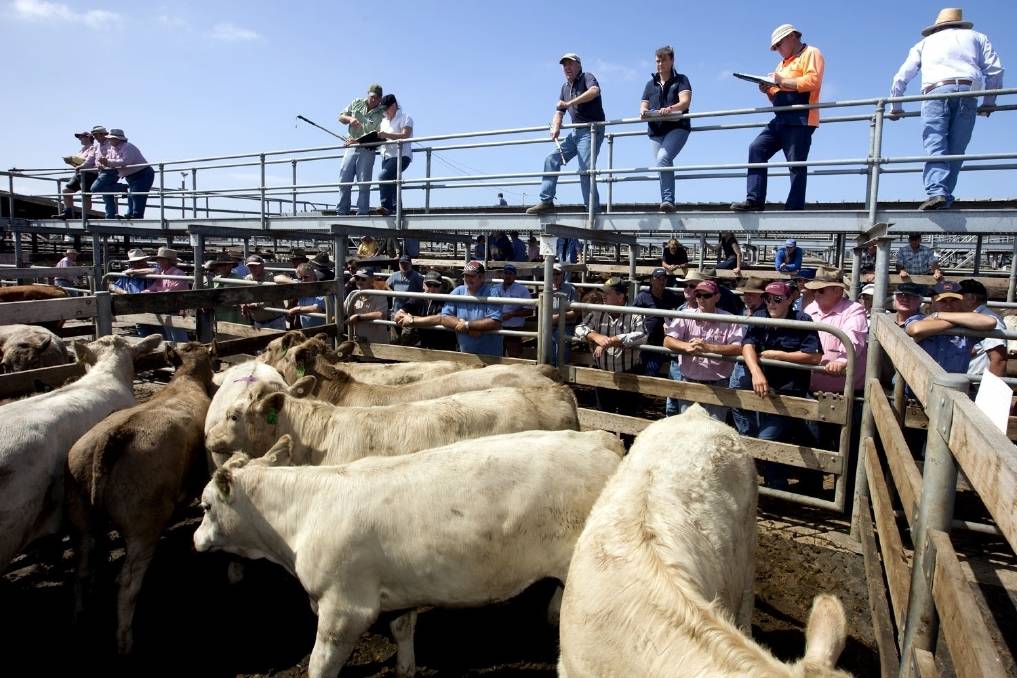 EL NINO may not be making its presence felt just yet but some livestock producers are nervous and opting to sell while prices are strong.

EL NINO may not be making its presence felt just yet but it's making some livestock producers nervous and they're opting to sell while prices are strong.

The big numbers of stock flowing through the saleyards has bucked the seasonal trend which usually results in tightening numbers at this time of year.

As a bonus for producers, prices have, on average, continued to lift and across Monday and Tuesday this week the Eastern Young Cattle Indicator (EYCI) managed to climb a surprising 17.25c/kg - one of the highest jumps to date - to close at a new record of 496.25 cents a kilogram (carcase weight).

Then on Wednesday afternoon, the EYCI rose another 5.25c and broke past the mythical 500c barrier to reach 501.50c/kg (cwt).

Many centres across NSW and Victoria were already averaging more than 500c/kg for young cattle, but big lifts at centres such as Carcoar and Gunnedah, plus Roma and Warwick in Queensland, and Shepparton and Wodonga in Victoria fuelled the price lift.

Last week's public holiday also reduced the overall national supply compared to the week before, but when compared to the same period last year numbers were still higher.

Mecardo analyst Angus Brown said last week was the fifth week in a row, and the 19th week out of 24, where yardings surpassed last year's levels.

Normally the EYCI rallied about eight per cent from the start of June to the end of August.

If that happens this year, Mr Brown said current prices would take the indicator to 518c/kg (carcase weight).

He said this was not out of the equation, especially given the rain that's fallen this week.

In terms of price, the EYCI, and most other NSW, Victorian and SA indicators, continued to track sideways at close to record levels last week, with record supply being evenly matched by record demand.

"We have been yarding more than 5000 cattle a week for the past six months," he said, also noting large numbers of cows for this time of year.

He added that most competition was on the heavyweight and well-finished cattle which were becoming limited in supply.

It's a slightly different story in parts of the north.

Davidson Cameron and Company livestock agent Luke Scicluna, Gunnedah, said cattle supply had slowed due to the good start to winter in his region.

"Cattle are on oats crops and feedlot cattle have slowed down," Mr Scicluna said.

He said the supply in Queensland was still high, but most of the Hunter Valley and New England areas were slowing down and closing the numbers gap.

"In one to six months, when cattle come off crop there will be a rise in numbers," he said.

Mr Scicluna said the cattle market had mostly been strong, compared to the feedlot market which had been "very, very strong".

"The cow market has softened, but not too much, there's still a big supply through Queensland abattoirs," he said.