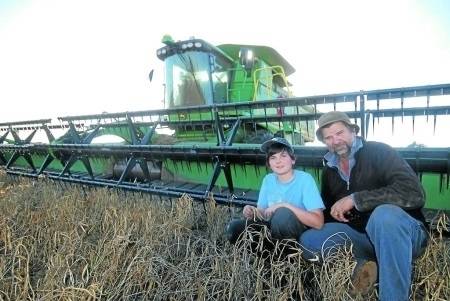 HIGH costs and low levels of skilled labour have are driving interest from broadacre croppers enterprises in automated machinery systems.

Technology in this area continues to evolve quickly, with an Australian-first Yanmar driver-less tractor prototype revealed earlier this year in the Riverina.

But the days of driver-less machines haven't yet been reached in Australia, according to Chesterfield Australia Integrated Solutions manager Paul Slatter, Brisbane, Queensland.

"We haven't quite reached the days of driver-less machines but there is a demand for them," he said.

"We are already seeing steps toward driver-less technology - we won't see a tractor and operator today and then driver-less tomorrow - but it will be a staged progression," he said.

The operator can control the tractor's speed and position from the harvester cab, mimicking the movements of the harvester while it unloads to reduce spillage and to reduce operator stress and potential error.

While the machines still needed an operator, Mr Slatter said the system maximised efficiency and consistency of the job at hand.

"We have the Cemos Automatic which is a feature on the header that allows the machine to keep to its optimal harvest settings and crop throughput all day with minimal operator inputs," he said.

"This has been a great thing for customers with inexperienced operators and to maximise the machine's harvesting potential."

"It configures the machine when it starts work in the paddock and takes into account changing harvesting conditions during the day," Mr Legge said.

"The optimum setting is repeatedly checked and adjusted where needed, carrying out continuous adjustment that no operator would be able to achieve manually."

"If bad weather is coming operators may choose maximum throughput to get the crop off faster," he said.

"It's increasingly important for people to be operating at maximum efficiency and consistency without increasing the amount of time and effort needed to complete the task at hand."

In-sync with cab control at Dubbo

MAINTAINING a level of control from the header cab gives Dubbo contractor Chris Taylor piece of mind at harvest.

"When you've got almost a million dollars worth of equipment, you don't particularly want inexperienced drivers behind the wheel so it's important that I can still have some control from the header cab," he said.

Synchronisation allows coverage map and guidance line data to be shared between machines for simultaneous actions between two or more machines during sowing, spraying and fertilising operations, increasing efficiency in the paddock.

"The system is great if you've got inexperienced drivers because it means the tractor and chaser bin will always be under the augur when you're unloading grain," said Mr Taylor, pictured with his son, Lorcan, 9, harvesting adzuki beans at "Terrabella", Dubbo, for the Stevenson family.

The radio creates an in-field, high speed wireless network to facilitate machine-to-machine communication which can include up to 10 machines for a range of cropping tasks including sowing, spraying and fertiliser applications.

"When you're contracting, you don't want to be spilling a whole heap of grain on the ground otherwise they won't have you back again," Mr Taylor said.