Massive grain train has rolled out of Narrabri and into the record books. +15
It's double the length of a typical grain train and weighs a whopping 5000 tonnes with 73 wagons.

BIG train, big gain: That’s the aim for the longest grain train to haul wheat to port in Australia.

The train, rivalling the coal industry’s heaviest efforts, hauled out of Narrabri this morning and unloads at Newcastle Agri Terminal (NAT) tonight, its cargo bound for South East Asia.

The massive train – which is 1.3 kilometres long – is snaking across the North West farming districts and over the Great Dividing Range to port. 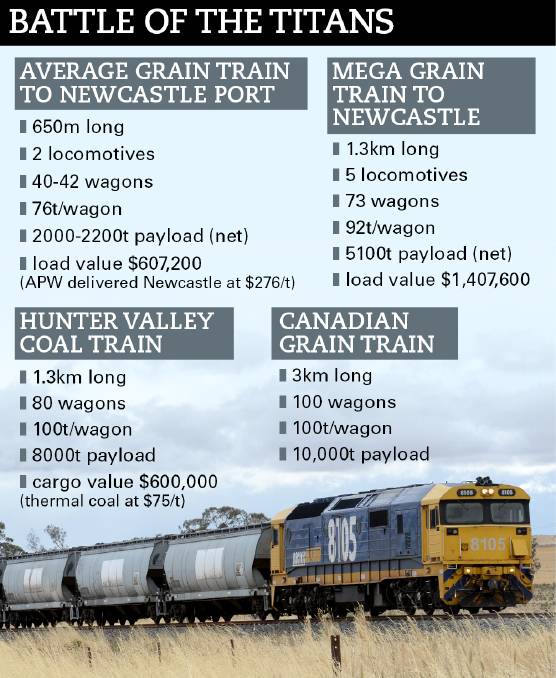 Grain merchant Louis Dreyfus, which uses the Newcastle Agri Terminal (NAT) for exports, supplied the wheat. It was sourced from Moree and Narrabri, the motherload being consolidated at Narrabri before being hauled into port by Southern Shorthaul Rail’s locomotives.

It would likely be a one-off this year to demonstrate the potential to the grain industry, but he hopes to make it the norm in the future.

Mr Carter said a train of this size brought a three-fold increase in network capacity at no extra cost.

Approval was sought for a 2.5 tonne per axle load increase for the up country track which saved growers $1.30/t – welcome relief for farmers, given 30 to 40 per cent of the value of a tonne of grain is consumed by freight costs.

“It would give a 20t increase per wagon.”

He said this proved there was no reason why operators couldn’t amalgamate trains at Narrabri and run them like a coal train.

We’re trying to get the government to upgrade the track to 25t per axle - it is currently 20.2t-20.8t. - NAT executive director Jock Carter

“This gets more payload through in one slot,” he said, explaining the potential existed to hit a 7000t payload.