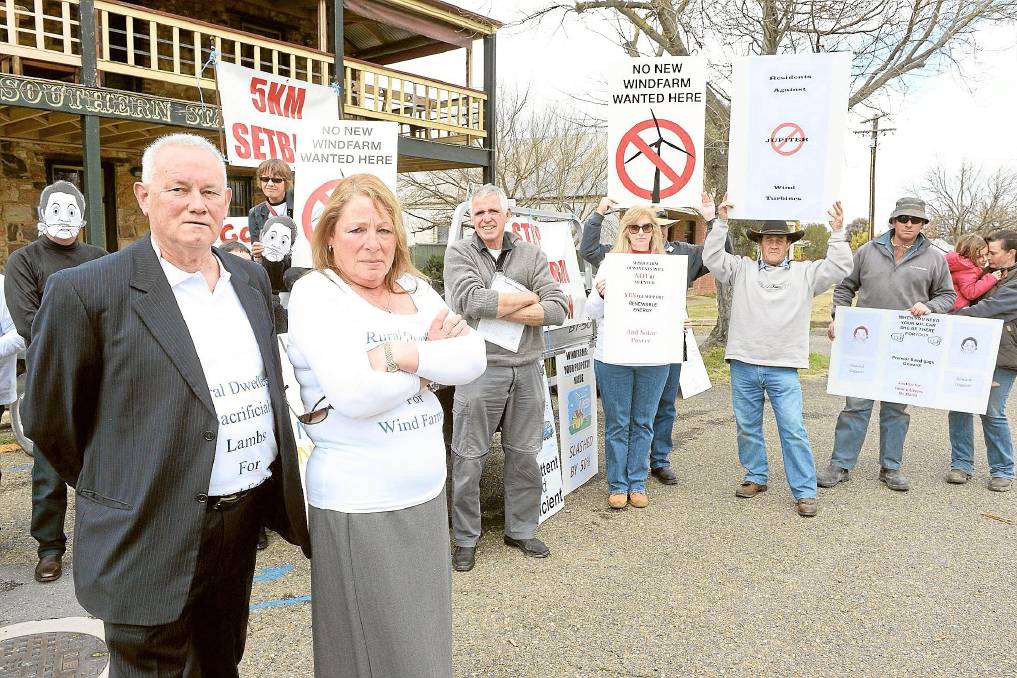 The group of Southern Tablelands residents were protesting against the proposed Jupiter Wind Farm at Tarago, and were joined by landholders affected by the Collector and Gullen Range wind farms.

Protest co-organiser and Tarago district resident Jenny Hajek, of the Residents Against Jupiter Wind Turbines, said about 35 protesters greeted Mr Baird and Ms Goward as they arrived, and 10 protesters were invited to the lunch to voice their concerns.

Ms Hajek described the protest and the consultation with the politicians as “productive”.

She said Mr Baird and Ms Goward listened to the group’s concerns about the proposed wind farm which would have up to 100 turbines.

Ms Hajek said she was also pleased to see so much support from others who attended the lunch – Liberal Party faithful – for their cause.

“Many people came up and said they supported our views,” she said.

She said she appreciated the support of other groups from the Southern Tablelands affected by wind farms.

“They have been able to share their experiences with us,” she said.

Ms Hajek said the group’s key concerns with the proposed wind farm included potential impacts on health and the surrounding environment, as well as on property values.

“We are not against renewable energy – I just think alternative methods can be identified,” she said.

Ms Hajek was pleased with the outcome of the protest, and felt the government listened to the concerns.

She said more protests might be planned down the track, and they had circulated a petition they planned to lodge next month.

“The petition highlights that residents of the Southern Tablelands are not in favour of an industrial wind farm in a non-industrial area,” she said.

Ms Hajek said if the wind farm project went ahead, she would see 11 turbines from her window, with one as little as 400 metres away.

A spokesman for EPYC, the company proposing the wind farm, said the placement of the turbines was being assessed, after which consultation would take place.

As the anti-Tarago wind farm movement gains support from locals, another wind farm in nearby Crookwell is also creating controversy.

The 73-turbine Gullen Range Wind Farm under construction came under fire earlier this year when turbines were built in unauthorised locations (The Land, March 6, 2014, p15) – with some as far as 187 metres from approved sites.

Late last month the NSW Planning and Environment Department announced the Gullen Range Wind Farm modification application would be referred to the Planning Assessment Commission, which would hold a public hearing in Crookwell on September 5.

Further south, preliminary documentation reports for the Yass Valley Wind Farm and stage two of the Conroys Gap Wind Farm, both near Yass, were made available for public comment last month.

A spokesman for Epuron – the company behind the Yass Valley Wind Farm and Conroys Gap Wind Farm – said the next stage of the process would be the development application with the Department of Planning and Environment.