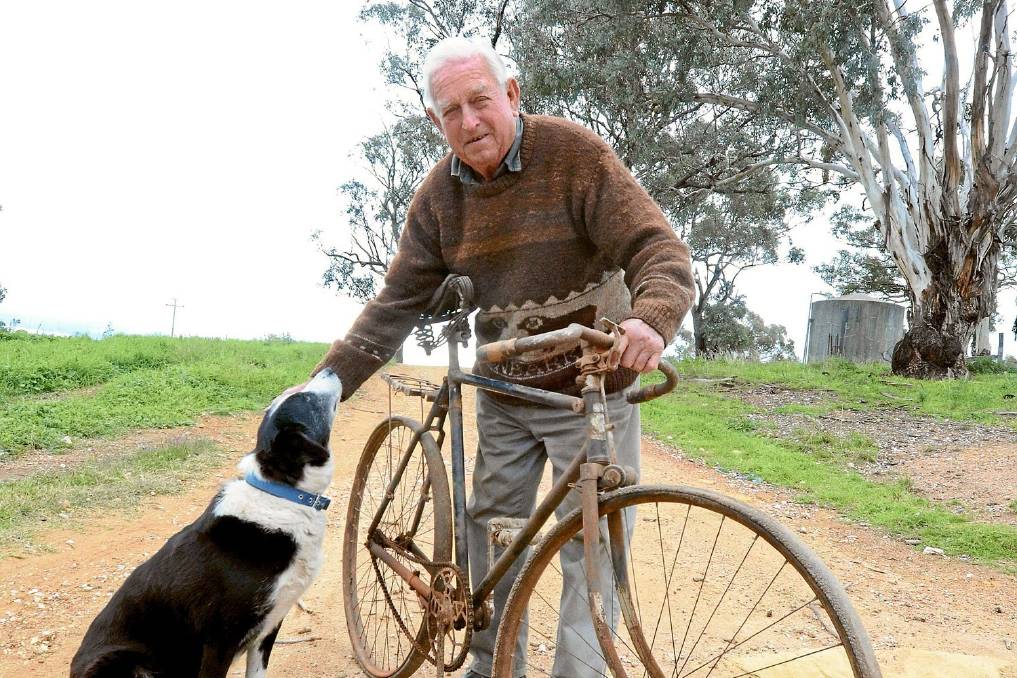 THE adventures of our forebears often intrigues and that is certainly the case for Stuart Town woolgrower, Laurie Pope.

THE adventures of our forebears often intrigues and that is certainly the case for Stuart Town woolgrower, Laurie Pope.

Laurie has long been fascintated by the stories surrounding the journeys made by his grandfather, Michael John Pope, or Mick to family and friends, by bike while he was shearing in western NSW and Queensland during the late 1800s.

The dust is well settled and much now covered by bitumen, but Laurie has always held the desire to retrace his grandfather’s bicycle tracks, so last February, accompanied by neighbour Cliff Hyde, he set out by vehicle to cover the 2077 kilometre round journey from the family property, “Weemala”, Stuart Town, to Eulo, Qld, but was interrupted by rain halfway through at Thurloo Downs Station, Wanaaring.

“We were told it would be best to head back east before the dirt roads became impassable and we could be stuck for a month or more,” Laurie said.

However, the mates called into several stations where Mick had worked as a blade shearer and were greeted enthusiastically by all.

“My grandfather was quite canny, so he would have made himself relatively comfortable on the ‘wallaby’ (long trips from one woolshed to the next), although comfortable for him back then and comfortable for us today would be two very different things,” Laurie said.

Laurie said Mick would shoe a horse before riding to Wellington from his farm, “Little Oakey”, 15 kilometres upstream from today’s Lake Burrendong, and when he returned the horse was unshod to save the shoes from wearing.

Laurie also still has a pair of his grandfather’s boots – the heels are full of nails, which he said saved wear on the leather.

Mick was born at “Nubrigyn”, Euchareena, in 1874 and left school at 12 to care for his mother, Mary (nee Cullow), after his father died.

When he was in his early 20s he decided to take his blade shearing skills out “north west”, so purchased a BSA bicycle and rode off, ending up out towards Bourke and then headed west and north for the big sheds of western NSW and Queensland between 1896 and 1898.

Laurie said bikes were a popular means of transport at the time as horses had to be fed and watered and were much “slower going”.

Family records reveal that Mick’s best effort on his bike during his ride home in 1898 was 181km with a full swag in one day, somewhere between Nyngan and “Little Oakey”.

He worked the sheds from Cunnamulla, Qld, as far south as Cobar.

After returning to the Oakey Creek district Mick married Mary Jane Fleming in 1906 at the age of 32 and built a stone homestead where the family lived and bred Merino sheep.

Laurie arranged the reminiscing trip so he could visit the stations where his grandfather had shorn from copies of shearing work certificates still held in family records.

The northernmost shed was “Dynevor Downs”, Eulo, Qld, where Mick worked for a time from August 4, 1897.

Some of the other sheds Mick worked at during 1896 were “Tindarry” and “Coronga Downs” between Wanaaring and Cobar, while in the Wanaaring district he also worked at Thurloo Downs from July 14 to September 3, 1898, and then “Berrawinnia Downs”.

Present owner of “Thurloo Downs”, Peter Hughes, said shearing numbers on the property in the late 1800s would have been as many as 60,000 sheep, “all blade shorn”.

Laurie said the distance from the front gate to the back boundary of “Thurloo Downs” was 128km in his grandfather’s day.

Peter said the station had been split into soldier settlement blocks in the 1900s, and the actual size of the “Thurloo Downs” block was now only 179 hectares.

Peter has increased his holdings “quite substantially” since buying the property in October 1983 and now runs about 20,000 Merinos.

The original blade shearing shed at “Thurloo Downs” is no more, but Laurie visited the site to find only thousands of old nails and many shearing cutter combs scattered about on the ground.