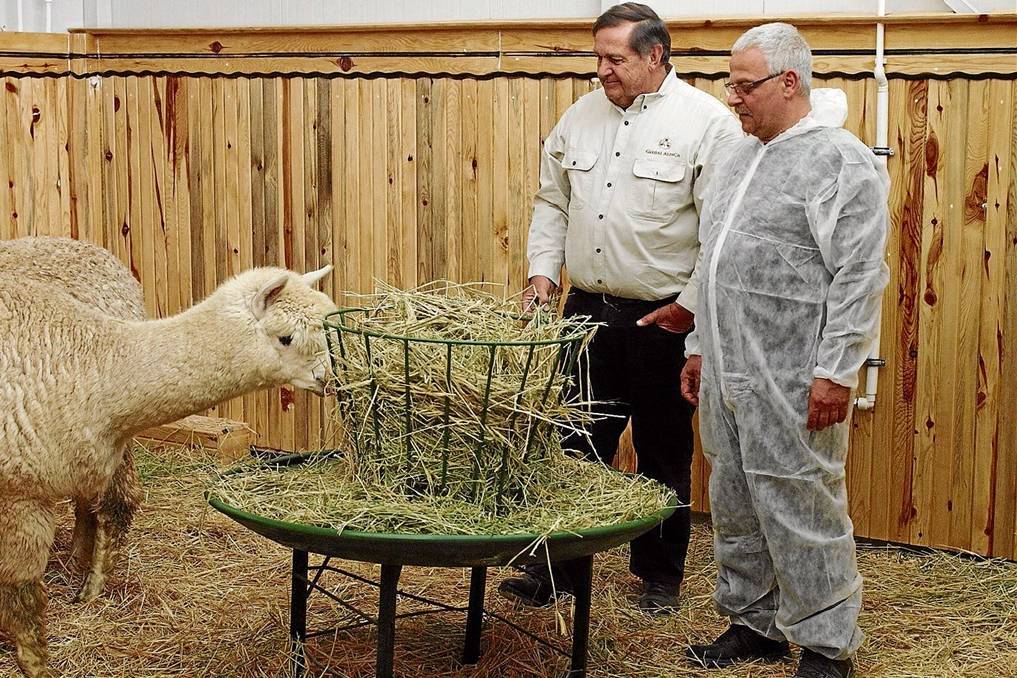 TURKEY has started growing a national alpaca herd – based on Australian animals and genetics.

TURKEY has started growing a national alpaca herd – based on Australian animals and genetics.

One of the largest textile producers in the world, Turkey, has begun a joint venture with South Coast alpaca breeder Ian Frith, Millpaca stud, Berry.

Mr Frith said the project started on the back of visits he had made to textile mills in Turkey and their interest in alpaca fibre he had taken with him.

“I talked to the government ministers involved in agriculture and commerce and we put together ideas and decided to do a joint venture as an experiment,” he said.

The first shipment of nine pregnant white Huacaya alpacas arrived in Turkey in March with a second shipment of 250 females to follow in about six months.

The Turkish government has put $100,000 behind the project in the way of a state-of-the-art facility to house the alpacas.

Mr Frith said it had also offered support in setting up “every element” of the venture.

He said for Turkey the venture was entirely commercial, and the pet and showing elements weren’t of interest there.

The alpacas were based at Selcuk University in Konya, Turkey, and would be studied by the veterinary section for six months to ensure they were adapting to the climate.

Mr Frith, along with a vet and stud master, would also return at least twice a year to assist with husbandry, shearing, birthing, nutrition and more.

Because of the need for more genetics Mr Frith said he would ask other breeders to work with him and provide stock to sell to Turkey.

“We can’t have just one blood stock supplying the animals,” he said.

“If anything it will increase the price of alpacas in Australian because of the demand,” he said.

“We have a huge (market) going forward... it’s showing the rest of the world that Australia does have the best quality and we are a force for the future to be recognised.”

He said it might also encourage smaller studs to expand their numbers to help feed the supply.

Mr Frith said it would be a five- to 15-year project and he planned to establish his own farm in Turkey to continue working on the development of its industry.

He aimed to have the farm set up before the second shipment of alpacas arrived.

The mothers would be for processing and the crias for improving the herd’s breeding.

Another aspect was to discuss the blending opportunities alpaca fleece offered.

He said alpaca was generally blended with Australian Merino wool, silk or cashmere in an 80 per cent alpaca, 20pc other fibre mix.

It could also be processed as 100pc alpaca fleece.

“They can experiment with their markets, as they have markets that we just can’t get to,” Mr Frith said.

Mr Frith hoped in two to three years about 20pc to 30pc of the Australian fleece would go to Turkey mills.

He said in the partnership could be worth million of dollars.

“It’s a huge win because we are not just exporting fleece, but also animals.

“It’s another country we’ve opened the door to and it’s a commercial industry which we will be involved in.”

Australian Alpaca Association president Michelle Malt said Turkey would open up another market and add further strength to what was still “a young industry”.

“Turkey has chosen Australian genetics over those of the UK, Europe, the US and New Zealand and that makes us very proud of what our industry has achieved and what is ahead as our international reputation continues to grow,” she said.

The project had also led to the opportunity to start a market in China, which would focus on the textile side of the business, as well as the pet market.

Mr Frith said Chinese delegates went to the alpaca world conference in New Zealand recently to talk to the industry about the market and its potential in their country.