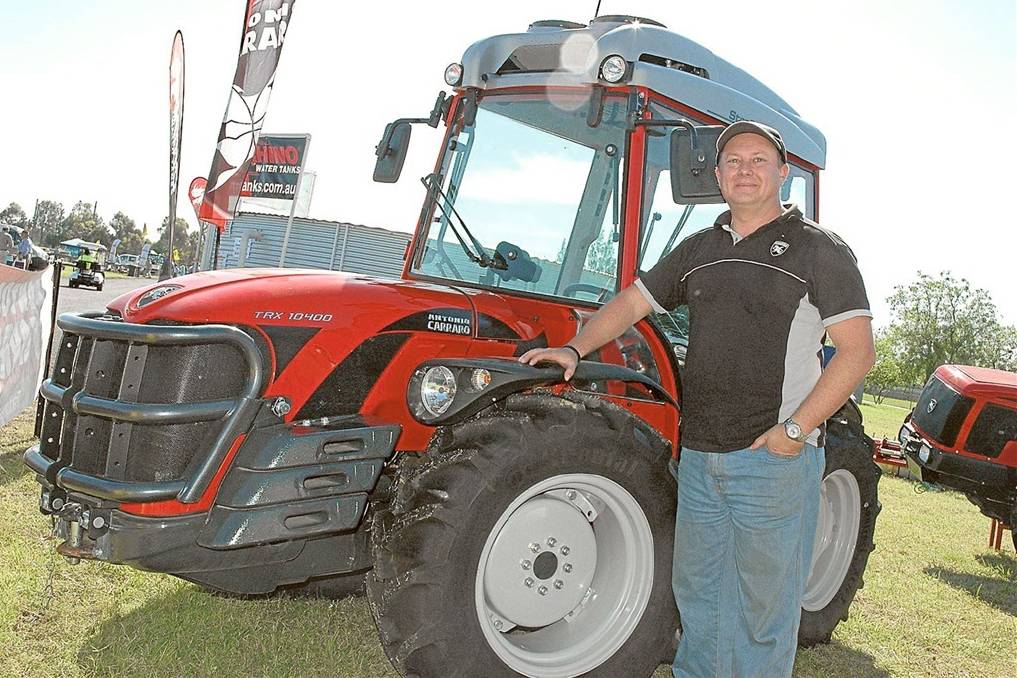 YOU need to consider your land, the enterprise run on it and what tasks are done daily when choosing the right tractor for your operation.

YOU need to consider your land, the enterprise run on it and what tasks are done daily when choosing the right tractor and the right set of implements for your operation.

But it’s not simply a matter of taking these factors into consideration. The weight of the tractor itself also comes into play along with the gearing and power, according to tractor experts.

“While everybody is itching to do the big jobs you have to look and think is the extra $3000 worth it or better spent on a contractor and then buying a smaller tractor for pottering around,” Mr Crakanthorp said.

“At the extreme end of the scale, people might buy a 80 to 100 horsepower (60 to 74.5 kilowatt) machine for 16 acres (6.5 hectares) because it can lift one tonne, but long-term they’ll do damage because they are not using the engine (to its abilities).

“Tractors have efficient cooling systems and if you are not working it right, it might struggle to get to the operating temperature, which is bad for the engine long term.”

Antonio Carraro sales and marketing manager Dale Ingle agreed those who had a lot of earthmoving work to do would be better off getting in a contractor.

“That kind of work will break machinery. Tractors aren’t designed to be earthmoving equipment, even if they can handle it for a while,” Mr Ingle said.

Mr Ingle said it was important to get the right size tractor because if it had more power than you needed the engine would be underused, and that could prevent the machine from running correctly.

However, it was also just as bad to over-run a tractor or push it to its limits.

Mr Crakanthorp said 21 to 22kW (28hp to 30hp) machines were a good starting point and it was worth investing in four-wheel drive so the tractor could work with implements such as loaders.

He said once you got into implements to fit that size tractor they could be carried on down the track, even if the tractor was upsized.

He said landholders needed at least 18.6kW (25hp) if they were going to run post hole diggers, slashers, grader blades and rippers.

For carrying about feed pallets or big hay bales then 37kW (50hp) was required.

If predominately using the mower to neatly finish and cut grass then buying a finishing mower should be considered as its cutting action meant it was more efficient and didn’t require as much power as a slasher.

“You have to be realistic about what you want to do with the tractor,” Mr Crakanthorp said.

“If you think there is scope to intensify your enterprise then if you buy the implements, you can get a larger tractor down the track and still use those implements.

“For example little Kubota implements can be used on a 55hp (41kW) tractor.”

For those with rough bush blocks, buying a loader for a small tractor would do the work, but something bigger would be better suited if you valued time highly.

“A 25hp (18.6kW) tractor on the NSW North Coast with their knee-high kikuyu isn’t going to do the job,” Mr Crakanthorp said.

“A small tractor can do it but in such a low gear that you can get off and have a sandwich and get back on.”

When looking at adding a loader to a tractor the weight the loader would carry had to be considered as a counterweight would be needed.

Mr Crakanthorp said if farmers were looking to lift more than 500 kilograms then they needed a tractor which weighed at least three tonne.

“While the horsepower of tractors keeps getting bigger, with tractors traction is as important as power, as is the gearing to get the power to the ground,” he said.

He said four-wheel drive was one of the most important factors when considering getting a loader.

“If they buy a tractor that is too light to handle these (loads) then the stability becomes an issue,” Mr Surman said.

“However, you don’t want people going overboard and buying something too big.”

He said when considering which implements to use on a tractor you had to consider the weight of the tractor as it didn’t take much to lift the front of the tractor off the ground.

“It doesn’t take much of a slope for it to become unsafe.

Mr Surman said in a general “lifestyle block” sense people should look at engine capacity, hydraulic capacity, and the size of the hills on their block.

He also advised customers to look at the warranty and service offered.

Mr Ingle agreed the size and nature of a property determined the kind of tractor that was needed.

“If it’s a hilly property or you have row crops or you have to get into sheds, then you probably want a compact machine,” Mr Ingle said.

He said those who just wanted the tractor for pastures didn’t need a lot of power, but still enough to do the job quickly.

“If you have just grass or pasture then you probably just need a slasher or mulcher and that covers the implement needs for most people,” he said.