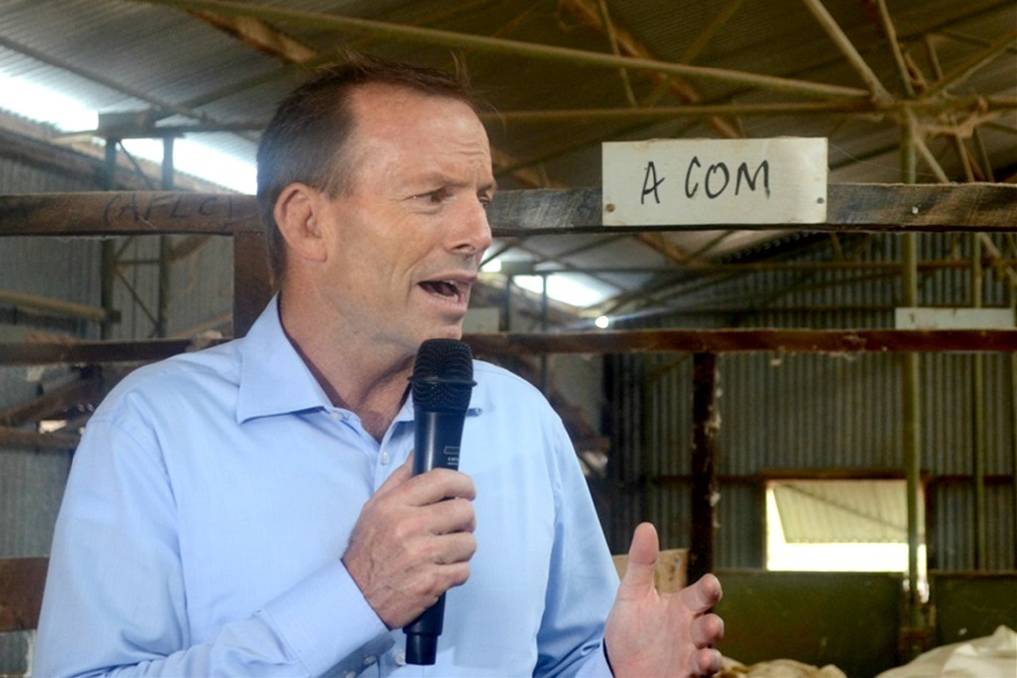 Tony Abbot at the "Jandra" woolshed, north of Bourke, on Sunday.

HELP is on the way, and it’s coming soon. That was the clear message from PM Tony Abbot during his drought tour on the weekend.

HELP is on the way for drought-affected producers, and it’s coming soon.

That was the clear message from Prime Minister Tony Abbot on his drought tour to western NSW and Queensland with Agriculture Minister Barnaby Joyce on Sunday.

It would be hard to know if locals were more impressed with the PM’s pledge of support, or the 30 millimetres of rain he brought with him when he touched down in Bourke, NSW, this morning.

Mr Abbot said the government will “in coming days” announce a range of social and economic funding measures to assist farmers.

He said severe droughts are a “a natural disaster.”

“Drought for farmers is what flood or fire is for people in other parts of the economy.”

However, that dust soon turned to mud as the best shower of rain for months fell between 9am and 3pm in patches across the district.

Although, as the PM acknowledged himself, one shower isn’t enough to break two long years of drought.

Local farmers, politicians and media took shelter from the showers in “Jandra’s” woolshed, where the PM had to raise his voice above the din of rain lashing the tin roof.

“A good farmer factors a certain amount of drought into their ordinary business plan.

“But occasionally you get hit by a drought that is not just routine but happens once every 20 – 50 years, the same way you get a 20 year flood and it really knocks people around."

Mr Abbot said he doesn’t want to see country Australia become a “museum piece”. He wants the "agricultural economy to be a “strong viable part of Australia’s future.

"Our future is not just in coal and iron ore.

“As Asia becomes more middle class, there will be more of a demand for sophisticated foods and Australia is extremely well placed to supply that need.

“If we are going to do that, we need a strong and dynamic agricultural economy. That means an economy that is able to ride out the drought.

“We can’t prop up failings businesses, but what we can do is ensure that good businesses that are hit by natural disaster get the sort of support they need.”

The clouds cleared as the PM, Mr Joyce and the flanking media boarded aircraft bound for Broken Hill.

As the caravan rolled out of town, local farmers were left hoping as always for more rain, but now with more than a glimmer of hope that help is coming from Canberra.