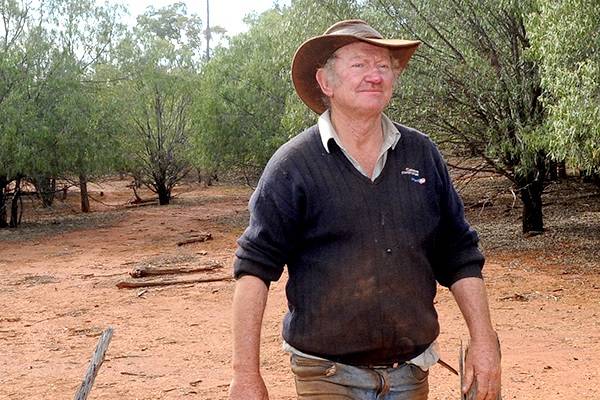 GEOFF Martin has a property vegetation plan (PVP) in place on his Hermidale farm, but says the restrictions it imposes don't allow him to develop it to any economy of scale.

GEOFF Martin has a property vegetation plan (PVP) in place on his Hermidale farm, but says the restrictions it imposes don't allow him to develop it to any economy of scale.

Mr Martin and his wife Dianne grow Merino wool, beef, goats and crops on their 4500-hectare holding "Rainbow Ridge", all of which is covered by the PVP which was approved by the Central West Catchment Management Authority (CMA) in 2007.

Under the PVP, he can clear the ends of paddocks; taking out weeds like turpentine and Wilga, but only Cypress Pine and Bimblebox up to 25 centimetres thick.

Mr Martin (pictured) said the size restrictions on the Cypress Pine and Bimblebox, and the fact he was not allowed to touch Mallee or Red Box, made it pointless to develop the PVP.

He said on his property Red Box was considered an endangered ecological community, yet if he travelled 15 kilometres west of "Rainbow Ridge" to the Western Division, it was classified as invasive native scrub.

Mr Martin said further restrictions - like the fact the PVP only allowed him to crop the cleared country three times in 15 years - made it all the more uneconomical.

"There is no economic advantage; it doesn't turn it into cultivation and it doesn't improve it much, because you've still got too many large trees," he said.

"You can't dodge in and out of the big trees to get a little tree and expect to grow grass underneath, it doesn't happen.

"If I was clearing a thousand-acre paddock, I would much rather leave a corner, or leave a strip 200 metres wide around the boundary, or criss-cross it in a windowpane pattern and the rest of it I'll take out every tree so I can actually use it for cultivation.

"I'd like to have more flexibility in the PVP... if it needed five cultivations in 10 years, you would need the flexibility to do it.

"And if you get the opportunity to crop, you need the flexibility to be able to do it when the conditions are right, not when the CMA determines you can."

Mr Martin was forced to sell off a 1600ha portion of his block last year, "because the rules as they are didn't allow me to develop it with any economy".

He said his undeveloped country was worth less than half that of cultivated country just to the north of "Rainbow Ridge".