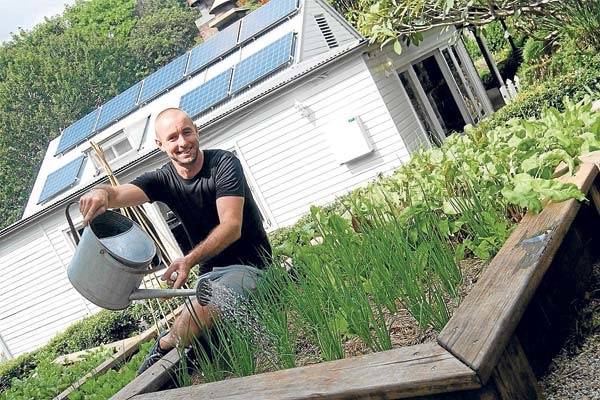 Going solar was the logical step for Harvest Cafe, Newrybar, which has already established itself as a sustainability leader in its industry.

On the North Coast an energy forum has been organised for May with the aim of helping the region “grow its own” sustainable energy.

Convener Mark Byrne said the region boasted one of the highest uptakes of rooftop solar systems in Australia but there was much more scope for this mature technology, especially on public and commercial buildings.

Already, a community group in Byron Bay set up to increase commercial solar energy use has garnered private investment to finance more than $100,000 worth of panels, mostly on food businesses.

“Businesses are finding by positioning themselves as committed to sustainability and reducing their environmental impact they are providing a marketing angle to attract new customers,” he said.

Meanwhile, not-for-profit group Farming the Sun, based on the Northern Tablelands, has been successful in securing State government funding to help set up at least five community-owned solar farms.

Eight to 10 sites in the Northern Rivers, along with sites around Armidale, Tamworth and Inverell are now being investigated, with farms ranging upwards in size from 80 kilowatts.

All up, the project aims to install one megawatt of solar farms across North Eastern NSW.

Farming the Sun’s Adam Blakester said the concept allowed individuals and organisations to pool micro-investments to build their own solar farm, with a “better than bank” investment return.

At the same time, it enabled a shift to sustainability through more affordable solar power for a large, local electricity user, he said.

This “host” – likely a council facility, aged care home, retail centre or manufacturing plant – needed to be able to utilise all of the energy produced so it would have a power bill in excess of $25,000 per annum.

The project allows hosts to limit their exposure to potential increases in electricity costs and increase their profile as a sustainable, community-minded operation, Mr Blakester said.

Mr Byrne said these initiatives were just the tip of the iceberg.

“The North Coast is suitable for deployment of small and mid-scale solar farms as well as commercial and residential rooftop installations.

“We have abundant natural and human resources to create a sustainable energy system, which will strengthen employment and the local economy, help tackle climate change and empower our community.”

The North Coast Energy Forum, to be held in Lismore on May 31, will have a range of energy industry experts, regional community leaders and government representatives speaking.