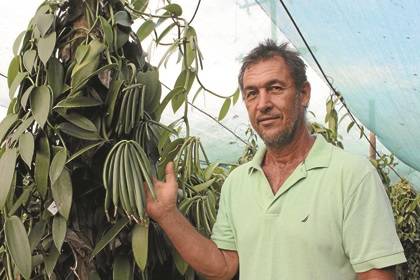 TROPICAL NORTH Queensland is more commonly known for producing the country’s premium bananas, papaya and avocados, to name a few, but it is also home to Australia’s first commercial vanilla bean plantation.

TROPICAL NORTH Queensland is more commonly known for producing the country’s premium bananas, papaya and avocados, to name a few, but it is also home to Australia’s first commercial vanilla bean plantation.

Port Douglas farmers Russell and Mary Spanton started Vanilla Australia more than 10 years ago by accident, when their landlord, a Second World War veteran who was part of the first trial of cocoa in Australia, asked them to “grow something”.

Mr Spanton said they called the CSIRO and asked for information on growing vanilla.

“We called the CSIRO and they said nobody grew it in Australia and that they didn’t know anything about it,” he said.

“So we built a greenhouse on a whim.”

The Spantons settled on vanilla and started with 55 vanilla orchid cuttings.

Those cuttings have grown to 500 plants and further expansion is currently underway.

A stonemason by trade, Mr Spanton said the vanillary took many years to establish.

Vanilla Australia products have now been on shelves for more than three years.

Mr Spanton said there was a lot of misinformation on the Internet about growing vanilla, though through experimentation and organic growing practices,Mr and Mrs Spanton produce vanilla beans with some of the highest vanillin content of anywhere in the world.

“Our vanilla has four times the vanilla content of most vanilla all across the world.

“And we successfully make the first Australian-made and manufactured vanilla essence in Australia.

“Our essence is also one of the very few manufactured without chemical extraction.”

Mr Spanton said going down the non-traditional route of growing the vanilla in a greenhouse, and on weed mats out of the direct sunlight, had also helped their product thrive.

“We feed our orchids organic matter and use insects instead of pesticides.

“We grow them altogether and I think intensifying it into a smaller space as opposed to traditional methods gives us a good product,” he said.

The Spantons grow the native Mexican variety Vanilla planifolia on their one acre property – the most common species of harvested vanilla worldwide.

The vanilla bean is one of the most labour intensive plants to grow, as flowers open for only one morning in spring and are hand-pollinated.

The beans are then individually picked at about eight to nine months, with a curing process that can take 18 months.

“The flowers open in the morning and close before lunch and will never open again,” Mr Spanton said.

“Once they are pollinated the stem of the plant grows rapidly.”

The vanilla is then cured, and permeates within itself.

Remarkably the vanilla bean is the only edible part of any orchid.

Vanilla Australia now produces about 100 kilograms of cured beans and half a tonne of green vanilla pods each year, primarily selling to the Australian market.

“We aren’t very big and prefer to get our market in Australia first,” Mr Spanton said.

“We send a very small amount around the world to Germany, France, Estonia, New Zealand, Denmark and the US.”

Vanilla Australia made its first sale more than three years ago at the Port Douglas markets and now sells to Australian food retailers, chefs and home cooks.

Mr Spanton is looking at a March/April harvest in 2012.

* This article appeared in Farming Small Areas March 2012 edition, available in this week's The Land and Stock and Land.