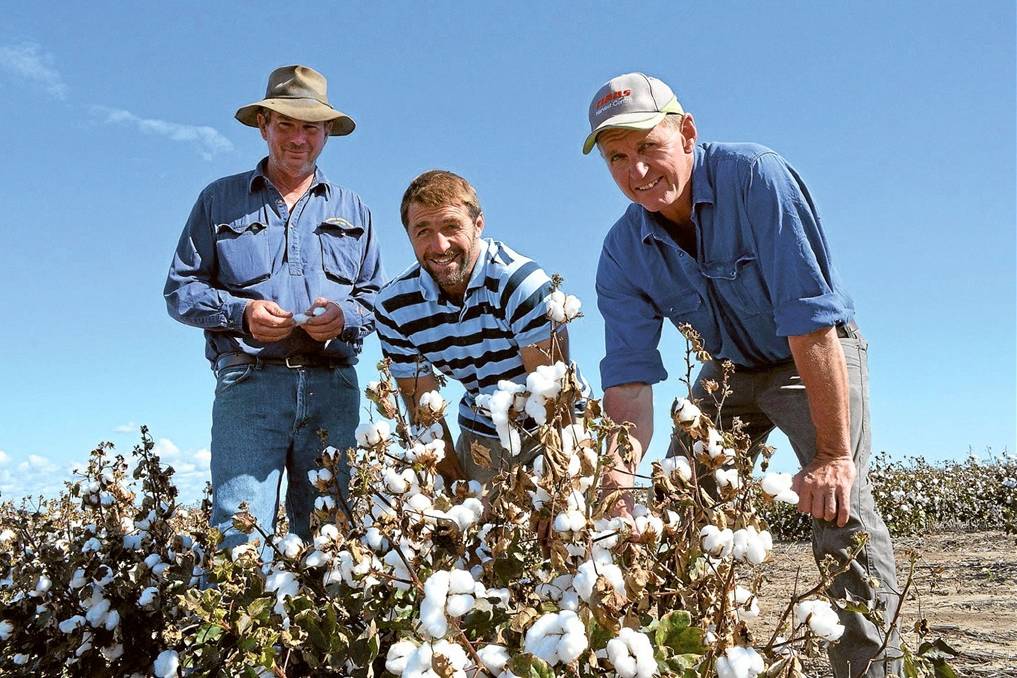 COTTON harvest is all but over in the south and growers in the north of the State are just getting started on picking their dryland crops.

COTTON harvest is all but over in the south and growers in the north of the State are just getting started on picking their dryland crops.

Widespread rain had drawn out the cotton pick and fingers are now crossed that downgrades will be minimal.

Auscott Namoi Valley grower services manager PJ Gileppa said the Narrabri gin had received about 80 per cent of cotton to be ginned this season with the remaining 20pc still to be moved off farm.

“Ginning should be finalised by the end of July which will be good for all parties, growers and merchants,” Mr Gileppa said.

Cotton in the north of the State had some colour issues with grade, he said.

“Rainfall events towards the end of the season before picking occurred caused some crops to be classed as strict low middling,” he said.

“Later crops were fortunate enough to escape with penalties.

“Yield has been acceptable, on the back of some massive yields the season before last, this season has held up quite well, despite all of its issues with a cold start, extremely hot summer, and water availability.”

Irrigated cotton harvest in the Valley is 99 per cent wrapped up with only occasional fields still being harvested.

In the south, Gavin Dal Broi, “Warra West”, Warrawidgee, west of Griffith, is harvesting the last of his irrigated cotton.

Mr Dal Broi, who is a past Lachlan Murrumbidgee Cotton Growers Association president, had a total of 500 hectares to pick this season and had only 20pc left to harvest.

This year he planted Sicot 74 BRF and Sicot 71 BRF varieties.

He delivered to the Hillston gin this season.

“I haven’t had much ginned just yet, but our average will be around the nine bales a hectare,” Mr Dal Broi said.

“Most farmers would be averaging over $500 a bale this season which is the magic number.

“Hopefully we don’t get any downgrades through ginning, of discolouration or low micronaire.”

Mr Dal Broi said it was a waiting game when it came to downgrades.

“We won’t know until it’s all ginned,” he said.

“Discolouration’s not a really bad penalty when it comes to pricing, it might be five or $10 a bale.

“Low micronaire can vary completely to too much fertiliser, not enough fertiliser, too much water; sometimes you just don’t know.

“You do everything right and suddenly it comes in low micronaire.

“It’s just one of those things.”

A dry spring led to a late plant for the O’Neills who planted on the back of a storm at the end of November.

“We had rain late in March and the crop has regrown from there,” Mr O’Neill said.

The 600 hectares of cotton to pick is half Sicot 74 BRF and half Sicot 71 BRF and will be delivered to the local Auscott gin.

The O’Neills have been growing cotton since 1999 and this year expect average yields.

“We had a varied result last year; we had some reasonable and some poor cotton so this crop will probably be on par with it,” Mr O’Neill said.

Mr O’Neill is pictured far right with Narrabri growers Bruce Kirkby, “Koiwon”, and Ian Gourley, “Blue Hills”, checking the progress of a local crop of cotton about a month ago.