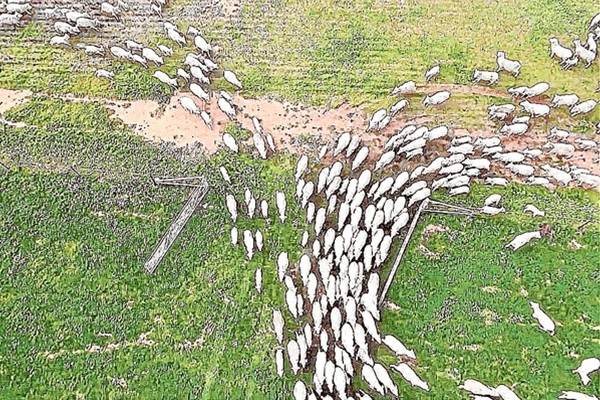 A bird’s-eye view of a sheep flock in motion.

ARMATREE graziers Hugh and Sally Beveridge thought they knew their flock upside down and inside out – until they saw their sheep from a bird’s-eye view.

ARMATREE graziers Hugh and Sally Beveridge thought they knew their flock upside down and inside out – until they saw their sheep from a bird’s-eye view.

Their flock stars in Australian Wool Innovation (AWI) footage which will be used to promote the natural conditions in which Australian wool is grown.

The footage marks an unlikely intertwining of ideas born from AWI’s 2012 promotion Fibre of our Nation and from Animal Liberation’s push to use surveillance drones to spy on farmers (“Drones unethical”, The Land, April 4, 2013).

The project is called Wool From New Heights and uses the remote control multicopter and filming services of Sydney-based Copter Cam.

Copter Cam part owner and NSW manager Glen McGarry, Sydney, said the company’s main area of work was in sport, with clients including Fox Sports, which uses the “Foxcopter” to provide high definition broadcast of events such as Big Bash cricket.

Mr McGarry said the machine used at the Beveridges’ property was a Copter Cam 8 – also called a multicopter or optocopter due to it having eight rotors.

It could carry just less than six kilograms, including the machine itself, the batteries and the camera.

It could remain in flight for a total of 10 minutes with this load, he said.

“The aircraft is designed to automatically correct itself, and is designed to handle a reasonable gust of wind,” he said, although the filming at the Beveridges’ farm “Bullagreen” was all done manually.

“Just to see the way (the sheep) moved from the sky was really quite interesting (as was) the patterns that they make.”

Mr McGarry said he was impressed with the “way the sheep can pretty much run free and keep themselves very happy and healthy”.

The video produced will be used as stock footage, which means it will be available to use in any campaign, including as rolling footage at trade shows.

“What I wanted to show was the expanse of wool being grown in a free range environment, so it shows the animals that are free to roam large expanses of the country, it shows how farmers care for their animals... it’s just another view of normal farm life,” said AWI communications manager Marius Cuming.

“It’s a unique view of agriculture and we feel it’s the first time agriculture’s been filmed in this way.”

While the copter technology was in the early stages of adoption, Mr Cuming said it also had potential for jobs such as checking water supplies and mobs of sheep.

He said the Beveridges’ sheep had established lambs at foot and were comfortable with the Copter Cam after a few fly overs.

However, he said he wouldn’t fly the copter over lambing ewes, due to risk of causing disruption.

“You can get a fixed wing drone and program in a GPS area and it can check things... that’s the bit that’s got the AWI on-farm team quite excited too, because I know there are a lot of farmers out there that are keen to use this sort of technology.”

The Beveridges came to the attention of AWI after a video they had made for the Fibre of our Nation project last year.

“I hope the rest of the world can see that Australian wool really is the ‘fibre of our nation’,” Mr Beveridge said in the AWI video, which in the five days since its release has had almost 2000 views.

At a cost of $6000 the two-days of filming came in at a fraction of the cost, compared with the equivalent footage if done with a helicopter, and with less disturbance to the sheep.

“I think it shows the real side of wool growing, that is a farmer looking after the best interests of his animals – a modern shepherd at work,” Mr Cuming said.

“Agriculture’s been distorted by activist groups with an agenda and this shows the farmer’s side of the story.