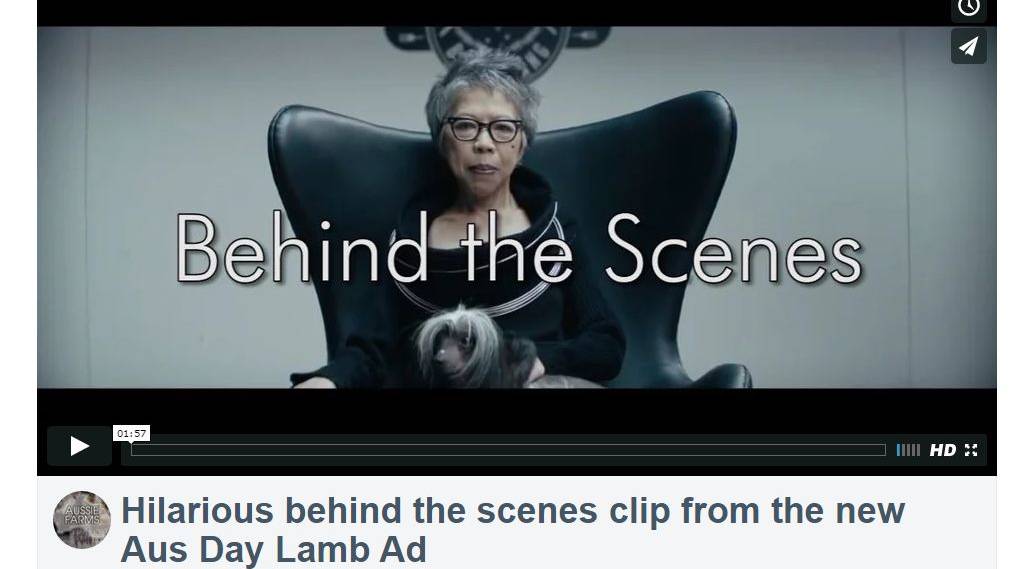 MEAT and Livestock Australia has threatened to sue an animal rights organisation if it does not take down a graphic parody video that splices footage from the ‘Operation Boomerang’ lamb ad with scenes from an abattoir.

Not-for-profit Aussie Farms posted the video ‘Hilarious behind the scenes clip from the new Aus Day Lamb Ad’ on its website and social media this week.

It uses a short take of MLA ad star Lee Lin Chin before launching into a series of graphic slaughterhouse scenes.

“Our video contains 7 seconds of the original ad, followed by recent footage from a Victorian lamb slaughterhouse, intended to show the Australian public what the industry never will - the reality behind lamb consumption.”

The parody video has been viewed more than 14,300 times.

But Aussie Farms said they had since received an express-posted letter from MLA claiming copyright infringement and threatening legal action if the video is not taken offline.

“As the video falls squarely within the definition of Fair Use, we have instead chosen to launch an urgent fundraising campaign to boost the video's reach in the lead-up to Australia Day,” the Aussie Farms website said.

Media journal Mumbrella spoke with Aussie Farms founder Chris Delforce, who said said the footage was taken at a Victorian abattoir in mid 2014.

“I think the demand is about intimidating and bullying and they are expecting me to fold, but I’m not going to.”

Mumbrella said MLA declined to comment on the demand that Aussie Farms take down the video.

The original MLA ad – which has been viewed more than 1.1 million times – has attracted hundreds of complaints over allegations it depicts violence toward vegans.

The most controversial scene shows fictional soldiers breaking into a vegan’s apartment and using a flamethrower to burn a bowl of kale.