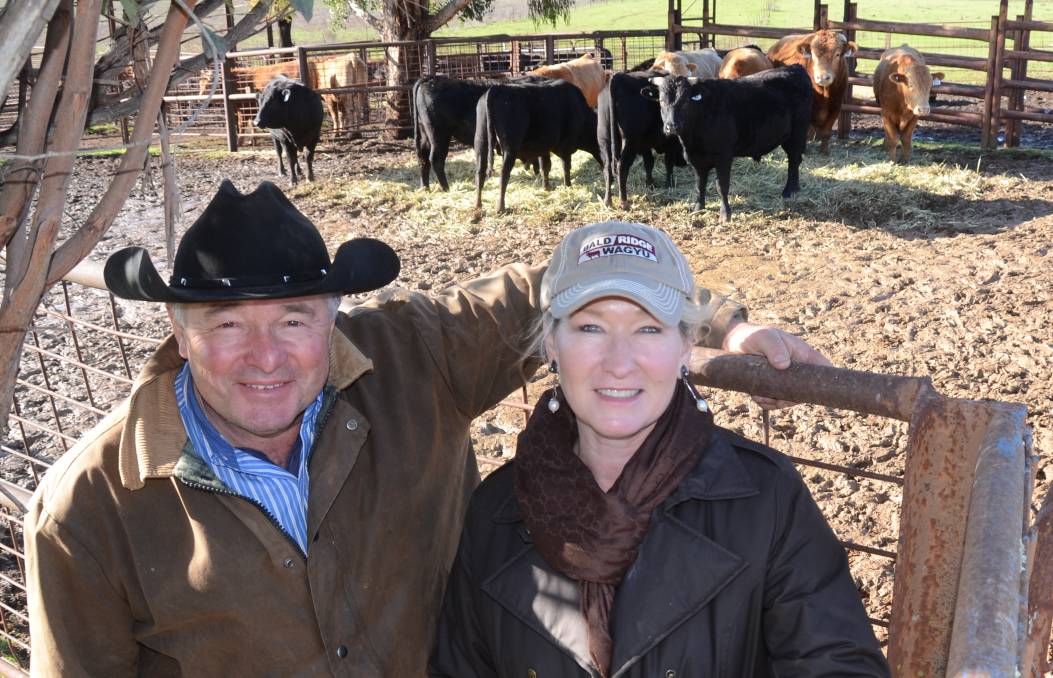 Bald Ridge Wagyu stud principals Rick and Dawne Hunter were ecstatic at the success of their inaugural sale at "Kaludabah", Mudgee, last Thursday. Buyers came from Queensland, Bourke, north to Bingara and south of Orange.

Five bulls topped the sale at $10,000 each while another nine sold at $9000 a head from the offering of 64 aged from 21 to 46 months with the 52 effecting an 81 per cent auction clearance to buyers as far afield as Queensland, Bourke, Bingara and Orange.

Buyers of three bulls, two at $10,000, averaging $9667, Mark and Jane Holman, “Dargo”, Guyong, have been breeding Wagyu cattle for 10 years on their 930-hectare property, and have bought bulls from Bald Ridge for eight years.

“We breed first-cross Wagyus and sell them direct to feedlots,” Mr Holman said.

“High marbling is the most important criteria in our sire selection.”

The Holmans buy “big” Angus females to join with the Waygu sires in a production program similar to first-cross sheep production.

“We buy our replacements each year from a local producer and sell every calf we produce,” Mr Holman said.

Steers and heifers are grown out to 400 kilograms live at about 14 months, depending on the season.

Peter Portelli, “Beaudesert” and “Kanimbla” between Mudgee and Gulgong and “Narrawa”, Cobbora, near Dunedoo, bought six bulls to $8000 and $7000 average.

He is crossing Wagyus with Angus females in a first-cross breeding program for feedlots.

The largest multi-lot buyer was Greg Gibbons, Dalby, Queensland who purchased nine bulls for Queensland and NSW clients while paying to $8000 three times and with an average of $6500.

Sponsored by
Weighing 935kg, Claire Murphy's scrap metal sculpture is taking Queensland's campdraft community by storm.
Test
Recent rainfall has created strong supply prospects - not only for the summer crop currently in the ground, but also this year's winter crop.
Test
GrainCorp recorded 140,510 tonnes delivered in its final report of the season.
Test
The new methods cover blue carbon, plantation forestry, abatement from industrial and commercial processes, and biomethane.
Test
The event was slated to be held in Tamworth this weekend.
Test
"We've given them real, credible, tangible information and they've done nothing about it."
Test
Farmers impacted by the November floods can apply for up to $50,000 to salvage damaged crops and stock, rebuild fences and replace machinery.
Test
Small town spirit and a sensational racetrack made the 2022 Glen Innes Cup day a success.
Test