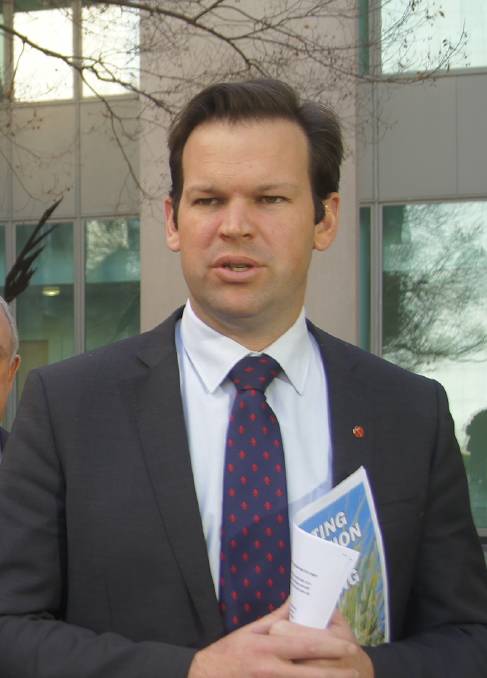 THE Animal Justice Party says it has done a deal with federal Labor to expand plant-based food production in a political move that critics say shows support for ultimately ending livestock production.

A statement on the AJP website says the two parties recently held discussions and had agreed to work together to increase the production of plant-based food in Australia.

The AJP is running 54 candidates throughout the nation at the weekend’s federal election including 12 in the Senate and 42 lower house seats in NSW, SA and Victoria.

The animal rights party already has a NSW Upper House member Mark Pearson who has been a long term campaigner to ban live animal exports and “factory farming” while leading other anti-livestock farming agendas.

In a statement, AJP President Professor Steve Garlick said “following discussion with us, the ALP in government has agreed to develop and expand initiatives which can maximise plant-based food production and expand these agricultural markets”.

Professor Garlick said due to discussions with the AJP, the Shadow Environment Minister Mark Butler - who is also ALP national president - had stated a Labor government would “direct funding to support this approach”.

“This is an alternative to an industry which presently involves cruel and unnecessary trafficking in live farm animals to far away countries inflicting immense suffering on Australian bred animals during the journey and frequently at the destination country.”

“This will be great for jobs, human health and ameliorating climate change”, the AJP leader said.

Professor Garlick said the proposal by the AJP and the ALP to support investment in plant-based food was about jobs and growth “in an ethical non-lethal industry”.

“Our belief is that in the future, investment in the live trade industry will cease in favour of investment in a diverse, organic, non-lethal agriculture industry where the returns, the jobs and other benefits for us all will be greater,” he said.

“A great deal of rhetoric by parties such as the Greens and some animal groups about banning the live trade in farm animals has achieved nothing for the animals for three decades.

“They have had no real plan.

“This is not good enough.

“Now, thanks to the AJP, there is a plan to end this awful live trade industry which has become worse over the past decade.”

But the Cattle Council of Australia warned against the political danger of trying to align with a movement that would try and prevent Australians enjoying a steak cooked on the BBQ.

CCA CEO Jed Matz said Australians loved beef and were among the highest consumers of the product in the world, which was produced ethically and sustainably.

“I would be very surprised if any major political party would try to stop Australian’s from enjoying a great steak from the BBQ,” he said.

“After all what is more Aussie than that?

“In Australia we produce our beef in an ethical and sustainable manner to the highest of world standards.

“Aussie people understand the importance of beef as part of a healthy, balanced diet.

“We recommend Australians enjoy the recommended 455g/week of cooked red meat, in 100 to 200g portion sizes, 3-4 times a week as part of a healthy diet.

“This is consistent with the Australian Dietary Guidelines which ensure both enough iron and zinc required for health and wellbeing in addition to balanced nutrition required for reducing risk of chronic disease such as cancer.”

Australian Livestock Exporters’ Council CEO Alison Penfold also cautioned against the move saying meat and vegetables coexisted and would continue to do so.

She said red meat was an important part of diets and Australia played an important role in supplying and supporting increased consumer demands for enriching diets with different red meat products around the world.

Queensland LNP Senator and Northern Australia Minister Matthew Canavan slammed the ALP working with the AJP in support of an animal rights political movement that sought to put an end to livestock farming.

“It’s unbelievable that the party which was founded by shearers, the ALP, is now teaming up with a political party that ultimately wants to put shearers and graziers out of a job,” he said.

“It just shows how far the ALP has come from their working class base.”

The AJP’s farming policy statement says the party will “advocate for incomplete reform when the immediate suffering of animals is involved (but) will always recognise that such reforms are not enough in isolation and must occur in tandem with a long-term, total transition to plant-based agriculture”.

The AJP also says it supports the withdrawal of government financial support for animal product industries except for research into welfare improvements.

The AJP also wants to introduce a tax on animal products “commensurate with their adverse environmental and health impacts” and backs the “rapid phase out” of live exports.

On the recent incident involving cruelty allegations in the Vietnam live export market, Professor Garlick said, “There is no moral or economic argument in support of this cruel trade”.

He said the AJP policy was to establish an Independent Office of Animal Welfare which the ALP had supported, based on a letter to him last week.

“This live export industry needs to be stopped and funds allocated to alternative industries in Australia like increased plant based industries that employ Australian workers,” he said.

“Does Labor see a massive role for agriculture in the future of this country? Yes,” he said.

“Do we support trade agreements which provide greater access for Australian agriculture into China and elsewhere? Yes.

“Do we support the ongoing development of the live export industry? Yes.”