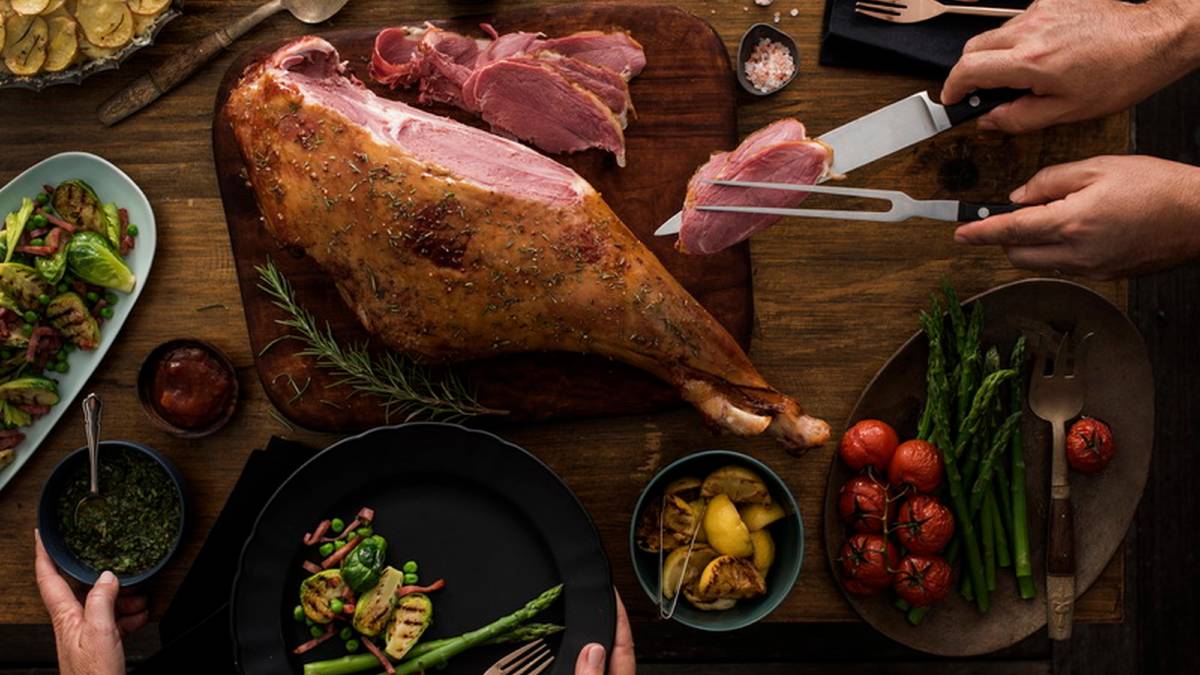 The idea for LamHam came from Maree's memory of 'poor man's ham', or corned legs of mutton. Picture: contributed.

It was a flourishing organic Dorper lamb grazing operation, combined with an online paddock to plate business that led Andrew and Maree King to a new lamb food marketing venture that is turning heads around Australia.

It was a flourishing organic Dorper lamb grazing operation, combined with an online paddock to plate business that led Andrew and Maree King to a new lamb food marketing venture that is turning heads around Australia.

The couple were in Dubai in 2014, at the world’s largest food trade show, one of the prizes offered as MLA’s 2013 Queensland Sheepmeat Producer of the Year, when Maree had a “lightbulb” moment.

“We went over there with opportunities for our fresh Dorper lamb in mind but it all changed while we were eating at our hotel, where there were so many smoked offerings - turkey and fish and the like - standing in for bacon and pork.

“We had introduced a cured and smoked leg of lamb to our online business just as a Christmas novelty, and I thought it tasted a lot better than what we were eating in Dubai.

“A lightbulb went off, and we came home and started developing that more.”

Home at the time was Silverwood and Westfield at Longreach in Queensland’s central west.

Andrew’s family had been growing Merinos for four generations but in 2000 he and Maree turned to Dorpers to turbocharge their business. Longreach leaders: From their origins with their Dohne flock at Longreach, Andrew and Maree King are now turning heads around Australia as they expand into a new lamb food marketing venture. Picture: Sally Cripps.

After undertaking embryo transfers with bloodlines from Western Australia, they had their first purebred lambs on the ground at Silverwood, which they crossed with Merinos until they got back to the purebred stage.

After making it through the very dry years at the start of the millennium, drought hit again in 2013, forcing stock reductions and finally a total destocking of all their country.

“The Dorpers did so well - we never fed them,” Maree said.

After assessing the cost of restocking once it rained, the Kings decided to put all their energies into establishing their LamHam business, selling their Longreach country and moving to the Gold Coast to be closer to potential customer bases.

After a great reception online for the niche product - over 100 were sold one Christmas - and feedback of intrigue from the general public at food trade shows, they experimented with the taste with Lagos Smallgoods in Melbourne and finally launched their halal-accredited product at the September 2015 Fine Food Australia trade show in Sydney.

“It went so well - we were overwhelmed,” Maree said. “The food industry is always looking for the next new thing, and no-one had ever heard of this, except oldies who used Kwikurit to corn legs of mutton and call it ‘poor man’s ham.”

The Silverwood Black Label LamHam is cured in a brine solution for 48 hours and then naturally hot smoked overnight, using beechwood chips and fresh rosemary, before being chilled for another 24 hours.

Both bone-in and boneless legs are sourced from the supplier, Mulwarra Exports.

Its promoter, Maree King described it as having a soft, buttery texture that wasn’t as rubbery as pork, saying that Dorpers lent themselves especially well to the process. LamHam can be ordered bone-in or boneless and is hot smoked with beechwood and rosemary. Picture: contributed.

“Their muscling and texture was really suitable. I could always tell when we used them,” she said.

The label was a national finalist in the 2015 Delicious Produce Awards and is attracting a lot of interest from airlines.

As Maree explained, its appeal lies in being something they can serve to a wide clientele without having to have a separate offering.

At their most recent trade show in Sydney, MLA’s head chef Sam Burke took their product up on stage and declared he wanted it on the LambEx menu at Albury in August.

While there is still a lot to be done to change from an online pay-as-you-go model to a distribution model, including getting export accreditation, the Kings are especially pleased to still be in the red meat industry even though they’ve left the west.

“We’ve not farming anymore but it’s very important to us,” Maree said. “We’ll always remember that Dorpers brought us to this point.

“They were so economical to run and they delivered a product that was really well accepted.”