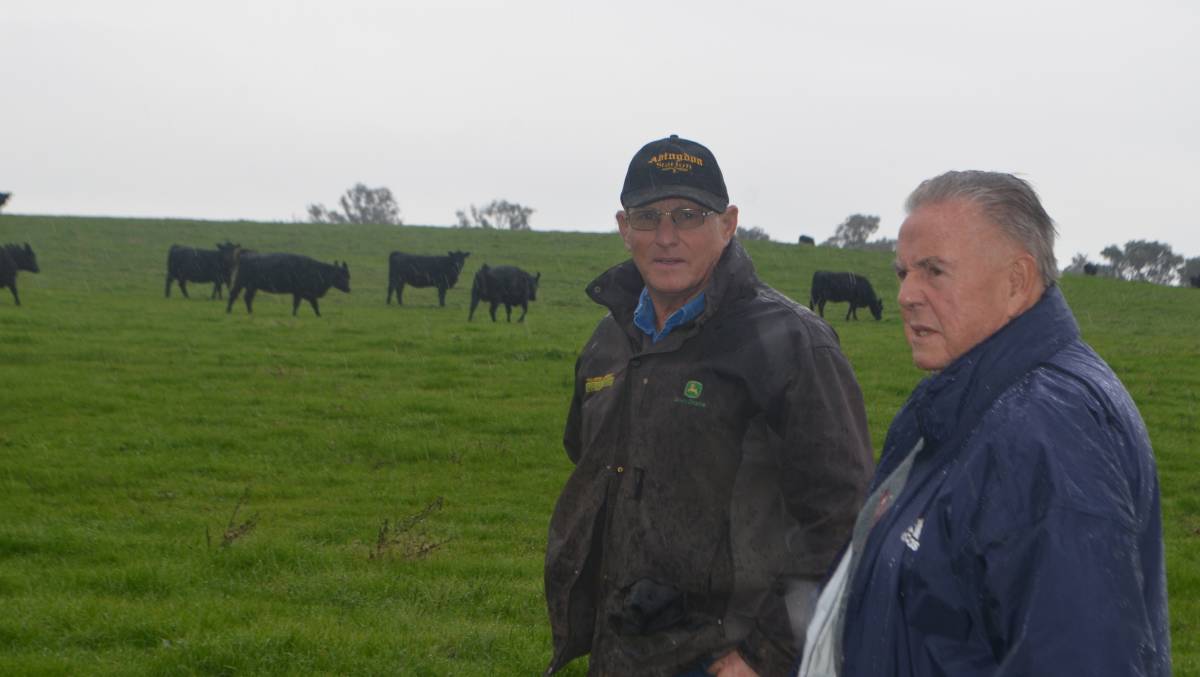 “There were a lot of comments suggesting it was the best sale anyone had been to this year,” Mr Ferry said.

Certainly the quality of the stock and their acceptance by cattle producers justifies the effort each has put into the property and stock since the purchase by Mr Ferry in 2001.

“At our first on-property sale, we sold 600 weaners, and this year achieved our aim of offering just under 1200 for sale,” Mr Ferry said.

Mr Williamson agreed, adding their intention is not to have big weights on the weaners but to present the entire drop as evenly as possible.

Since he bought the 2225ha property with a frontage to the Murrumbidgee River, Mr Ferry in association with Mr Williamson, has embarked on a major renovation program, including establishing phalaris and sub-clover pastures, building new cattle yards, sheds and fences and improving the water supply.

“It has taken some time to get things going, but it has all been worthwhile,” Mr Ferry said.

“This year’s calves were the best we have ever presented, reflecting better breeding and feeding which is a credit to Gary.”

Mr Ferry had a long and engaging career building an engineering business in Sydney.

But he has always had an affectionate interest in the land, and held a small place at Peelwood, north of Goulburn, before he purchased Abingdon Station, Gundagai, with a partner in 2001.

“My mother’s family were original settlers in 1850 at Bakers Swamp, between Molong and Orange, and one of my cousin’s still has the property,” Mr Ferry said.

“When I saw the advertisement for Abingdon, I quickly had an inspection and then rang a close friend who was involved in a big way with cattle in the US to see if he wanted to be a partner.”

Mr Ferry said the property was very attractive with its mixture of undulating country, creek flats and a boundary with the Murrumbidgee River.

Manager Gary Williamson has been with Mr Ferry since the purchase and they have worked together improving the property and lifting the standard of the Angus herd.

Currently 1200 mature Angus females are joined for a 1 July calving, but the original herd was a mix of Herefords and Angus.

“We found we were getting $200 less for our top pen of Hereford weaners than for our Angus, and I couldn’t accept that difference,” Mr Williamson said.

“Angus has a premium over other breeds and it made sense to both of us to change our herd completely.

“We concentrate on the production of weaners and at our annual sale we have a complete clearance of our annual calf drop.”

Mr Williamson said he and Mr Ferry keep an eye out for dispersal sales of Angus herds to maintain herd numbers as they don’t keep any heifers on the property.

“Our weaner turnover is quicker if we buy in our female replacements,” he said.

“We also have purchased cows from regular sources for a long time.”

When selecting their replacement sires at the Graham family’s Bongongo Angus spring sale near Coolac, Mr Williamson said he looks for a bull with the correct conformation and structure before he considers their figures.

“I am looking for bulls with sound feet, good heads and especially thick and wide behind,” he said.

Mr Ferry also said they liked bulls with a large scrotal size when considering figures such as growth, ease of calving and EMA.

Each year, all females are preg-tested and any not in calf are sold for best value, whether through local sale yards or direct to processors.

“I don’t believe in selling cows simply because they are eight or nine years old and are still weaning calves,” Mr Williamson said.

“We keep our breeders as long as they are productive, and in sound condition.”

Aware the autumn break is rarely guaranteed, Mr Williamson stores sufficient hay and silage to feed the herd through a 12 month period if necessary.

“As we gradually improve our pastures, and fence the property into smaller paddocks it will make our pasture management a lot more effective.”

Mr Williamson runs his cows in mobs of 90 to 110 and he moves them around the paddocks depending on pasture growth and always has up to 13 paddocks spelling according to the season.