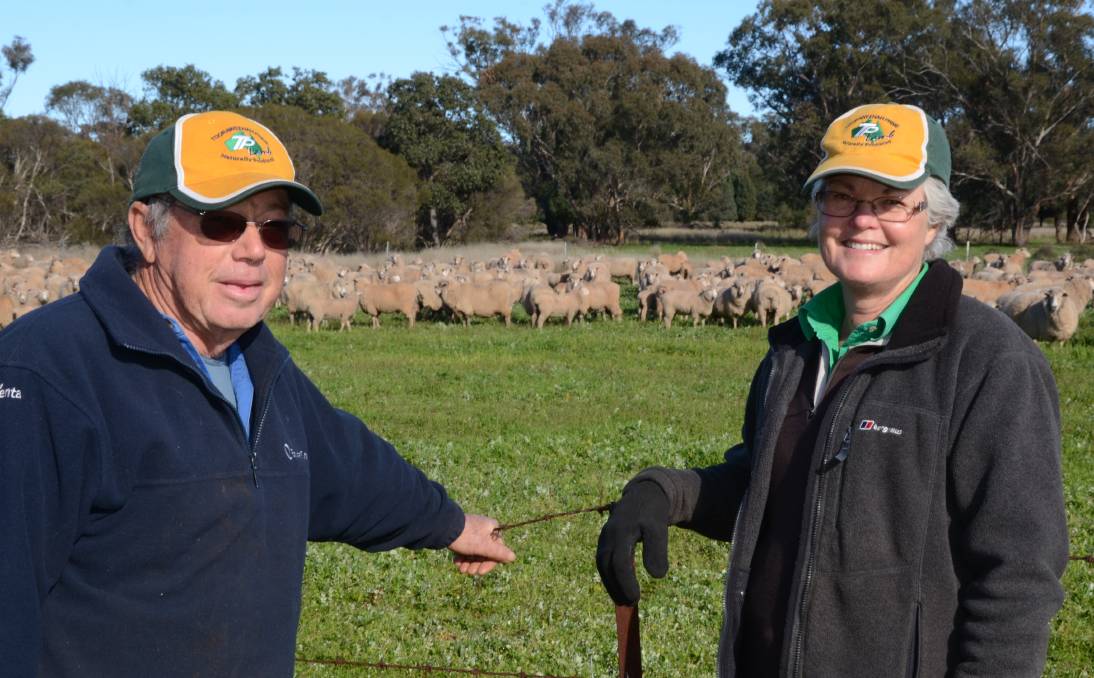 Doug and Robin Godwin look over some of their first-cross ewes with 12- to 17-week-old Coolalee and Poll Dorset lambs grazing at “Alton Park”, Mogriguy, near Dubbo.

Getting the best out of every ewe starts with maidens producing their first lamb from first joining.

AN EXPERIMENT several years ago using Coolalee rams over young first-cross ewes to overcome lambing difficulty from the ewes joining to high indexed Poll Dorsets has paid off so well for Dubbo region second-cross prime lamb breeders, Doug and Robin Godwin, they have continued the practice.

Further, they are now considering going down the path of maintaining Coolalee/Merino ewe lambs as replacements and joining them back to Coolalees.

“If you do that you are halfway towards a self-replacing flock,” Mr Godwin said.

“You’d probably still almost have the vigour of a first cross ewe, but at a considerable lower cost.”

“The Merinos are not our main game, just an opportunity buy,” he said.

“These were scanned in lamb to Coolalee rams and we will rejoin them to Coolalees.”

At present they are buying Coolalee rams from David and Julie Sawley, Barragan stud, Gilgandra.

Rams are selected for narrow shoulders for ease of lambing by maiden ewes.

However, the Godwins have not gone away from using high indexed, high growth rams.

“We still use these Poll Dorsets over our mature ewes,” Mr Godwin said.

These are sourced from the Kelly family’s Marocara stud, Wongarbon.

“I think with that formula we seem to be getting a lot of less difficulty with lambing and ending up with more lambs on the deck with greater ewe survival.”

Mr Godwin believes that is one of the keys to profitability in the prime lamb industry.

“Getting as many lambs on the ground and not having those difficulties with lambing because if you lose a ewe right at the point of lambing, especially if that ewe is about to have one or two lambs, you have lost everything.

You’ve lost the ewe, the lambs and the ewe’s productivity, which is very significant, if not the biggest cost of all.”

So Mr Godwin said he would prefer to have a dollar each way.

“If you really want the very high growth rates, the big indexed Dorsets will do the job, but you need big ewes to go with it to get earlier suckers with that combination.”

However, the other side is the “big drivers for profitability” – the number of ewes that survive and the number of lambs on the deck.

“So that’s why we are going the Coolalee direction of smaller framed ewes and sacrificing perhaps a little bit of growth rate.

“We don’t select from the bottom end of sale rams, but go for intermediate rams with resulting lamb birth rates appearing to be lower.”

SELLING direct to the meatworks but contracting through Tooraweenah Prime Lamb Meat Cooperative for the past 16 years has been most effective for Mogriguy district prime lamb producers Doug and Robin Godwin.

“We sell over the hook on a contract basis and have this current season’s lambs locked up to Christmas while we also sell some on a spot price,” Mr Godwin said.

Based at “Alton Park”, a little north of Dubbo, the Godwins will contract between 40 to 70 per cent of their production at what they believe the price direction is going.

“You don’t always win with contracts but you do have a price surety,” he said.

The couple believe there are several advantages of being members of the cooperative.

“You are working with like-minded producers, which gives us more opportunity to share ideas in production and marketing,” Mr Godwin said.

“We get very good feedback when we trade over the hooks and by collective marketing, if a problem arises we have sufficient runs on the boards with various processors that we can work out a solution.”

Mrs Godwin said they had certainty in their pricing through contracting.

“We know what we are going to get so can plan ahead.”

They plan to get two to three drafts of suckers off the property before weaning.

The first draft was of big lambs averaging 45 kilograms and weighing up to 54kg after a five hour lock up.

Another draft will go this week.

Mr Godwin said once weaned the ewes are dried off and then got back into lamb as soon as possible.

“We have plenty of feed at the moment and the lambs are going well, but we also have an opportunity feedlot for the drier times,” he said.

“With grain prices the way they are feeding to finish when we have to is certainly a proposition.”

Keeping abreast of market trends they now plan to start lambing in early autumn from a spring joining and then at different times with mobs through winter months and will have some ewes lambing into spring.

They then finish the season with a late lambing mob in late September – early October.

“By doing this we try to capture the peaks at various periods throughout the prime lamb year,” he said.

Single and twinners are separated at scanning with twinners placed on to better paddocks or given grain if the season demands.

Mr Godwin said that while lambing has been good this season, lambing percentages last year were extraordinary.

“We aim for about 140pc from our first cross ewes, but twinners came out at 175pc and singles at 90pc.

“All up we were averaging about 160pc across both, but that was an exceptional year.”