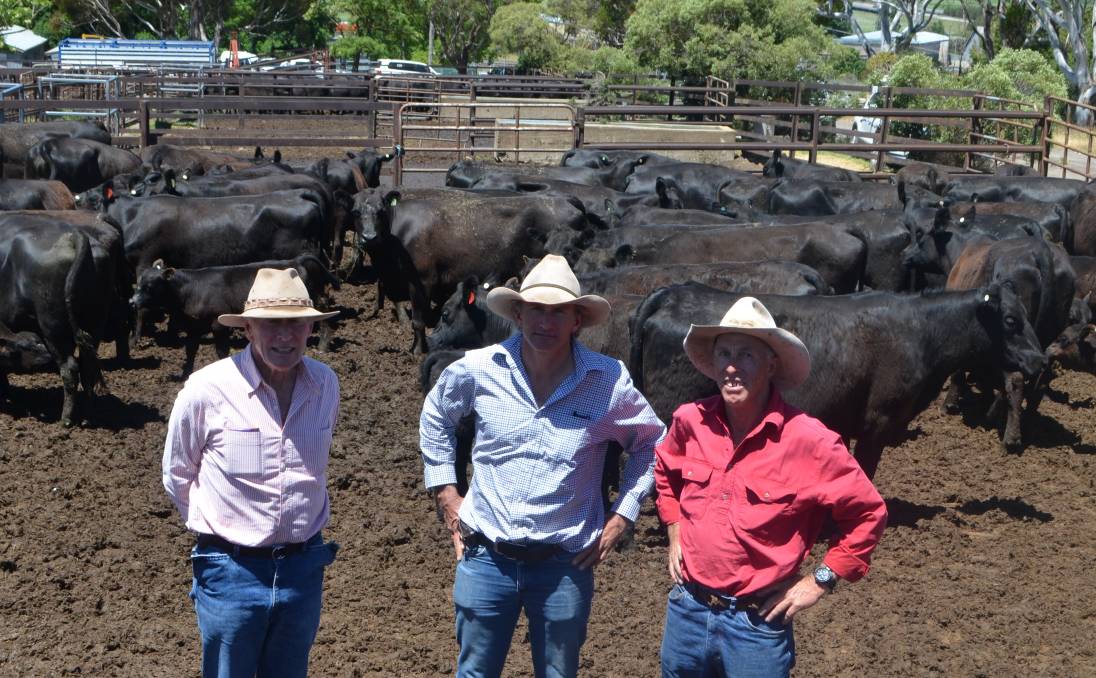 Vendors John, Angus and Andy Campbell, Taralga, with their pen of PTIC two year cows with calves, sold to $2750. They have offered their surplus Hazeldean-blood Angus females through this sale for many years.

With 767 cattle on offer at the special cattle sale at Goulburn last Thursday, competition reflected the quality of the stock on offer, with strong interest in the better pens.

WITH 767 cattle on offer at the special cattle sale at Goulburn last Thursday, competition reflected the quality of the stock on offer, with strong interest in the better pens with a levelling of prices paid.

Landmark Goulburn manager Daniel Croker quoted the market as being “firm on current values and perhaps a bit stronger for the better quality cattle, with overall sale average being $2019”.

“The season has been tough on the southern tablelands, but most cattle presented in good condition and were sought after,” Mr Croker said.

A feature of the sale was the annual offering of surplus females from John, Andy and Angus Campbell, Taralga, who have been sourcing Hazeldean genetics for the past 30 years.

This year they offered 265 mixed-age females, rejoined to Hazeldean bulls on September 1, and with calves, receiving $2750 for their top pen of 21 two-year-old cows with September and October-drop calves.

Speaking after the sale, John Campbell said the prices reflected current interest in quality cattle and were on par with last year.

“We sell a portion of our females every year,” Mr Campbell said.

“Our top pens were bought by a repeat buyer which indicates our breeding program is in the right direction.”

The top price of $3050 was paid for 14 Red Angus cows with calves and PTIC to Angus bulls from Tarago Pastoral Co, Goulburn.

The business also sold 19 Angus cows from two to six years with calves and PTIC for $3000, with the Chisholm family, at Gundagai selling 28 Angus cows with calves for $2425.

The few pens of yearling steers sold well, with Barbara Fairfax, Goulburn, receiving $1240 for her seven 10- to 11-month-old Angus/Shorthorn-cross calves, while the Funnell family from Goulburn, sold five older Hereford steers for $1300.

Other good prices included $1100 paid for eight black baldy steers from the Keith family, Taralga, with the Cunningham family, Goulburn, receiving $1000 for their pen of 11 Angus-cross steers.

There were limited pens of yearling heifers, but the Keiths sold nine Angus heifers for $990, while Russell and Sally Cooper, Marulan, sold 15 18- to 12-month-old Red Angus heifers PTIC to Red Angus bulls for $1475.

The sale was conducted by Goulburn agents, Landmark and Michael Hall Livestock and Property.