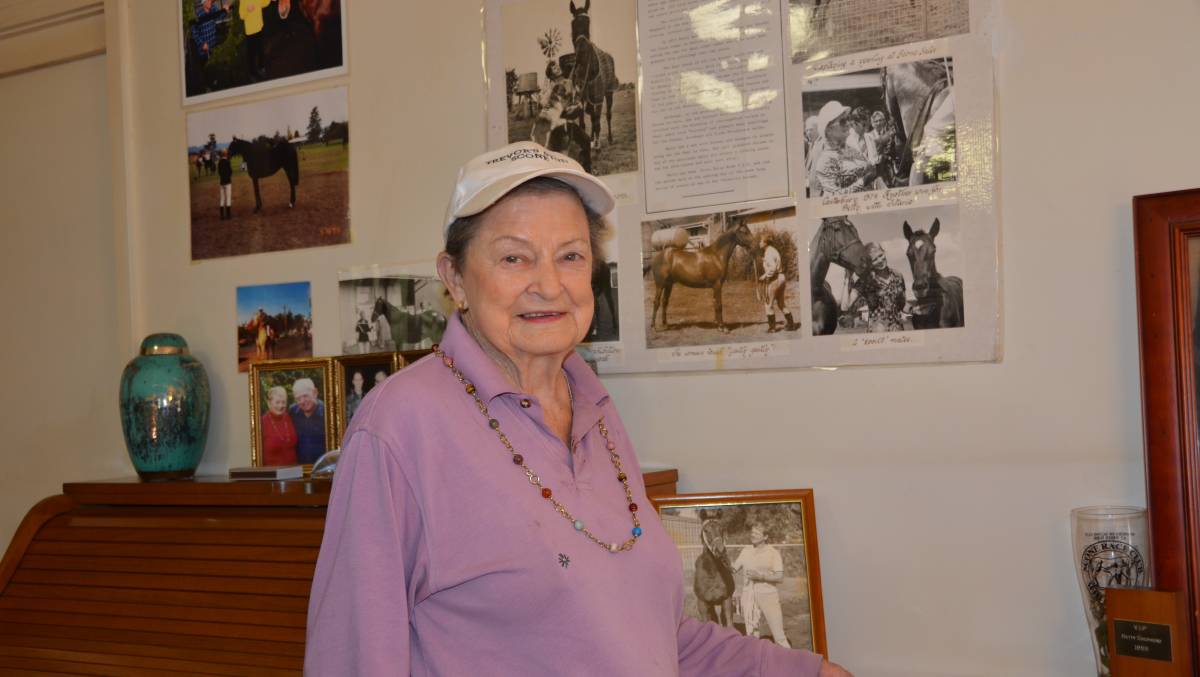 Betty Shepherd with her wall of racing memories at her Scone home. Photo by Virginia Harvey

Scone's Betty Shepherd was a pioneer of racing.

AUSTRALIA’S first “lady of racing” Gai Waterhouse may be leading the nation’s women trainers of today, but 85 year-old Betty Shepherd was a pioneer of the sport.

I recently caught up with Betty at her home in Scone, at the place where she, along with her late husband Archie, trained a few racehorses. Betty’s most famous horse was her celebrated gelding Trevors.

It is 50 years since the Scone horsewoman prepared Trevors for an excellent fourth place in the Caulfield Cup, before being unplaced 14th of 22 runners in the Melbourne Cup in 1966 – a Cup double that was won by Tommy Smith’s mighty Galilee.

Running down the track in Tobin Bronze’s W.S. Cox Plate, Trevors was also placed third in the Hotham Handicap (today known as the Lexus Handicap) at Flemington to Aveniam.

Belonging to the earliest group of Australia’s woman trainers, Betty led the way when pushing the boundaries and taking on the men at the 1966 big spring races in Melbourne.

In the 1960s and 1970s only a rare few women were registered with training licences.

Others who trained along with Betty Shepherd during the early times include Sydney’s Betty Lane, who was forced to Dubbo to initiate her career as she was not originally permitted to train in Sydney, and country girls Eva Langworthy and Colleen Underhill, before Deirdre Stein and long-time Canberra/Bombala trainer Barbara Joseph emerged.

Belonging to the earliest group of Australia’s woman trainers, Betty led the way when pushing the boundaries and taking on the men at the 1966 big spring races in Melbourne. In the 1960s and 1970s only a rare few women were registered with training licences.

Betty Shepherd cannot remember any time in her life that she did not love horses.

As Archie was a horse trainer, it was only natural that Betty’s love for the four-legged animals led her into the same field of training.

Trevors was originally being prepared under Archie’s name.

“It was Ken Thomas (a stipendiary steward) from Tamworth who suggested to me one day that I should apply for my trainer’s licence,” Betty said.

“So I went to Tamworth for an interview and that is how I got my licence.”

Being trained from an adjacent yard to her home, Betty said she would ride Trevors most days down to the old White Park racecourse on the southern side of Scone for trackwork.

The 1959-foaled Trevors earned his 1966 Melbourne racing trip after good efforts earlier that spring in Sydney.

Bought privately as a young horse, Trevors won 14 races in total with other wins including the STC W.J. McKell Cup, as well as a second in the AJC Summer Cup, and fourths in the celebrated Epsom Handicap and Hill Stakes all in Sydney.

Providing Betty with many fond memories, Trevors is still not very far away as he is buried under a shrub in her Scone backyard.

By good Hyperion influence Rockefella, Good Brandy raced from sprints to middle distances, and was produced from a half-sister to Delville Wood, a five-time champion Australian sire from stud use at Kia Ora Stud Scone.

Other excellent gallopers sired by Good Brandy include the wonderful Tauto – who won 10 stakes races including the 1971 W.S. Cox Plate – Saydor, Brandy Lad, and Quiet Snort.

Picnic meets get their own gig

PICNIC racing in NSW is now reaping some benefits from success of The Championships races and programs, its theme spreading with announcement of the inaugural NSW Picnic Champion Series which was initiated last month.

Judged via a points system, the Picnic Champion Series Final is scheduled to be included on the Dubbo Gold Cup program next year, on Sunday September 17, with Racing NSW providing $50,000 in prizemoney.

“We expect this series to generate quite a bit of interest and also improve horse attendance at our picnic meets,” she said.

“Instead of the qualifying heats of the country and provincial championship races, picnic horses will acquire points at every picnic race meeting in which they compete.

“As further incentive, the NSW Picnic Racing Association will also offer a significant bonus to the riders that attend the most meetings for the year.

“We are also hoping to have the minimum weight for approved riders increased by two kilograms.”