A Holstein heifer calf sold for a massive $251,000 at International Dairy Week at Tatura, Victoria, on Wednesday night.

A Holstein heifer calf sold for a massive $251,000 at International Dairy Week at Tatura, Victoria, on Wednesday night. 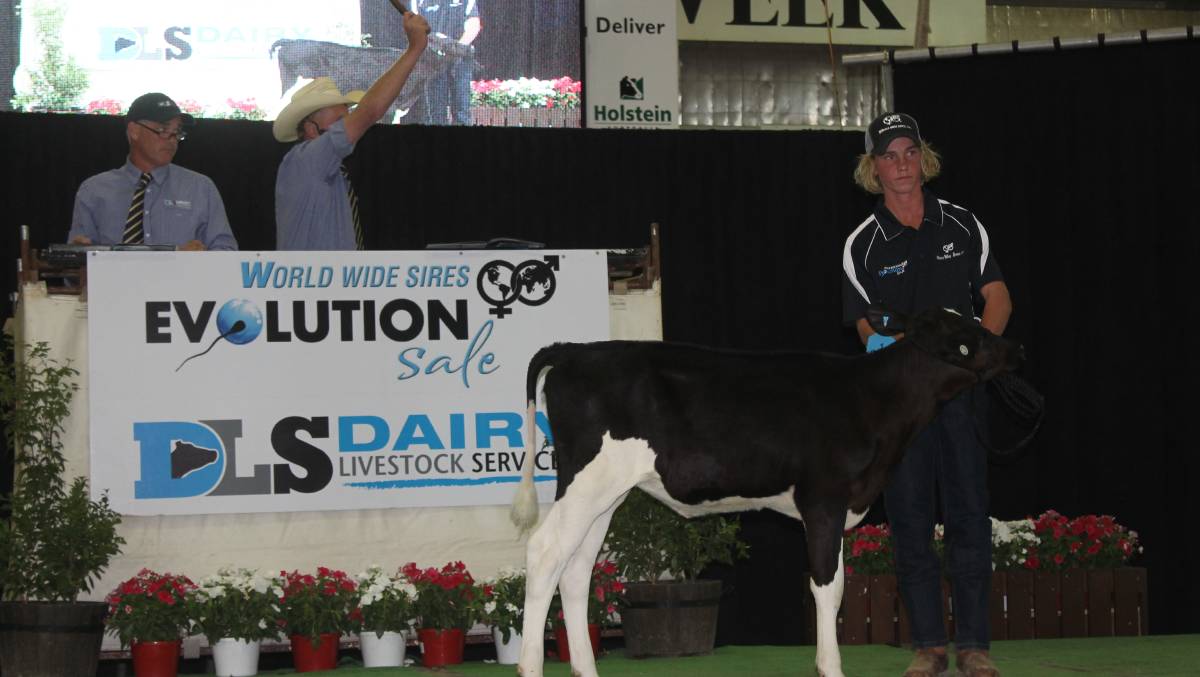 The impressive calf just prior to sale.

The calf, which sold during the World Wide Series Evolution Sale run by Dairy Livestock Services, smashed the previous Australian record of $112,000 set in April 2015 at a sale at Lardner Park, Vic.

The calf, Lightning Ridge CMD Jedi Gigi, was bought by United States based company Sexing Technologies, Texas, and will be transported live back to the country.

Jedi Gigi is a full sister to dam Blondin Halogen Golden V6-two year-old and was the highest ever genomic Total Production Index (GTPI) heifer to be sold in the world.

DLS auctioneer Brian Leslie said it was a significant investment for the industry.

“For us these guys have brought the best genetics from the other end of the world to here, it shows you now that the world is a very small place for genetics,” Mr Leslie said.

“The buyer was from the US, the losing bidder was from Canada, we had a lot of activity for her.

“It’s a world-class pedigree, she is highest GPTI animal that has been sold in the world.

Mr Moscript said its genomic numbers were what really stood out.

“She was the highest heifer ever to sell on GTPI in the world and because of that there was strong interest from some of the biggest AI (artificial insemination) companies in the world who are looking for high females for their own internal breeding programs,” Mr Moscript said.

“Declan and I own a lot of cattle together and we are always looking for unique opportunities to bring to Australia and Declan found these embryos.

“Our goal was to have a couple of heifers, which would be good heifers for Australian breeders and we just hit a home run with this one.”

Mr Patten said the journey started with a Canadian heifer they bought a few years ago.

“We bought her for $175,000 (Canadian) – I loved her breakdowns, her genomics, she was good, she had great pedigree, so I bought embryos from her and then brought them here (to Australia),” Mr Patten said.

The other heifer sold was Lightning Ridge CMD Jedi Yahoo, which was the second to price of the sale and sold for $37,000 to Guye Family & R&H Perrett, Barwon Downs, Vic.

“This is why we bought her – to prove there is real money in genetics,” he said.

“At the end of the day it's a numbers game - you can understand numbers, just as much as him (the investor), because the higher the number the better it is.

“We have a lot of investors because they understand numbers, they don’t understand genetics or breeding, I know that, that’s why I invest it in the right way for them.”

Buyer representative Sexing Technologies dairy program co-ordinator Dan Carroll, who judged the International Dairy Week All Breeds National Youth Show on Monday, said he learned about the calf about a month ago after it received its genomic proof identifying its outstanding genetic value.

Companies such as Sexing Technology were interested whenever high-ranking multiple-trait animals such as this calf came onto the market as they gave the opportunity to produce more calves to assist farmers throughout the world, he said.

The calf would now be put into quarantine to be shipped back to the United States.

It would then be put into the female herd at Sexing Technologies to create sons and daughters for the next generation of dairy animals.

Reproductive work with the calf would enable viable embryos to be produced from it to make multiple calves.

Mr Caroll said he was extremely proud to be part of the historic sale.

"It shows good genetics can show up anywhere in the world," he said.

"Good genetics are where you find them."

Sexing Technologies, which is based in Texas, has elite dairy animals in several breeds, including Holsteins, Jerseys and Brown Swiss.

The Holstein sale offered 34 lots at an average of $14,760, which Mr Leslie said was “a wonderful sale right the way through”.

“The cattle were very good, presented really good and I thought the spirit of the sale was very strong all the way through,” he said.

“(A sale like this) gives confidence to the people who are breeding the cattle as there is great demand for them.

“They don’t all make record prices, but they realise their value.

“I have been really happy that people have been able to buy at these sales and do really well with them. We sold several tonight, that they are bred from cattle that were sold here and that’s a real positive.”