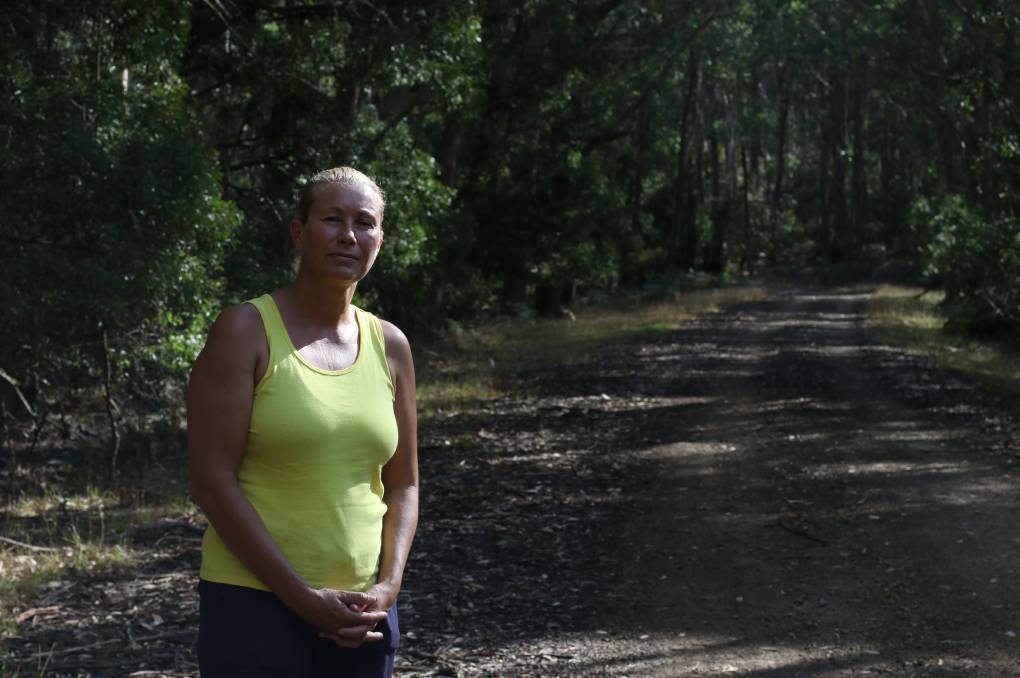 "Glen Eden" resident Gina Hayes at the entrance to the Gingkin property near Oberon where an aerial culling operation by national parks saw a helicopter fly over the property shooting deer in Kanangra Boyd park.

“Glen Eden” tenant Gina Hayes, Oberon, had just farewelled friends on a calm autumn afternoon on a property nestled next to the Kanangra Boyd National Park in central NSW.

On the horizon, she saw a helicopter emerging from the afternoon glow. The whirring sound came closer and closer. Then suddenly it was right over the property, she alleges, not far from her house and then the sound of rapid-fire gunshots rung out from above. She ran in panic into the house.

Cattle grazing on the “Glen Eden” property owned by Ray Pemberton scattered in all directions, she says. The rapid-fire shots continued for at least 10 minutes. It wasn’t a scene from the film Apocalypse Now. It was feral deer aerial culling by the NSW National Parks and Wildlife Service.

Ms Hayes, with no phone services available in her remote location, says she stayed in the house for the whole of the next day, too scared to come out. Her idyllic location on Edith Road, is next to the world famous Jenolan Caves and near a location ironically called Shooter’s Hill.

“The first question I asked myself was ‘who is it?’.  I’d never heard gunfire like that in my life. All the cattle started running everywhere. I was worried for them because they can break their legs if they run at speed into a wombat hole. I had no idea who they were or what they were shooting at. It was so  intense three trees came down. They were shooting up into the hill for about 10-15 minutes.”

Landowner Ray Pemberton wasn’t at “Glen Eden” at the time of the culling operation, which took place in May last year.  National Parks maintains he was told about the operation and so were his neighbours.

For Mr Pemberton,  it was the last straw in what he says has been an upsetting number of incidents. The Oberon farmer contacted Bathurst Police, demanding action against the Parks over the operation. A licensed gun holder himself, Mr Pemberton said he reckoned the gun used was a semi-automatic, calibre .308 rifle, one of the most powerful calibre rifles.

(The NSW National Parks and Wildlife Service employs accredited shooters who operate under strict controls known as the FAAST protocols (Feral Animal Aerial Shooting Team). They have access to a semi-automatic firearm, the self-loading L1A1 gun. )

Chifley rural crime unit’s detective Bob Newman followed through Mr Pemberton’s complaint. “We confirmed the operation had happened. We couldn’t say they were shooting feral animals on Ray’s (Mr Pemberton’s) place. They appeared to be moving into the park from above Ray’s place.” Detective Newman said it appeared some shots were fired from above “Glen Eden” at the hill where they were targeting feral deer, but he couldn’t pinpoint anything that was illegal, although he thought it was “stupid of them and they deserved a kick up the arse for it” (the National Parks). “Airspace is not private land,” he said. “ We could find no evidence they had done anything wrong.”

In a statement to The Land, NPWS acknowledged that Mr Pemberton did not want the cull done.

“NPWS acknowledges Mr Pemberton was not in favour of the May 2016 operation,” a NPWS spokesman said.  “In May 2016 NPWS conducted an aerial cull of vertebrate pests targeting deer in Kanangra Boyd National Park. Such operations are undertaken under an approved operation plan using strict protocols, including park closures, notification of neighbours and the public, and using highly trained, qualified staff who target specific species and do not discharge firearms in close proximity to members of the public or dwellings irrespective of land tenure. All adjacent landholders were notified of this operation, including Mr Pemberton. This operation targeted fallow deer which are increasing in numbers on the tablelands and cause extensive damage to the environment and crops.”

Ms Hayes says she was never warned about the operation. Two neighbours of Mr Pemberton also said they were unaware of the May 2016 operation.

One of the FAAST protocols says before an aerial culling  operation can start : “Neighbours, park users, staff and contractors notified of significant operations.”

Ray Pemberton has had “Glen Eden” for about 15 years. He denies he has ever had a good relationship with parks personnel, instead he’s had many grievances, claiming the parks had taken water from his dam for fire fighting purposes without his permission, they have laid wild dog baits on the ground which cattle on his place could have eaten.  He alleges once when he had permission to burn some grass off his property, the parks hired  a helicopter and spent the whole day watching the burning operation. He claims some one of his neighbours had cattle were destroyed after they straying into the park. But the NPWS has denied this.

“No stock have been destroyed by parks staff or contractors as a result of straying into the park and NPWS have in the past assisted in  repairing the boundary fences on ‘Glen Eden’,” a National Parks spokesperson said.

Shooters, Fishers, Farmers Party NSW MLC Robert Brown said on the back of the incident highlighted by The Land, he would introduce  a bill to make it illegal for the NPWS to use the airspace above private land to conduct aerial culling.

“To be flying over parts of a farmer’s property and using an SLR L1A1 is an absolute no-no. We have to do something about that, that has to be stopped.” He said aerial culling was a huge waste of resources, with helicopters often costing about $1200 an hour to hire, with a team of three required in the helicopter, a pilot, shooter and an observer. “They are supposed to come from behind the prey and shoot them, then wait while the observer sees if the animal has been killed, instead they often fly through shooting and then return to inspect the kill. This is costing the taxpayer an enormous amount of money,” Mr Brown said.