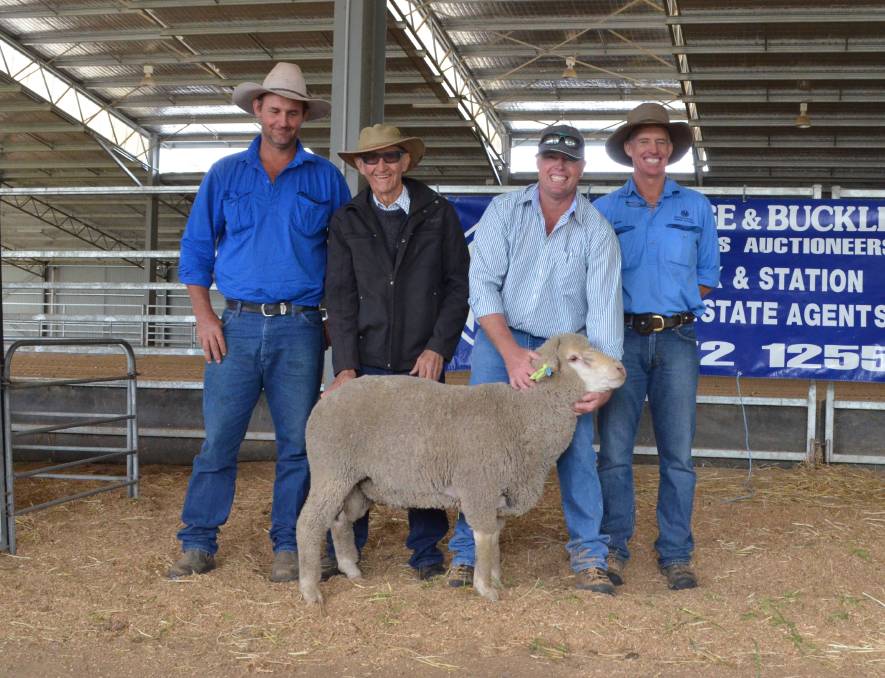 Good mix of new and repeat buyers pushed prices to a $2300 high at the inaugural Harewood Dohne ram sale in Armidale with 27 of the 47 rams selling to average $963.

THE inaugural Harewood Dohne ram sale hosted at the Armidale exhibition center last Tuesday attracted a good mix of new and repeat buyers and pushed prices to a $2300 high.

Stud principal, Justin Tombs, sold 27 of the 47 rams offered at auction to average $963.

Described as the “most complete ram in the sale” the father and son duo also complimented the ram’s good carcase , wool density, weight and high index which measured 157.

“We were after fresh blood to breed our own commercial rams,” Trent Hall said. The Halls run a pure Dohne operation and join 1250 ewes annually.

The Hall family recently purchased half the ewe flock from Guyra Dohne stud, New England Dohnes and felt this Harewood ram would suit their operation well. The Halls, who produce trade weight lambs and market them through the Tamworth sale yards, also purchased a second ram for $1600.

“Our second purchase, had the most superior wool of all the rams in the sale - clean, bright, dense wool - we are aiming to increase wool quality and weight without compromising the carcase traits,” he said.

The second highest price in the sale was $1700 for a 2015-drop ram with yearling weight of 5.4kg, EMD of 0.5mm, clean fleece weight 12pc and a yearling fibre diameter of -0.1 micron, purchased by Patrick White, “Alvaholme”, Narromine.

Representing White Partnership, Mr White has been purchasing Harewood rams for the past five years and secured 10 rams to average $940.

Since using Harewood Dohne’s, Mr White has noticed an improvement in flock fertility, an ability to maintain micron and a 30pc increase in lambing percentage.

“We are currently joining the Dohne rams to F2/F3 Merino ewes but have a goal to move into a 1500 head pure Dohne operation,” Mr White said. “The Dohne’s do better and are versatile, especially on our country.”

Mr White runs a lamb feedlot as part of their sheep operation and said keeping them under weight is their biggest trouble.

The sale was conducted by Armitage and Buckley with Victor Moar controlling the bids.