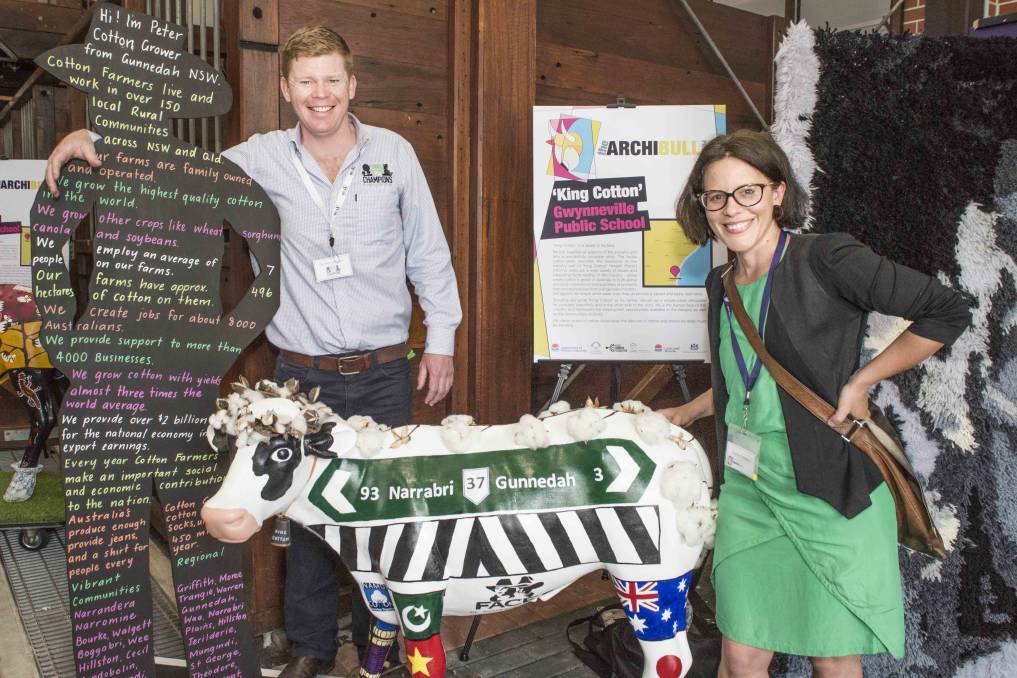 Meet a young man whose passion ag has taken him from Mount George to Gunnedah, Vietnam, and the Huon Valley.

Though Dwayne now works as an agronomy and livestock consultant in Tasmania he regularly bounces ideas off his former boss, who has become a role model to him through the Landmark Graduate Program.

Dwayne’s next phone call is to Lynne Strong and together they discuss the schools Dwayne will mentor as part of The Archibull Prize, where he will become the friendly face of agriculture to many urban students. Learning from the best and then sharing his knowledge is a pathway Dwayne is happy to follow.

“The day I finished university I moved straight to Gunnedah and started checking cotton for Landmark,” he says.

Dwayne – from the tiny Manning Valley village of Mount George – says his career was kick-started when he was accepted into the Landmark Graduate Program on completion of his Bachelor of Agricultural Science at Charles Sturt University.

“At university you’re pumped up and told you know everything and then you get out in the real world and find you don’t know squat. - Dwayne Schubert

Each year Landmark offers this innovative program to final year and graduate agricultural students with the aim of fostering the next generation of industry experts.

Through formal training and hands-on experience graduates gain a solid knowledge base that will see them in good stead through-out their careers.

“Graduates out of university are hand-picked by Landmark, then they’re given a store or a branch to go to anywhere in Australia and are skilled up in their area of interest. In Dwayne’s case it was agronomy,” Aaron says.

Aaron and his father Mark are well qualified to be role models for upcoming agronomists. They started working together in their own business supplying spraying, fertiliser, produce and merchandise to local farmers and when Aaron joined Landmark in 2008 his father was quick to follow.

“Dad has been my inspiration through the family business (known as Goddards) and in Dwayne we both saw someone who was diligent, capable, and respectful with a keenness to learn,” Aaron said.

“When he completed the graduate program we were looking for another agronomist so he started full-time with us.”

The offer of full-time employment at Gunnedah was testament to Dwayne’s work ethic and enthusiasm for his job, but he is quick to acknowledge the role of Aaron and Mark in his fledgling career.

“In a professional and personal sense those guys really took me under their wing and went above and beyond to help me,” Dwayne says.

“At university you’re pumped up and told you know everything and then you get out in the real world and find you don’t know squat.

“Mark and Aaron taught me what the real world was about. They were very patient, and gave me the ability to do my own thing.

“They let me make decisions by myself but if I had any questions there were no problems in picking up the phone and asking their opinions. I can honestly count them as two of my really good mates.”

Dwayne has taken this flying start in agronomy and is now putting it into practice in the rolling green hills of the Huon Valley in Tasmania where he works for Serve-Ag, a privately owned agricultural company, overseeing pastures, cereals and fodder crops and dealing with sheep, beef cattle and dairies.

It is a world away from the vast open plains of Gunnedah and endless acres of white cotton, and another world entirely from the Mekong Delta in Vietnam and the Canterbury Plains of New Zealand, which he has visited on study tours.

But all these experiences confirm his choice of career has been the right one, and makes him eager to share his story with the wider community.

“It concerns me that in a world where information sharing is often only the touch of a button away, sharing the stories of the people behind the clothes we wear and the food we eat is becoming a lost art,” he says.

“I feel it is very important to take every opportunity to develop the skills to effectively communicate to people outside of our industry and to tell them how we strive to be productive and sustainable.”

With this ethos in mind Dwayne was selected for the Young Farming Champions Program in 2014. The program brings together agriculture’s future leaders and ambassadors and gives them the skills Dwayne was seeking; skills in media and presentation and in communication and professional development. As part of the program Dwayne goes to schools with The Archibull Prize and talks to dominantly urban students about agriculture.

“I don’t know if many of the kids I have been talking to would be considering a career in agriculture,” he says, “but if I can be a fun, friendly face they remember and appreciate then I am doing my job and leaving them with a positive impression of our industry.”

In doing so Dwayne is himself becoming a role model and it is a position to which Aaron feels he will be most suited.

“He’s fantastic with people in general and has a great attitude, which is important as a role model because it’s all about putting things into action,” Aaron says. “He has an infectious personality and that’s what the industry needs. He’s a great role model for the success of agriculture.”

Dwayne’s success is a reflection of the Landmark Graduate Program and Young Farming Champions, two leading-edge pathways for the agricultural leaders of tomorrow. These programs understand the need to nurture and promote strong, competent voices, and realise by providing role models and mentors for those young voices there will be a transfer of information and knowledge to the wider community.

And what does Dwayne think of becoming a role model to the next generation?

This is the final installment of a three-part series on young agricultural leaders, in conjunction with Art4Agriculture and writer Mandy McKeesick. Previous profiles included Max Edwards and Peta Bradley.