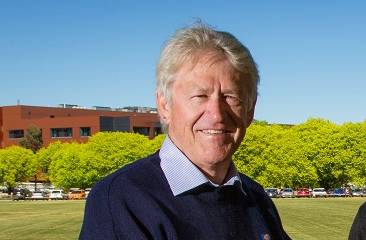 Dr Greg Bender's PhD involved listening to communications between plant roots and soil biology to recognise and understand the relationships and systems between them. Photo by Nick Huggins.

Dr Greg Bender can thank his father-in-law, a scholar of the classics, for inspiring the methodology of deduction he used to gain his PhD.

“The most common methodology for the past 150 years has been reductionism where everything is taken to the smallest possible components, atoms and molecules, in the hope the bigger picture will emerge and explain everything,” he said.

“This application is ideal for physics and chemistry and rolls out into better technology and more products, widgets and gadgets for general consumption.”

“However, this methodology is not suitable for living, biological systems which include agriculture and medicine. Recognising and understanding the relationships between all living things is fundamental to providing what soil communities need in order for the entire connected systems to reach full genetic potential,” he said.

Deduction is defined as looking for facts to challenge the theory and create a more useful one.

And in the beginning…

In 1973, Greg Bender wanted to be an organic farmer on his family’s property near Lismore.

This wasn’t to be, so a science teaching scholarship to Wagga Teachers College (later to become Charles Sturt University [CSU]) enticed him to the Riverina. After graduating he taught for two years at a high school in western Sydney where he felt like Sidney Poitier out of “To Sir With Love”.

Relocating to Canberra in 1978, Mr Bender enrolled in a zoology degree at the Australian National University (ANU) but, dissecting cane toads wasn’t satisfying his curiosity so, winning a position as a laboratory technician, enabled him to re-enrol in another degree – this time majoring in botany, microbiology and biochemistry.

“Studying communication between plant roots and soil microbes literally opened vast new worlds for me and I knew where I was meant to be. I was fortunate to be in the company of visionary biologists and ecologists including Barry Rolfe, John Shine and Adrian Gibbs and, when Barry offered a scholarship to do my PhD, I quickly accepted his offer “

“During the first stint at ANU, I’d already published some peer-reviewed papers for journals which meant my academic standards were well established.”

Even the most simple life-forms have relationships in order for them to survive and function; these are living systems - Dr Greg Bender

But that’s impossible, they said.

From observations of the elm tree family with legume-like nodules fixing nitrogen (located in a very remote area of New Guinea), Mr Bender’s hypothesis was formulated; can the same structures that fix nitrogen on the roots of legumes be developed on wheat?

In botanical terms, it was a huge leap to extend this concept into the family of grasses, however, Mr Bender successfully manipulated genes in nitrogen-fixing bacteria to recognise genes in new plant hosts which are different to those in clover and legumes.

Why this was so radical is that legumes and elms belong to the dicotyledon (taproot structure) family, while grasses are in the monocotyledon group; this was ground breaking and original science. Arbuscular mycorrhizal fungi were just one of the life forms Greg Bender learned about when studying soil microbiology. "These filaments (white threads) act as communication and nutrition channels for plant roots and indicate, healthy functioning soils.Photo from Radical Mycology.

On completion of his PhD, Dr Bender joined the company Inoculant Services (IS) near Albury as science and product development manager, manufacturing legume inoculant (rhizobium bacteria) that are widely used for legume crops and pastures across Australia.

While with IS he obtained a licence from CSIRO to develop and manufacture a biological control agent for plague locusts. The agent, metarhizium fungi, was mixed with vegetable oil and sprayed over hatching sites to infect the emerging locust pupae. This product is known as ‘Green Guard’.

Another successful project, in collaboration with CSU, discovered and developed a new species of beneficial soil fungus to enhance the growth of wheat and canola.

With these successes embellishing his career, Dr Bender was appointed as Grains Research and Development Corporation soil biology program coordinator from 2001 until 2006. As well as directing research projects, Dr Bender wrote an investment plan for the $10-million program and then managed it.

While researching and analysing the results of various projects, it was here and then, the satori moment came to him; organic matter (OM) matters and soil biomes are the solution to haphazard crop results.

This defining moment came after looking at the growing environments for soil fungi and bacteria – there was no need to grow microbes in laboratories and factories, they should be cultured where they actually live – soil culture in situ.

Dr Bender’s conclusion is simple – there isn’t a need for  artificial inputs as everything required to enable functioning soils is already there, even at levels of ten per cent or lower.

“The soil critters just need feeding so they can perform their everyday functions which are collaborating with plants, responding to photosynthesis, consuming exodates from plant roots and living symbiotically with plant communities.”

“When combined with soil, air and water, optimum conditions are created for full genetic potential to be reached by all species,” he explained.

“My path in science commenced at the molecular level however, as I learned and put theories into practice, I realised that every step included relationships; I’d moved from specifics to holistic systems,” Dr Bender said.

“Even the most simple life-forms have relationships in order for them to survive and function and this is why the biological sciences, including agriculture and medicine rely on connections and relationships to keep everything together and cohesive.”

Active carbon farming with compost; what is old is new again

Compost has been and is a beloved ingredient for home gardeners with multiple benefits for plants and overall plant systems.  Often made from ingredients from within that same garden, regular applications improve resistance to pests and diseases and is an example of a closed-loop nutrient system.

This thinking has been taken to the industrial scale by NSW Environment and Protection Authority (EPA) in their project to trial composted organic matter from household waste into paddocks. Since July 2016, the EPA has partnered with Dr Bender and business partner, Norman Marshall and their company Australian Soil Management, to conduct trials on eight agricultural enterprises across southern NSW using compost.

Each trial site was 20ha with soil tests conducted on each area prior to the applications. Every site had areas of control (no compost), three tonnes per ha and five tonnes per ha applied topically.

Compost from the Cooma Council and Carbon Mate in Wagga were designed by Dr Bender to match the needs of each specific site. In fewer than six months, results had exceeded expectations including compounded growth of OM, catalysing water holding capacity, fewer diseases, increasing root area, higher nutrient transfers and profitability. 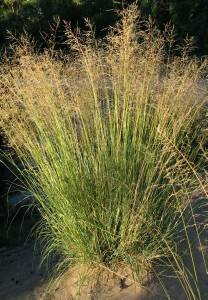 ASM has been contracted to correct the imbalance of 80,000 ha of African Love Grass on the Monaro in southern NSW. The first trial results over two years resulted in other grasses having the butrients they needed to flourish and out-compete the Love Grass. Photo from Victorian DPI.

One of the unintended outcomes was when compost was applied at three and five tonnes per ha to 20ha of African Love Grass near Cooma. After four applications over two years, the nutrient profile had increased so residual clover seed between the love grass was able to germinate, plus other introduced and native plants, thus out competing the noxious weed.

With carbon trading a political topic of interest, again, emissions reduction is just one part of the situation to keep global temperatures below the danger zone.

“Reducing the atmospheric carbon load is essential and the most effective way of achieving this is with perennial pastures and actively growing trees enabling the storage of carbon in the soil,” explained Dr Bender.

This week, Australian Soil Management received confirmation from the EPA for the second year of trials, both on the original sites, and on new properties. Dr Bender and Mr Marshall are seeking Expressions of Interest from landholders and farmers who'd like to participate in these compost trials, commencing from 1 July.

“Increasing soil carbon provides many benefits to humans, animals, birds, oceans, plants and aquatic life so, with a dollar value connected to this vital resource, this makes active carbon farming more attractive while accelerating the capabilities of the soil biomes.”

The ancient Greek’s ideas on science and philosophy are still relevant in the 21st Century as old ideas prove their value in solving very modern issues.

For more information on active carbon farming and to submit Expressions of Interest in the compost trials, visit australiansoil.com.au