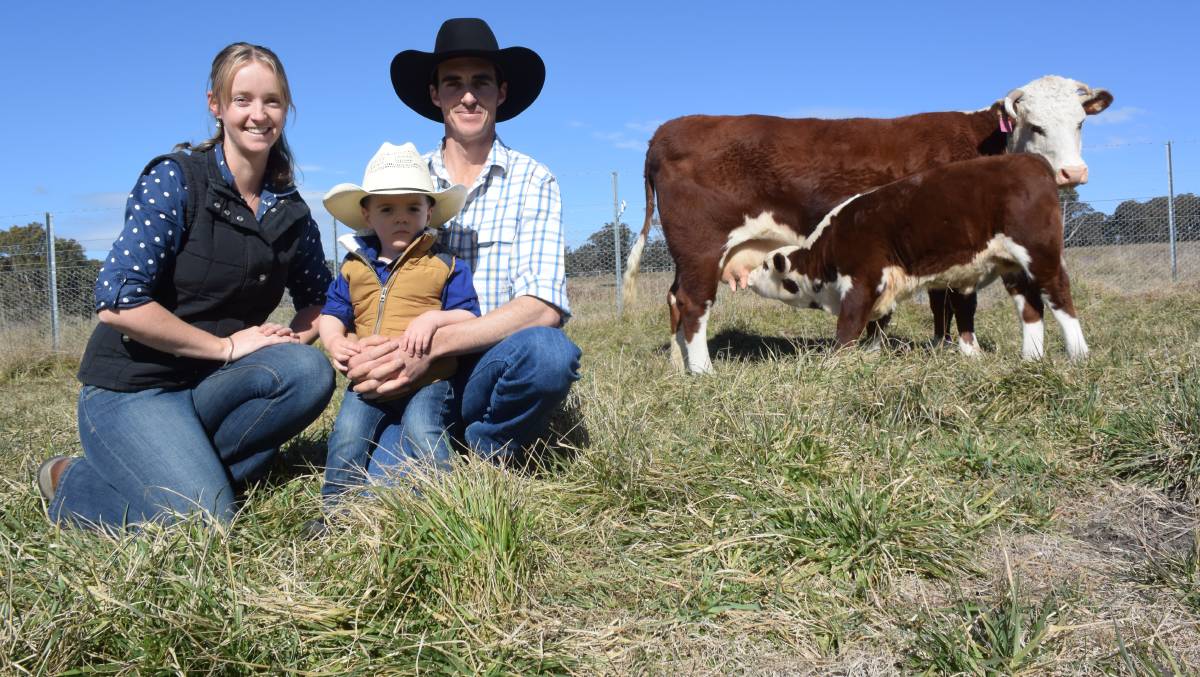 Grant, Kylie and Travis Kneipp with Battalion Constance D311, nine years old, with her calf Battalion Bomber N031. The Kneipps are excited about this new calf.

At the head of the Severn a young family is making good decisions about Hereford.

This year Grant Kneipp, 30, is confident that his current crop of bulls are of a high standard, however he does not expect to replicate last years dizzying heights. However, for a young cattleman, with a young family, the stud producer has struck a chord with the market.

“My father Roger taught me about genetic selection from a very young age,” recalled this fourth generation Kneipp at the head of the Severn, north-east of Glen Innes. His first cow died in drought, which was a learning experience, but his second Hereford, from Roger’s herd, bred-on for a decade.

These days Grant and Kylie, with their first child Travis are committed to making a go of Battalion, their own enterprise on small acreage that used to belong to Grant’s great-grandfather, Frank.

“We minimise loss through management,” said Grant. “We don’t tend to take many holidays. In the early days of the stud we had only half a dozen stud cows and we learned to avoid loss and injury by making sure we were around.”

Such vigilance paid off when Grant and Kylie –  a veterinarian assistant –  started preparing for embryo transfer work. “You've got to have all your ducks in a row for ET,” explained Kylie.

Like a lot of small-scale emerging studs, artificial insemination and embryo transfer played a key role in growing the foundation herd, with Ced Wise flushing the eggs and the Kneipp family preparing females for donation and reception.

“For a small stud this technology is the way to go,” said Grant, whose family first started embryo transfer in 2007.

Horned Herefords are what the Kneipps breed and they have no intention of moving to poll varieties. It seems their market agrees.

“Rarely do we get a mark against us on our kill sheet because of bruising and we have an increasing demand for our horned genetics, even when others are infusing poll genetics into their herd,” said Grant.

Battalion began with its founder as a keen 14 year old, whose first purchase was the stud cow Emu Hills Cath, bought for $900.

“I’d been doing stud work for my father and grandfather and had saved up some money,” Grant recalled. The cow paid for herself with her first calf and continued to do the job for 16 years.

“The female base is the most important,” he says. “As we progress in the stud game we find that more and more important.” 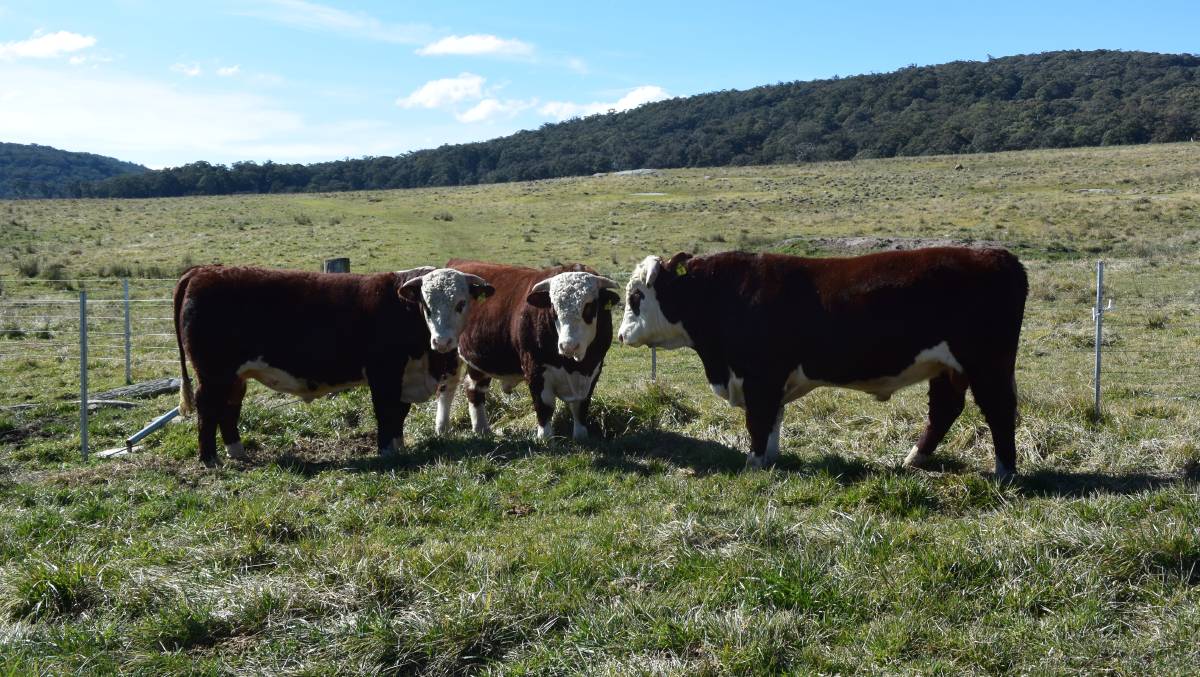 Cosmetics do play a role

The Kneipp family selects for fertility, milking ability and structure, of course, but in the Hereford game a breeder must ‘paint’ the progeny as well and Grant and Kylie find the dark coat of calves like Black Hawk do attract a following.

“We know you don’t eat the coat but we keep it in mind when we select,” Grant said. “I believe Hereford are one of the hardest breeds to get right for that reason. We have to select for structure and good carcase like everyone else but then we have to paint them with red and white in the right places.”

Grant and Kylie are fortunate to have long-time client and neighbours Tim and Sue Sloman, who put their stud genetics into practice in their commercial herd.

“Tim has the advantage of seeing my calves from a young age so he knows how they develop,” said Grant. “He knows them almost as well as we do.”

The commercial confidence helps drive the stud game, because as Grant points out it takes quite some time before a new stud can get recognised.

To produce the likes of Black Hawk Grant and Kylie knew they had the right female line but a special sire was only found after Grant’s father Roger, with mate and agent Geoff Hayes, assessed 600 potential bulls, settling on South Boorook Bombay, with out cross blood. They selected on above average weight for age, good milk, above average eye muscle area and cosmetic appeal.

“Until they can convince me that appearance has no advantage in the market we will continue to select for the complete package,” said Grant.

“We use Breedplan for comparing traits but to be honest it's the last thing I look at when selecting cattle. First assessment is visual, then pedigree –  I need to know the sire and dam lines and what they produce –  and lastly Breedplan. I don't find it overly accurate in small herds like ours and I find it doesn't always reflect the animal that stands in front of you. I prefer raw data like EMA, weight, fat cover and scrotal circumference.”

When it comes to low birth weight figures Grant Looks for balance. “I have no intention to breed smaller animals,” he said. “Too light an animal at birth can lead to a small animal at maturity. I look for the largest females that calve naturally and unassisted.” 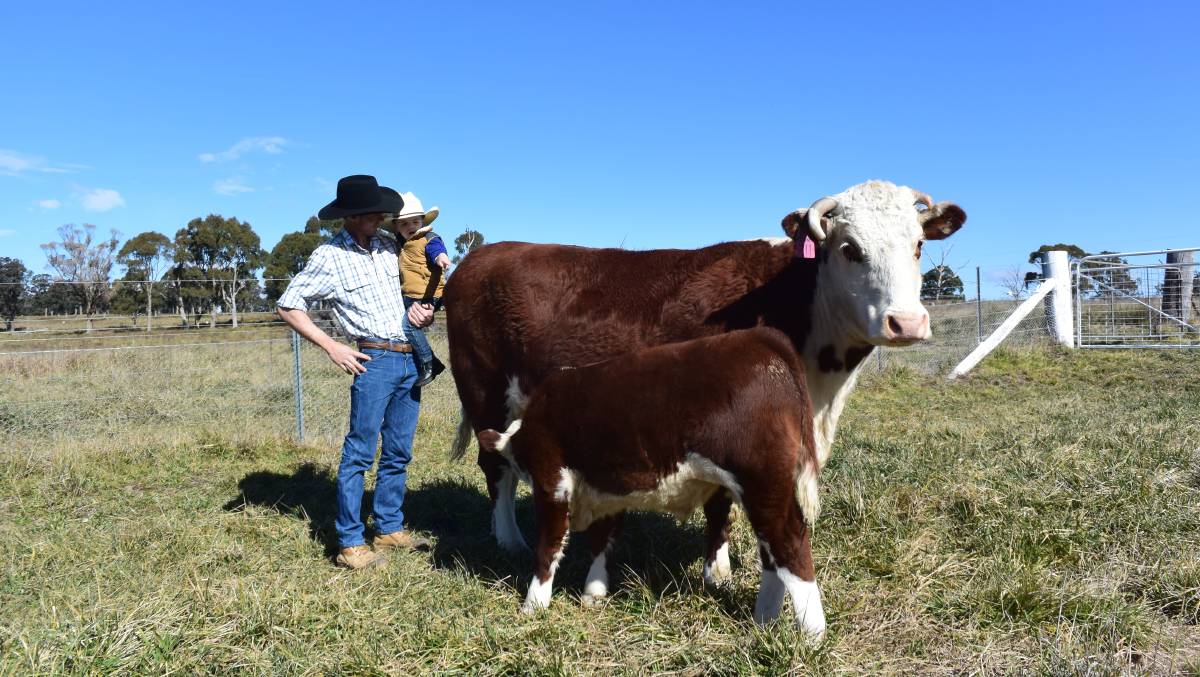 Black Hawk was purchased last year by Frank Hannigan, Franco Herefords, in half share with Ben Monie, Thornleigh Herefords. The Kneipps have retained semen for in herd use only.

“We've got a ripper calf by Black Hawk and while he's only two months old we can see his potential. We call him Battalion Bomber,” said grant who is confident in picking quality calves at a young age.

Meanwhile it's looking likely that semen from a young Battalion bull, Frontier M015, will head to Ireland to provide out cross genetics to one of the most regulated herds on the planet.

Two bulls were selected for the program, after a delegation from the Irish Hereford Society visited at Christmas and time will tell if the intense effort required to approve the bull’s semen for export will pay dividends, but it seems the young Kneipp family are headed in the right direction. The Kneipp family selects for fertility, milkiness and structure, of course, but in the Hereford game a breeder must ‘paint’ the progeny as well and Grant and Kylie find the dark coat of calves like Black Hawk do attract a following.