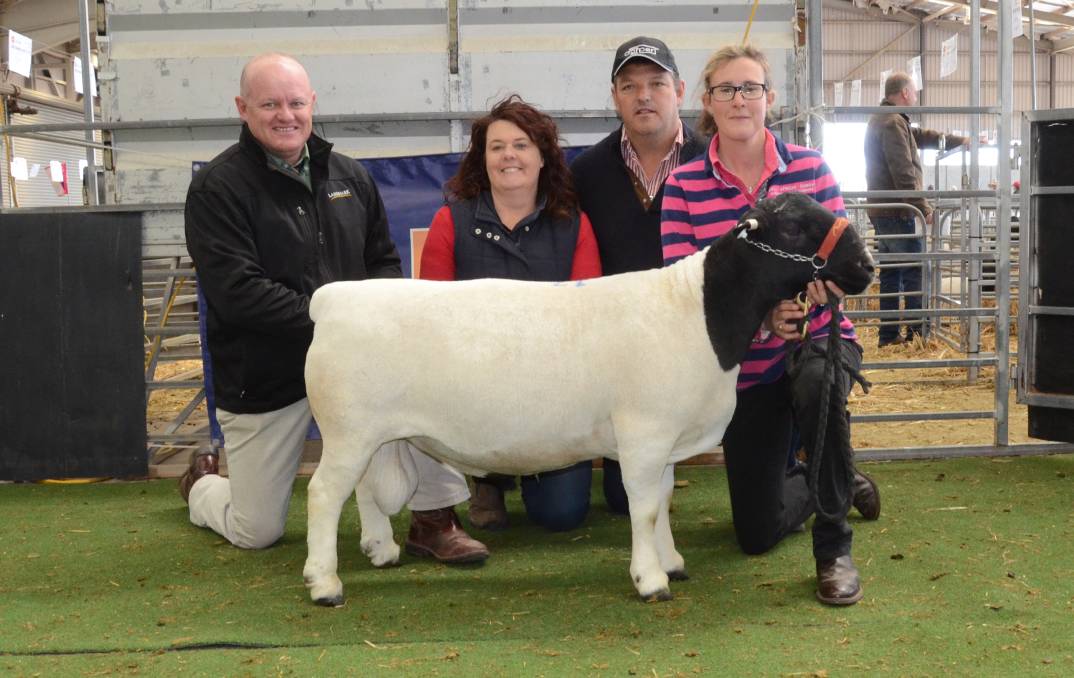 Dorpers continue to increase their popularity and the auction clearance at Dubbo boosts numbers.

DORPER rams were in demand at the 2017 National Sale at Dubbo on Wednesday, September 6, when buyers from four states secured 68 of 72 offered topping at $11,500 and averaging $2393 effecting a 94 per cent auction clearance. 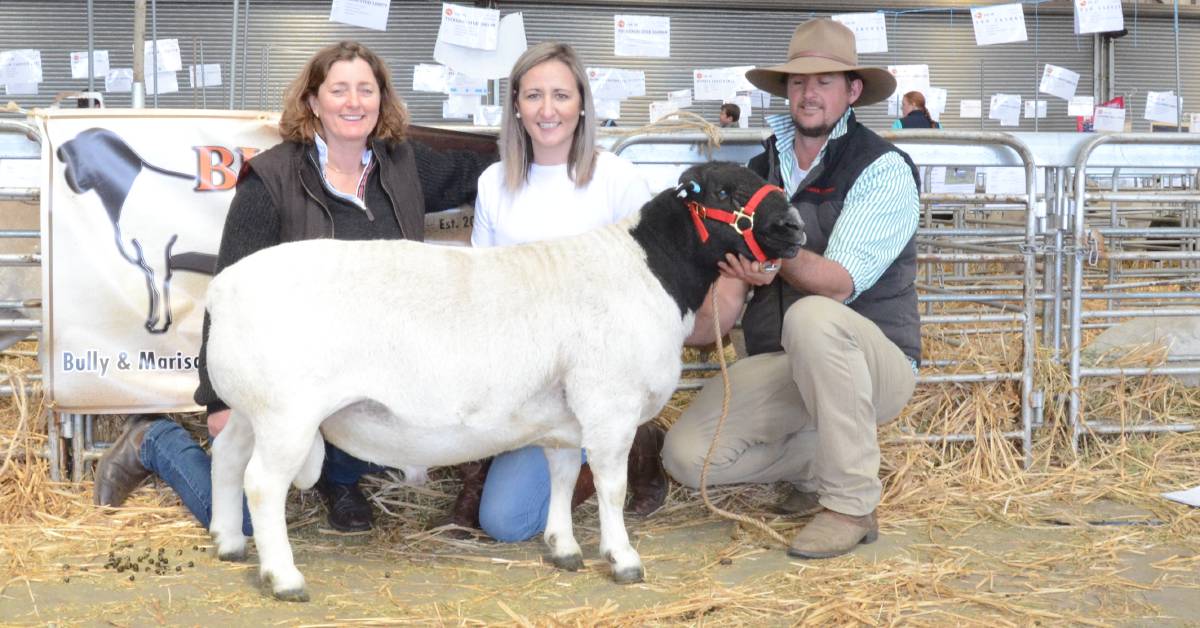 Entering the Dorper breed after some years of producing stud White Dorpers, Tanya and Brad Edson, Red Rock stud, Keith, South Australia, said they wanted to make sure their foundations were right.

To fit their requirements the couple paid the $11,500 top money for the 105.5 kilogram Type-5 Dell Dip Stick, the reserve junior champion of the 2016 National Dorper Show and one of four rams offered and sold for a $5625 average by the van Niekerk family’s Dell Dorpers, Moama,

“We’re new to breeding Dorpers so we want to get our foundations right,” Mrs Edson said.

“This ram has the length and depth of body, plus he’s such a well-balance ram, that he’ll fit our requirements very well.”

Mr Edson said the ram also had a very good temperament and the perfect black head.

“This sale gives us the confidence in what we are breeding,” she said.

This ram’s dam is Dell Baby Doll, the twice grand champion of the National Dorper Show and the sale backs up last year’s Dubbo National success when the stud sold the $15,000 second top-priced ram to Western Australia.

“We have used him extensively through the stud and also have semen retained,” Ms van Niekerk said.

Another Type-5 Dell ram selling at $6000 was a 2017 National class-winner weighing 94.5kg purchased by Scott Lochhead, Avoca Dorpers, Avoca Station, Wentworth. This ram’s dam was the senior champion at the 2017 National.

Ms Mangal said the ram suited Genelink’s breeding program. “He has depth and muscling – it’s just his size which we want,” she said.

She and partner Bronte Mawson have been breeding White Dorpers since 1997 and and saw the ram at the National.

“He carries himself well – a a very correct ram,” Ms Mangal said, “I came specifically to buy this ram after seeing him at Bendigo.”

Justin and Lorroi Kirkby, Gravesend, were busy with their two Dorper studs,  Amarula and Alurama, both selling rams for the equal third top price at $6500.

Both were Type-4 rams from Amarula weighing 74.5kg and the other from Alurama weighing 79.5kg purchased in a draft of five rams averaging $4300 and three Amarula ewes averaging $2167 by Semi Arid Ag, Overnewton Station, Mildura, Vic.

A trio from the Gett family’s Whynot stud, Narrabri, averaged $2167 and topped at $2500 twice while Southern Cross Dorpers, SXD stud, operated by Martin and Fiona Mead, Narrabri, sold six rams to $4000 and average $2350.

Top lot was a Type-5 from Amarula stud, weighing 59.5kg and joined to Amarula Coolaminya purchased by Cherilyn Lowe for her Nomuula stud, Moonbi.

Dell stud followed its ram sales success with four stud ewes topping at $3000 to average $2625. The dam of the $3000 ewe is a full sister to Dell Baby Doll III and was purchased by AA Dorper Stud, Mulgoa.

The sale was conducted by Elders and Landmark in conjunction with Paul Jameson selling for Elders and JohnSettree for Landmark, Dubbo.