A magnolia tree is a big investment in time and money, once established it becomes an important part of your garden, writes Fiona Ogilvie. 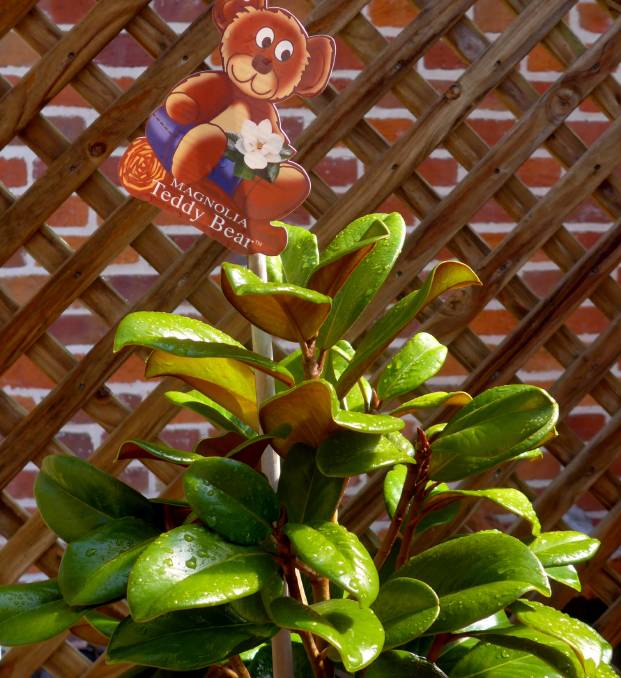 Dwarf (2m) evergreen Magnolia grandiflora ‘Teddy Bear’ is ideal for a pot, and should start flowering from its third year’s growth.

SEPTEMBER is magnolia month. This is partly because many deciduous species are flowering now, but it’s also because spring happens to be the best time to plant a magnolia.

You’re probably raising a sceptical eyebrow reading this, knowing my predilection for autumn planting in districts with hot dry summers. But a magnolia is the exception that proves the rule: its thick, fleshy roots are easily damaged when handled, and will die back from a cut or bruised portion. An autumn-planted tree has no opportunity to make new roots before winter, drastically reducing its chance of survival if conditions turn cold and wet.

A magnolia tree is a big investment in time and money, once established it becomes an important part of your garden.

Check that your intended purchase isn’t root bound, this is especially vital with a magnolia.

You want to give it the best possible start in life rather than risk wasting a possibly hefty price tag and an entire year’s growth.

This means planting in spring and keeping your tree well-watered and mulched through its first summer while it settles down and creates a new root system to bring it safely through the following winter.

Dig a big planting hole, well away from other plants with potentially competitive roots. Add plenty of compost and rotted manure. Check that your intended purchase isn’t root bound, this is especially vital with a magnolia. A two year plant in a 20-centimetre pot is fine, anything older and bigger and again you risk root damage. Anyway, small trees get away quicker. Several deciduous magnolias are frost hardy, fast growing and have large, strikingly attractive leaves. M. x soulangeana (7 metres) is probably the most commonly seen in NSW gardens, carrying a glorious mass of tulip-shaped flowers, pink or purple streaked on the outside and white inside.

The only problem with these deciduous magnolias, lovely though they are, is the dreaded late frost. You can throw lightweight horticultural fleece over a young plant but with a mature tree there’s nothing you can do except take the chance and enjoy it whenever spring is mild. It’s certainly worth it.

Alternatively, plant a summer flowering species. The Southern or Bull Bay Magnolia (M. grandiflora, 20m) from the USA is one of the best evergreen trees you can grow, with large (15cm.) shiny, dark green, oval shaped leaves with contrasting brown undersides.

Last Chance: lift and replant snowdrops (Galanthus species) as their leaves start to fade. Like lilies, snowdrops die if bulbs dry out.