Renewable energy is growing in the bush. Advocates argue local power sources should be used to supplement the grid to reduce costs. Photo Rohan Thomson.

What does a future under continued soaring power prices look like for rural industry?

Even if the NEG delivers on optimistic forecasts the power price rises of the past decade are embedded into the electricity grid, which is an integrated network that spans most South Australian, Victorian, NSW and Queensland consumers.

The further an electricity customer is from the grids’ busiest, most efficient metropolitan arms the more costly the infrastructure is to run. That means farmers, and rural and remote businesses in general, are in the firing line.

But rays of hope are coming from small scale solar and wind-powered systems which either supplement or replace grid power.

Power costs are a hot topic for rural representatives across the country like NSW Farmers, which says local power generation offers a solution.

Early adopters due to necessity, in Far Western NSW, have a 40 per cent solar utilisation rate. Many regional landholders have solar capacity and pooling resources could amplify their benefits.

Local renewables could be supply a micro grid, where a number of farmers each with battery storage are interconnected and disconnected from the main grid.

But embedded networks are a more likely interim measure, where a group of farmers share storage and generation capacity, but maintain a limited connection to the grid.

An embedded network places fewer demands on the grid, meaning a cheaper connection could service its intermittent demand - likely needed only in rare failures or exceptional demand.

Smart metering would play a part, connecting electrical devices through the web to demand management systems to maximise efficiency and reduce usage.

Embedded networks would save on network charges to farmers while networks save on operating expenses and fill their the need to replace the increasing amount of ageing infrastructure in costly to service rural and remote areas. 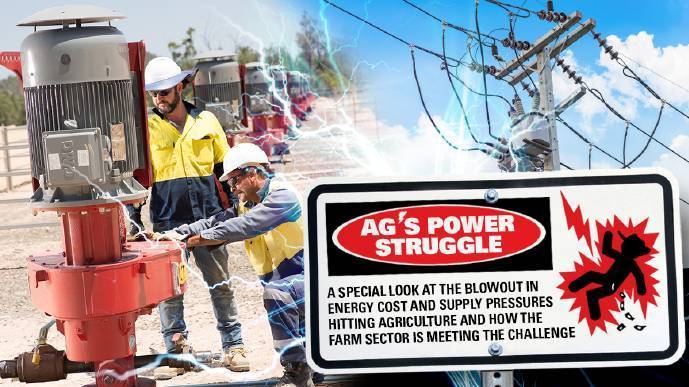 “These embedded assets across the network would create savings that could be shared between networks and users,” Mr Salardini said.

“The incentives for networks in regional Australia are all wrong. Networks essentially increase their profit when they grow their capital asset base. The system should be optimised to get rid of unneeded assets.”

Network costs contribute about 40pc of electricity bills, inflated by network gold plating - over-investment in infrastructure to drive up rate of return from consumers.

Small scale embedded network initiatives are already in place across the country.

In Tasmania, the King Island Renewable Energy Integration Project is developing an embedded grid to harness solar power and batteries to reduce reliance on the diesel powered network.

In Queensland regional provider Ergon, which runs one of the world’s largest electricity networks, is developing remote battery storage capacity to reduce load on remote infrastructure.

NSW Farmers is pitching for funding to trial of an embedded network to supply farms and food processors on the North Coast.

“The way we price grid costs, they are spread right across Essential Energy (regional NSW’s network provider), with high and low cost areas.

“Using embedded networks is a way of identifying opportunities for cost reductions and farmers are key to that.”

The cost of renewables is becoming more competitive. Wind is cheaper than new coal and gas, and it looks like new solar will be too,” Mr Dunstan said.

“Renewables stack up when you need new infrastructure or to augment the network. Infrastructure is long in the tooth in some areas and that is when it can be cost effective to go to mini grids.”

Mr Salardini said the potential for local power supply to reduce costs should not be clouded by ideology.

“We’ve seen a broader debate over climate change and renewables. But in the bush it’s not renewables against coal, it's about network costs and embedded grids can be a solution to the problem,” he said.