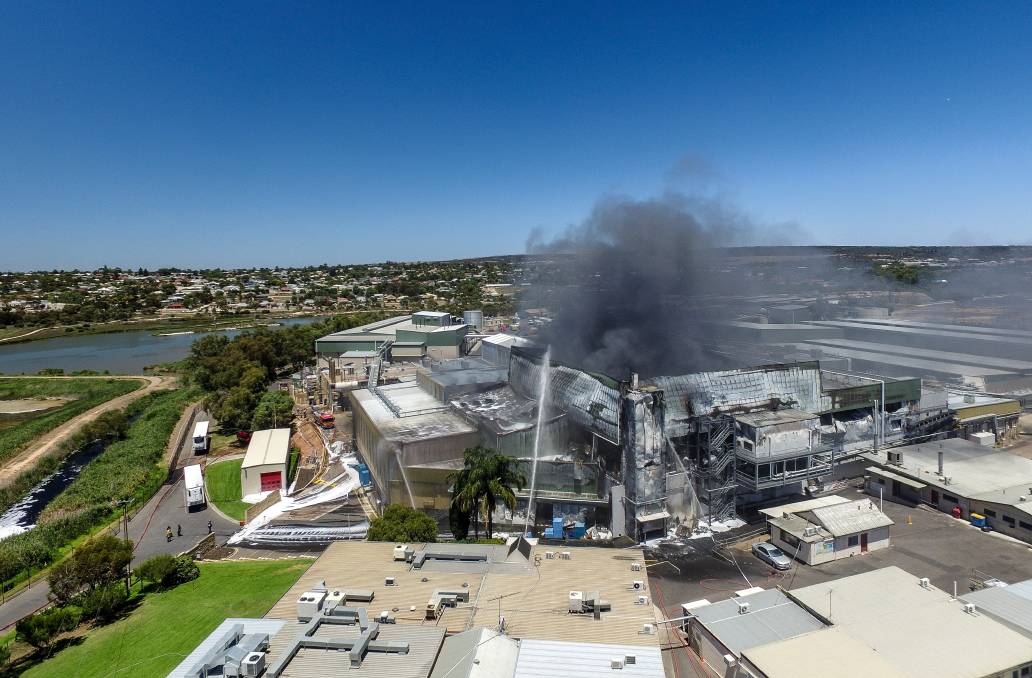 A fire keeps burning at Thomas Foods' meat processing plant at Murray Bridge after an accident in a basement sparked the fire, which has led to closure of the plant and more than 1000 workers facing an unknown future. Thomas has vowed to retain all staff through relocation. It may be able to keep some of the plant still running.

The loss of the Thomas Foods abattoir at Murray Bridge has raised concerns of a national meat shortage if contract orders are not sorted out in the next few days, meat industry experts say.

But the Australian Meat Industry Council says there is no threat to domestic meat supply as the Murray Bridge facility was largely focused on export markets. Woolworths on Thursday also said there was no pressure on beef and lamb supplies to consumers due to the ability of the national network of meat processors to process meat.

It is believed Thomas is negotiating with two Victorian abattoirs to process cattle - O’Connors at Pakenham and the Australian Meat Group at Dandenong to help keep production moving.

It is believed Thomas may still be able to eventually slaughter and chill at its Murray Bridge facility despite the fire, depending on meeting safety and health standards, but needs other facilities to bone carcases.

TFI’s Murray Bridge processed up to 1000 cattle a day as well as two shifts on smaller animals, mostly sheep,  before the fire hit last week. The “freak” fire caused tens of millions of dollars worth of damage and it may be at least a year before Thomas can rebuild - as it has promised it will do. The fire started in a basement and ran into the thick foam linings in the walls, making it almost impossible to extinguish. It was still burning as of midway this week.

​One of Thomas’ major contracts is with Woolworths, and it is believed other rival meat processors are ready fill the void. An insider said Thomas only had a couple a days to sort out the new processing arrangements, otherwise meat shortages could occur. “It has left a very big hole in the meat marketplace,” the insider said. “Often only two weeks back up meat supply is held.” Thomas has indicated it will have no trouble meeting its contracts. It also recently flexed its buying muscle at weaner sales.

A Woolworths spokesperson told The Land: “Our customers will see no impact to our lamb or beef supply in stores nationally as a result of the incident at Thomas Foods as our national meat processing network allows us the flexibility to continue to supply product to our store network.”

Meat and Livestock Australia said it had not noticed any discernible effect on the meat market in Australia from the loss of the Murray Bridge processing plant.

Thomas has promised it will meet all contract orders by diverting work to other Thomas facilities at Lobethal in South Australia and Tamworth in NSW. It may even be possible for TFI to use the meat processing facility lying idle at Cootamundra where it could process up to 600 cattle a day.

“No, no shortage, not at all,” he said. “I know Thomas is working tirelessly to meet contracts but also to make sure its 1400 workers are looked after. That is the priority here, that those workers are cared for.” Teys has offered to take on about 30 of the workers at its Naracoorte facility. The South Australian government has set up a taskforce to help in the recovery process.

Despite it being early days after the fire, Thomas may still be able to slaughter and chill product at Murray Bridge despite losing the newly renovated boning room. Thomas could also distribute product that has been boned elsewhere from Murray Bridge as well.

In a statement late yesterday Thomas said it would be increasing production at Lobethal and Tamworth.

“Thomas Foods International continues to focus on ensuring the best possible outcomes for our staff following the fire at Murray Bridge. As part of our redeployment strategy, we will be increasing production at our Tamworth and Lobethal plants as well as increasing our workforce at both sites.

“Our Wallangarra plant remains closed and is not being considered as part of the company’s current redeployment plans. The long-term and sustainable approach to the recovery and rebuild following the Murray Bridge fire requires an enormous collaborative effort involving many other organisations and authorities that provide much valued support.