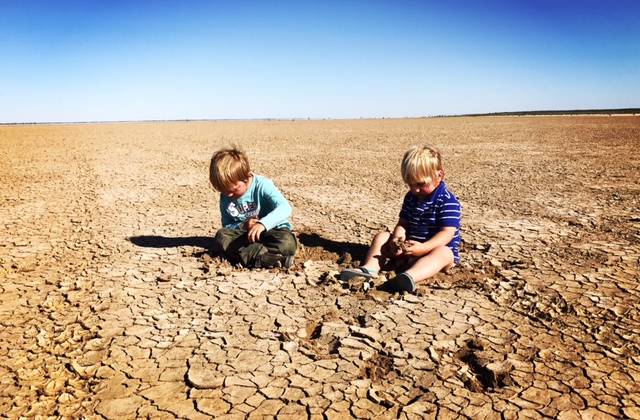 Finn and Archie Siemer on Yantara Lake, Coally Station north of Broken Hill, that went dry Christmas 2015. Many farms across NSW - not just the far west - are struggling with drought. Photo by Tennille Siemer.

It is no small thing to face the fact drought has gripped your land.

For many NSW producers right now it is particularly surreal, considering patchy Summer rain seems to have blessed some regions, but not others, even picking out individual properties for relief during a widespread dry run.

And it’s not just the outback that’s struggling. Several farmers around major regional centres, including Dubbo, Tamworth, and Maitland, are facing tough decisions

In the Hunter Valley things are particularly dire. Dams are drying up and cattle are hungry with lack of rain leaving many farmers struggling as they battle the worst drought in over two decades. Much of the area has yielded single-figure millimeter readings for 2018 so far. This, on top of an extremely dry Winter and Spring last year, is hurting them, and others across the state.

It has been patchy at best in the Central West, according to Shane Kilby, “Nethervy”, Eumungerie. Sporadic, gentle rain has given some producers a bit of hope they can hang on to their cattle.

Some people are preparing for things to get worse if they don’t get rain. Other people are okay now, but they’ll have decisions to make about their livestock in the next few weeks. - Shane Kilby, beef producer, Eumungerie

“Some have fared better than others,” said Mrs Kilby, a beef producer. “There’s been a bit of rain out here that has done a lot of good for the grass. But it is sporadic. Dubbo had about 28mm in January. We’ve had about 50mm at Eumungerie. Some of our neighbors got about 80mm. It’s a matter of whether you got under it or not”

She said a number of people on the northern side of Dubbo had copped the dry weather pretty bad for the better part of a year now.

“It didn’t rain from April to October. One of the biggest problems is runoff.” 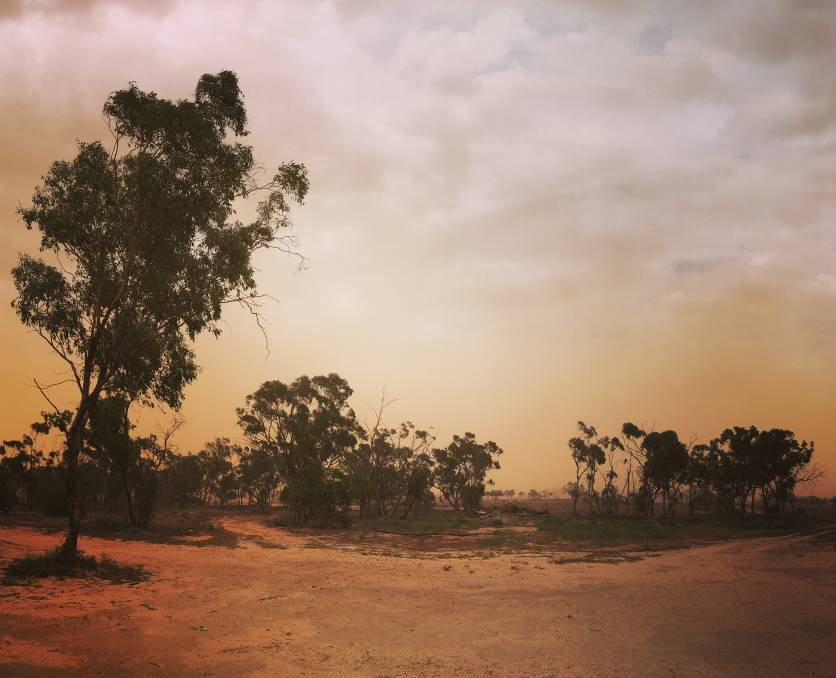 A dust storm at "Burragan", 100km east of Wilcannia last week. For many NSW regions, patchy summer rain seems to have blessed some, but not others. Photo by Bessie Thomas.

She said for many it was ‘watch and wait’ at the moment.

“Some people are preparing for things to get worse if they don’t get rain. Other people are okay now, but they’ll have decisions to make about their livestock in the next few weeks. Everyone is taking a look at their paddocks and deciding whether they sell or not.”

“People are getting concerned mate,” he said. “Further west it’s pretty ordinary too, at Moree and Narrrabri. The time-frame for getting our winter feed in is getting closer. It’s too dry to spray anything to get our country ready for a winter crop.”

It’s usually a safe bet to assume things are a bit dry out in the far west. That’s certainly the case for Bessie and Shannan Thomas right now.

The pair have been hand feeding sheep since May last year on "Burragan", 100km east of Wilcannia.

"It was a tough year," Bessie Thomas said. "This year we've had 2.5mm, which is nothing. We are still waiting for the big break, we are desperately waiting for it to happen this month."

They started feeding cattle late last year and have now sent them away for agistment.

"If it rains we can bring them home. The last 12 to 24 months have been terrible. We never get an average year, we get a great year or bad year.” 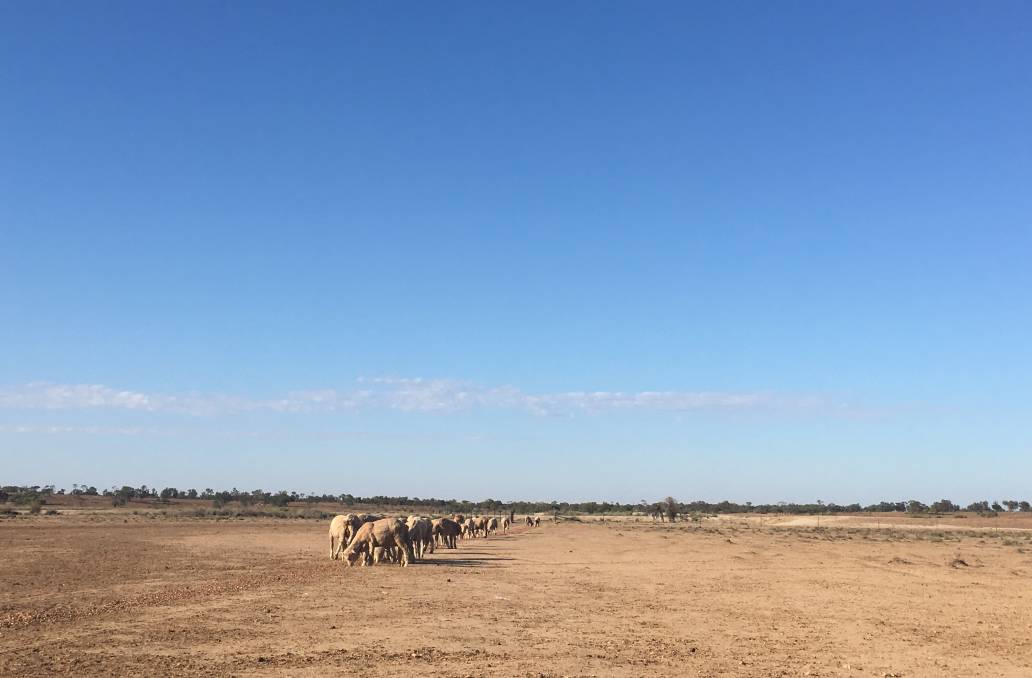 Feeding sheep due to drought conditions on "Burragan" near Wilcannia. The property got about two-thirds of its average rainfall last year, with owners sending cattle away for agistment. Photo by Bessie Thomas.

“I was surprised how flexible and adaptive (the Queensland system) was to providing assistance with fodder, transport, rates, taxes, water, charges and child care,” he said. “If it’s good enough for Queensland, it is surely good enough for NSW.”

“Queensland’s model of drought assistance differs from the other seven states and territories in that it reflects a long-running and continuing set of very challenging conditions,” Mr Blair said.

“The NSW (package) aligns to the intergovernmental agreement signed in 2013 and the drought preparedness and management strategies adopted at that time by all other states and territories.”

Sponsored by
Class 4 noxious weed grips areas of the state.
Test
The Walcha operation sold 170 rams in a bumper on-property sale.
Test
Airlie Merino's 2022 ram sale sells top ram at $8,600 (Tag No.1256). From 72 rams available 60 were sold with an average of $2,448.33
Test
Stock feed wheat bids are now $25/t above the harvest lows with feed barley up more than $30/t.
Test
Nutrient growth is not all about what's added to soil
Test
Rural land values came close to doubling in 12 months in parts of NSW.
Test
Daily showers and thunderstorms will affect a broad area of NSW during the rest of this week, with another rain-bearing system on the horizon for next week.
Test
Better seasonal conditions and limited processor competition has cut saleyard supply so far this year, but that could be about to change next week.
Test