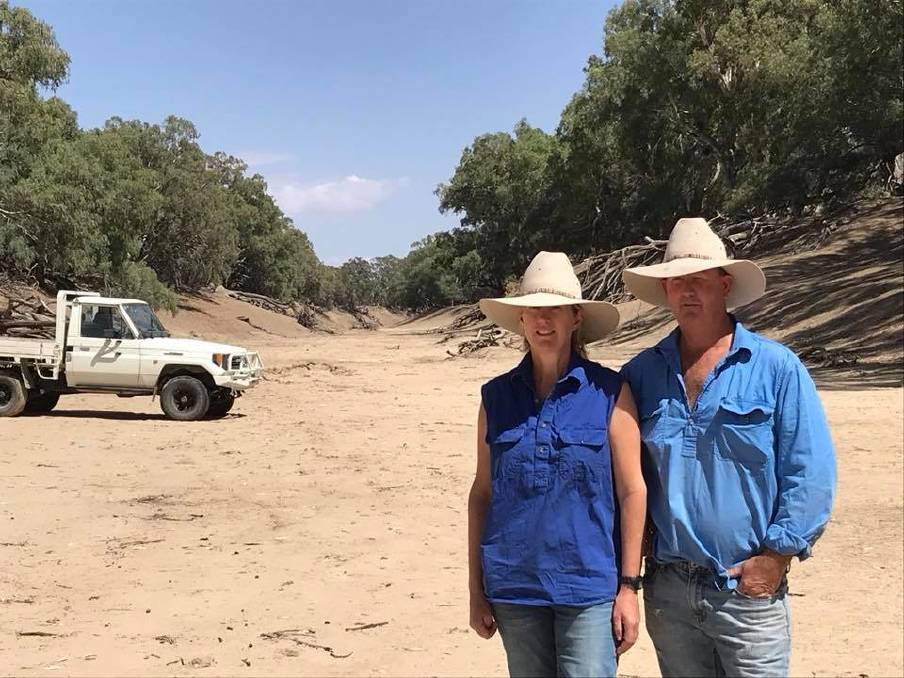 Chrissie and Bill Ashby on Trevallyn Station, Wilcannia, where the Darling River has run dry for almost 10 kilometres. The rest of their 80km Darling river frontage is filled by pockets of 'stinking pools'.

Parts of Darling turn dry spaced out by 'stinking pools'

It’s a stark reminder of not only how dry it’s been out west this year, but how little the argy-bargy over the Murray-Darling river system is doing to put water in the Darling River.

In fact at the McClure and Ashby property Trevallyn Station near Wilcannia, there is no water in the river, not a drop in the river bed for almost 10km.

Chrissie and Bill Ashby stood in the river and tweeted the situation online, and their photo was later used by Greens MLC Jeremy Buckingham to show the plight of the river.

Chrissie’s father, Murray McClure, says there are environmental  flows kept by the NSW Government in Keepit and Split  Rock dams – almost 25 megalitres – which could quickly help the Darling get back to its proper flow, especially with large amounts of water expected to come down from floods in Queensland.

But Mr McClure said the government was refusing to release the water.

He says nothing has changed for the river since the Murray-Darling basin plan was announced in 2007.

“It’s just gotten worse, and worse and worse since the scheme came in,” Mr McClure says.

“The Barwon-Darling system has simply been worse off.”

Mr McClure  said what water was in the river on Trevallyn station were just “stinking pools of blue-green algae”.

He said in the 1940s there were plans to put in 35 weirs between Mungindi and Wentworth on the Darling, but this plan was never carried through, and legislation supporting it was degazetted about 9 years ago.

Sponsored by
Test
Agents said the weaner sale featured some of the best cattle they had ever yarded.
Test
A positive lift in the number of quality cattle offered via saleyards has heightened demand and pushed the Eastern Young Cattle Indicator to 901.75c/kg on Wednesday.
Test
New Sydney Showgirl Jessica Neale, is in a unique position to bridge the gap between the city and country.
Test
The demand for quality weaners continues unabated with a solid sale today at Cooma
Test
Producers' attitudes towards on-farm safety need to change
Test
The decision to throw out the plan for a new dam near Lismore and perhaps extract town water from underground aquifers has angered farmers on the Alstonville Plateau
Test
Top genetics on offer as Limousin National sale heads online.
Test