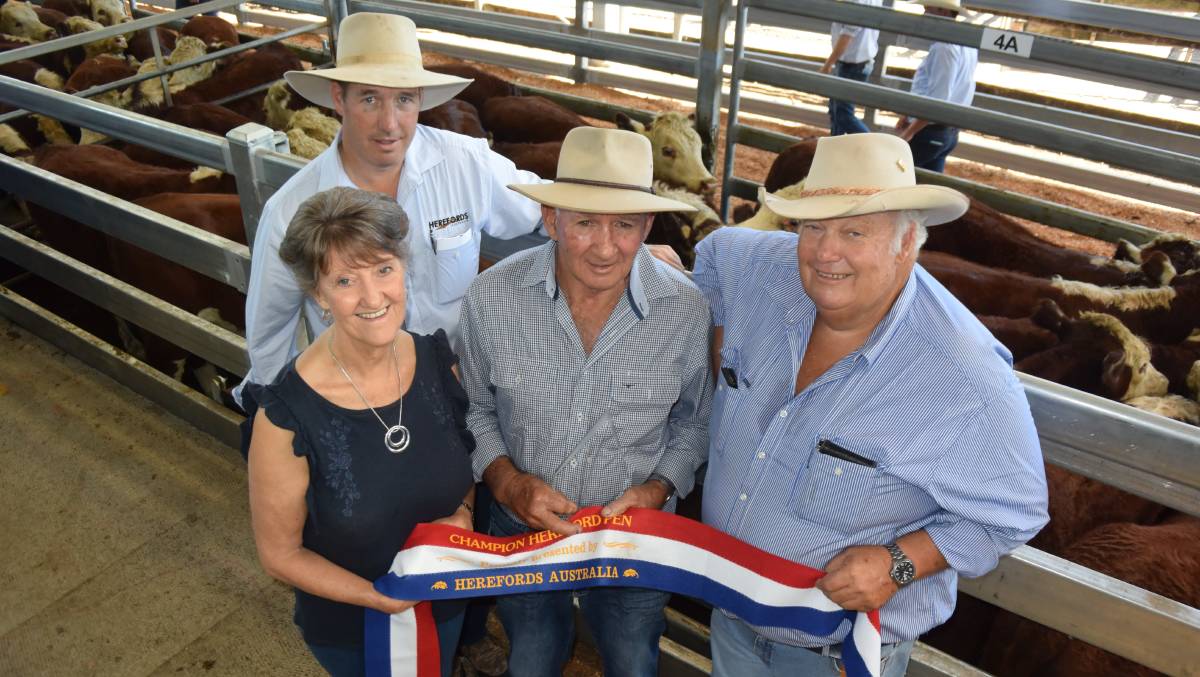 The first of three autumn weaner sales, hosted by George and Fuhrmann Casino, yarded 2423 head on Friday with Hereford the main feature of the day.

Steers, across the board, averaged $948 for 298kg at 318c/kg and heifers averaged $708 for 236kg at 300c/kg with some vendors disappointed at prices when compared to last year. Of course the season had something to do with it, with a poor summer in the Hunter and parts of the central west with no buyers from those areas to lift the bids.

Champion pen of Hereford went to Jim and Jan Smith, “Townview” via Urbenville who topped with their steers at $1293 for 411kg, going to Adrian Spence, Ironbark Herefords Barraba who will put them on oats. Wickham Farms, Killarney, Qld, also bought two of the better pens.

Peterson Partnership, Old Koreelah, sold Hereford steers to $871 at 271kg with all four pens going to repeat buyers including David Cameron, Moree who purchased last year. Their heifers averaged $736 at 224kg, which proved heavier than last season by 25kg.

George and Shirley Hardcastle, “McPherson Herefords”  Koreelah, sold steers 31kg heavier than last year to average $890 at 276kg, which worked out only $70 down on 2017’s feature sale. Their top Hereford steers sold for $1057 at 326kg with Robbie Bloch, CL Squires Inverell, making the bid.

A small pen of Santa Gertrudis/ Hereford, the result of their neighbour Sid Fletcher’s bull jumping the fence, produced steers that topped at $1067 for 340kg.

“Overall we are happy with the sale,” said Mrs Hardcastle. “Prices were down on last year but we picked up a bit with our extra weights.”

“In the past we had buyers from Coonamble and Collarenebri but not this year,” reported Mr McKey. “If we had, perhaps there would have been another 20 to 30c/kg on our weaners which would have been the cream, but that’s ok. We’re happy.”

Robert Page, Heifer Station, bought 40 Hereford heifers, 266kg, from Townview paying 322c/kg or $856, also happy with the price, and will put them first to Angus before Brahman in order to make their valuable first cross breeders.

“There was as good a line of Hereford as I’ve seen at Casino in terms of quality and numbers,” he said. “There was plenty to choose from.”

Top priced heifer was an Angus, out of the Lyle Family’s stud at Yorklea, making 406c/kg or $1089, six cents per kilo more than last year when the family also topped the heifer section at this sale, with the girls going to Pat and Jeanette Vout, Fairy Hill. These repeat buyers are going away from Brahman as they get older and want to introduce young grandchildren to Angus females which are gentle, as coming from the Lyles.

Jim and Jan submitted an unusual pen of five black baldies after an Angus bull from the Mulcahy family’s Grimstead stud pushed through the flood fence. The result were steers to $1062 at 322kg.

Top priced cattle on the day were feeders, not a weaners, and a cross between Hereford and Santa Gertrudis topped that section, making $1603 with judge of the day Noel Cook, “Kindon Station” and Moruyi feedlot at Goondiwindi taking home that pen along with 54 other steers to go straight away onto feed. These heavy steers averaged 297c/kg Brahman/ Angus and Brahman/ Charolais.

“The feedlot game is pretty tight at the moment,” reported Mr Cook. “And prices at Casino are up there compared to Queensland. But the quality of the Hereford overall was exceptional and made the job of judging a tough one. There wasn’t much between them.”

Darryl Amos, old Bonalbo, sold feeders steers from Brahman/ Hereford cows by Shorthorn bulls for 301c/kg at 463kg to bring $1395. Mr Amos also bought weaner Hereford heifers from Reid Partnership, Woodenbong, for 360c/kg at 265kg or $954 which he will put to Brahman bulls in July to drop as three year olds with first cross calves in April.

Mr Amos said straight Hereford retained an important role in North Coast calf production, despite populations diminishing compared to 70 years ago. These days, in the wake of Brahman infusion from the 1980s, the straight Hereford is required to re-invigour first cross production, with suitable females put to Charolais, Angus and Simmental which hit specifications up the chain.