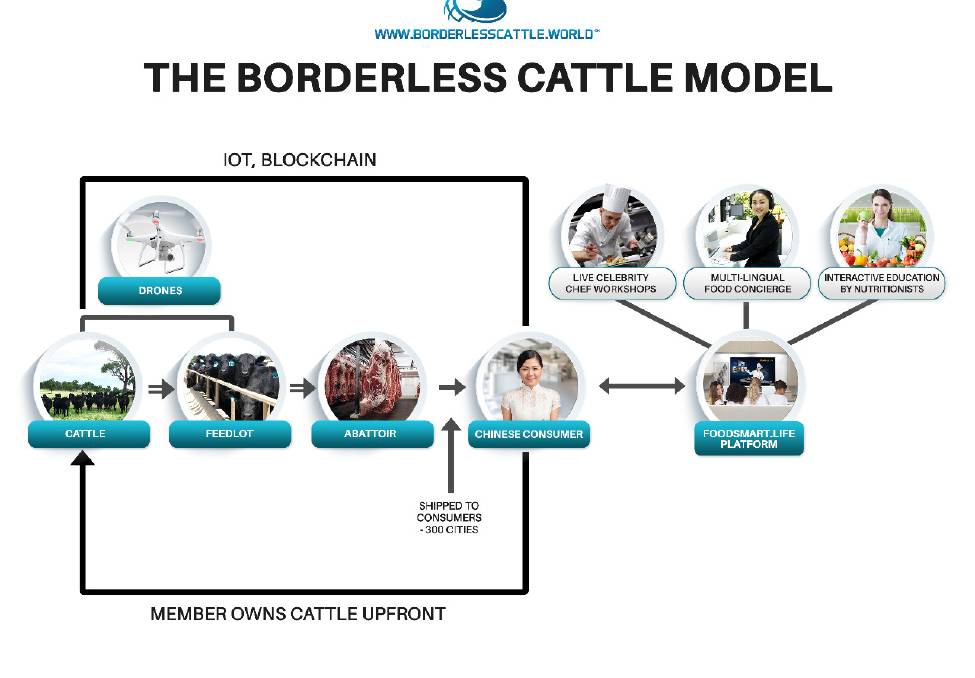 A radical new digital project for Chinese beef consumers to "own" cattle on an Australian farm and watch it grow up in the paddock, was launched in Sydney.

It sounds pie-in-the-sky stuff. A Chinese consumer buys a cow in an Australian paddock and uses technology to trace it all the way to their plate.

But  a group says it has the technology to turn a technical dream into a reality, with Australian farmers to benefit, as a new digital way of “farm to palate” production.

The enticement to farmers is a pre-payment in the process and the foregoing of stock agents’ fees. The risks in many ways are unknown. Who will be in charge of the technology on the farm, and whether  farmers will be compensated properly for the stewardship of the cattle, is not excatly clear.

According to the Chinese-based Borderless Cattle, part of the larger Borderless Healthcare Group,the farmer will be the steward of the cow’s life at it progresses before entering a feedlot. From there it will be processed at an abattoir in Australia, cut up to order and chilled and sent to China. Borderless says it is negotiating with abattoirs to fulfill the special cut orders.

Already the company is investing in drone technology through Central Queensland University as part of the consumer access to the cow’s life. It will also use nanotechnology to monitor the cow’s growth, which can be updated daily to the consumer. The company will create a cartoon-like Tamogotchi of the cow the consumer can view at any time on their device.

The Borderless program will begin in July this year, with deliveries available to more than 300 cities across China, the company says.

“Initially, Borderless Cattle will accept orders from restaurants, which will be required to order a minimum of five cattle. Borderless Cattle anticipates having 500 restaurants or corporate members in its first year. The program will be extended to individual members at a later date,” the company says.

“The company will utilise a suite of technologies including drones, IoT, and blockchain.

“Additionally, through a smart TV platform called Foodsmart.life, members can access recipes, conduct interactive cooking workshops with celebrity chefs from around the world and connect with nutritionists and health advisors, all from the comfort of their own home,” Borderless said.

The company says it is tapping into a new Chinese demand for beef protein, following the relaxation of China’s one child policy. Women were interested in high protein to boost fertility as they planned a second child.

Borderless executive chairman Dr Wei Siang Yu, who was educated at Monash University, said even beef tourism to Australia was a possibility as Chinese couples looked to a “second honeymoon”. He saw an opportunity where Chinese “second honeymooners” would stay in an Australian resort, visit a beef farm, cook up some beef, enjoy, a spa, relax, and contemplate life with a second child.

Dr Wei assured The Land farmers would be properly compensated for looking after the cattle owned by Borderless members. “There will be a pre-payment which will give them the financial comfort. There will be an upfront deposit .” He said technology costs would be covered and Borderless would help with technology issues on farm. He said the technology would showcase the farmers skills through marketing and would add value to the farm. He saw a chance for farmers to learn some Chinese language, so they can converse with consumer beef owners in China. “Producers will be able to create a brand for themselves.”

Geoff Kirkby, “Lowanna” and “Kaysix”, Bellata, is one beef farmer considering being part of Borderless cattle. “I told my father about it and he was unsure at first, but now he is very eager to get involved.

“We  cut out a lot of costs by selling straight to a consumer. It gives us more control over how we sell our beef.” Mr Kirkby, who has Herefords, said he wanted to be sure he was compensated for attending to technical issues while farming, as he also was involved in cropping.

Producers will be able to create a brand for themselves. - Dr Wei Siang Yu, founder of Borderless Healthcare and Borderless Cattle

The company says a member can use the Foodsmart.life platform as a business tool to share or sell portions on to other consumers six to nine months prior to slaughter.

Drone technology is being trialled at CQU, with the idea to make them  able to be automatically recharged, without the need for the farmer to interfere. A consumer could launch the drone from a mobile phone to look at the cattle.

The plan is to place the beef grower at the top of the supply chain with top nutritionists and chefs at the other end, suggesting ways the consumer can cook the beef, as beef is not a traditional food item in China.  Australian beef exports to China were slowly climbing, worth about $600 million a year.

Dr Wei promised an interactive cooking show, with “the best chefs in the world” involved. The Chinese consumers would invite friends around to watch the cooking display on their Smart TV. “It will be like a tupperware party,” he said.

When the end user received the chilled beef order (up to 300 boxes of beef), he expected it would be onsold to friends and families.

“Members become a cattle owner  and a beef merchant,” he said.

“We are taking the food bowl and making it digital. Because in China we have problems with pollution and supermarkets, people  are looking to have their own farm source. They want a food source they can trust. This offers a premium with a very targetted audience.”

There was growth in private restaurants in China, who were interested in their own private cattle source.