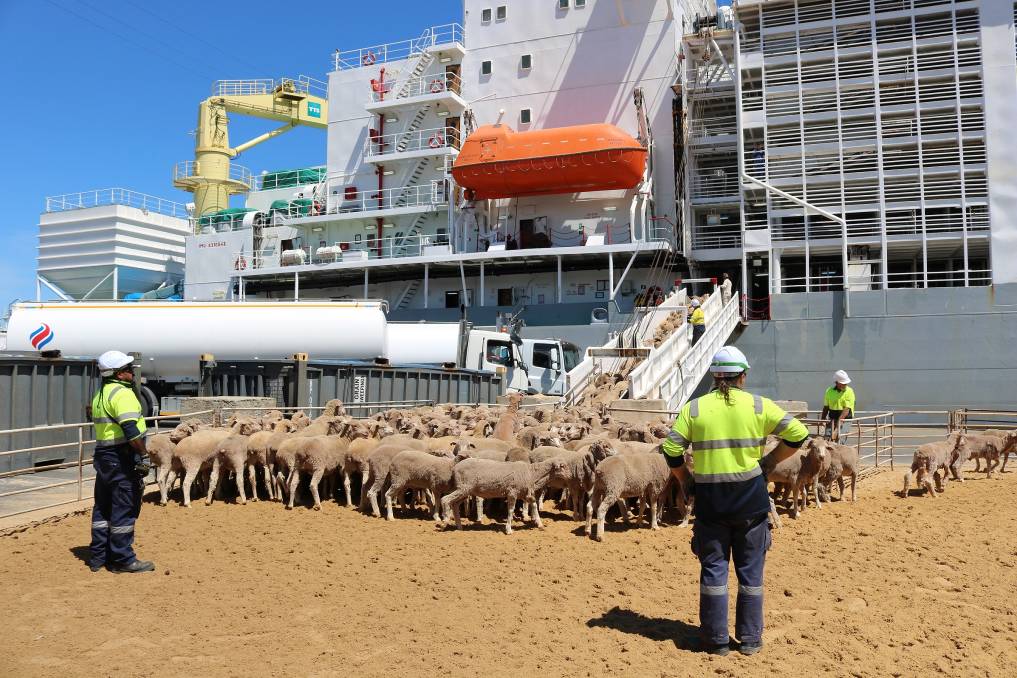 WESTERN Australian farmers have launched a counter-offensive warning about the sharp economic consequences of listening to or acting on the highly emotive and escalating demands of east coast politicians, to ban live sheep exports.

WAFarmers has released economic analysis to debunk a “wildly inaccurate” report used strategically by Animals Australia and compiled by Pegasus Economics suggesting only minor impacts for WA which provides about 85 per cent of the sheep trade.

The state’s biggest farm lobby group says the Animals Australia report was used to cause public confusion about the actual economic impacts of closing the live sheep trade, which has coincided with supplying video footage from last year for the recent 60 Minutes broadcast of issues with heat stress on sheep shipments to the Middle East.

But the analysis by Mecardo, commissioned by WAFarmers and Sheep Producers Australia, shows that the potential price impact for WA producers of banning live sheep exports - based off the slaughter to export price model - would see an additional 1.6 million head being processed in WA which could see prices decline between 18 to 35 per cent.

Mecardo’s brief report has also used broader, historic industry analysis to estimate that the impact on WA producers in dollar per head terms for lamb would be within the $23 to $43 range and for mutton between $18 to $35.

It also said based off the annual slaughter volumes for lamb and sheep within WA during the 2017 season, and taking into account the average annual carcass weight of lamb and mutton in WA, according to the most recent ABS statistics, this price impact would equate to a potential loss of between $80 million to $150 million dollars to the industry.

On Friday after Labor leader Bill Shorten called for an immediate ban on live sheep exports to the Middle East, and NSW rural Liberal Sussan Ley indicated she’d introduce a Private Members Bill to set a date for phasing-out the trade, the WA Pastoralists and Graziers’ Association (PGA) urged cool heads to prevail and for east coast politicians to take a deep breath and consider the economic impacts of their demands.

A brief report looking into the data behind the sheep live export trade in Western Australia - and what it means to producers. Commissioned by @WAFarmershttps://t.co/gHXTGJUApYpic.twitter.com/WsvbG7S4uc

PGA President and WA farmer Tony Seabrook said a ban on the live export of sheep would “decimate employment throughout regional Western Australia”.

“Thousands of regional workers and livestock producers in Western Australia depend on this industry,” he said.

WAFarmers President Tony York and representatives from WAFarmers and the National Farmers’ Federation will meet with Ms Ley MP in Albury tomorrow for urgent talks to discuss her views the live sheep export trade’s future.

In 2017, Australia’s live sheep exports, of close to two million head, reached $249 million with WA the nation’s largest, accounting for more than 85pc of the total volume.

Mr York said the Mecardo report was purely economic so that the true cost of any sudden cessation of the trade could be considered and it was “a fact of life that producers must earn a living”.

He said the Pegasus report used by Animals Australia to try to justify the economics of a trade ban “appeared to confuse national and state-based data”.

“According to them, a ban of the live export trade would translate into a loss of approximately $9 million per annum for Western Australian sheep farmers,” he said.

“This is wildly inaccurate, with the figure actually being somewhere in the vicinity of $80 to $150 million; for some of the larger sheep producers in WA, this figure can be in excess of $100,000 per business.”

In debunking the Animals Australia report, Mr York said the Mecardo report’s data sets resulted from about 30 years of data, and whilst an emphasis on recent trade to show today’s economic affect has been included, “there has been care to acknowledge historical trade”.

He said it was important to provide clarity on the industry’s economic impact; given the reliance of the trade to many WAFarmers’ members and the “highly emotional interest of the general public”.

“WAFarmers recently released a series of recommendations relating to the future of the live export industry, and while we acknowledge the potential increase in costs along the supply chain, we consider it to be the best option moving forward given the alternative would be devastating to the Western Australian agricultural economy.”

Mr York said WAFarmers “absolutely did not condone” the activities and behaviours presented in the footage aired on 60 Minutes and would push as hard as possible to ensure livestock are protected and kept in the best of health for their journeys.

Ahead of talks with Me Ley, WAFarmers CEO Trent Kensett-Smith said the WA perspective needed to be strongly considered in any decisions about the future of the industry.

“WAFarmers seeks to deliver an insight as to the importance of the trade to the Western Australian agricultural economy and to farming businesses across the state, given its dominant representation of 85 per cent of the national live sheep trade,” he said.

“The fact that the national body recognises and respects the importance of this trade, particularly as it relates to Western Australia, speaks to the unity of the agricultural sector when issues arise.”

Despite the recent push to ban sheep exports, the NFF has maintained its position for the live export trade to continue as long as animal welfare standards are improved to the expected standards.

While the Mecardo report points to economic outcomes, industry sources have also urged critics of the live trade to acknowledge advances in animal welfare outcomes through ongoing investments in improvements, including an estimated 12 million non–Australian animals per year benefitting by being processed and handled through associated Australian supply chains and systems.

Acting Prime Minister Michael McCormack said Australia was the only country that exported live animals and had a paddock to plate supply chain assurance system that took care of animal welfare – but stressed exporters were “very much on notice”.

In other key findings, the Mecardo report said the current live sheep export trade volume represented a third of the sheep and lamb offtake in WA each year.

It also said the price interdependence had been shown to exist between WA trade lamb, WA mutton and live export markets that’s comparable to the relationship that exists between WA and East coast markets.

The importance of live sheep exports to WA. https://t.co/pT7BNteBJspic.twitter.com/DXkufRVRWT

“Capacity constraints exist, in terms of available land and shearer availability, when diverting live export volumes into the wool producing sector in WA,” it said.

“Producers already comment on the difficulty in finding shearers to complete the current requirement each season, let alone if this requirement was to grow in order to satisfy the “ban and shear” plan.

“The alternative proposal to a hold and shear strategy would be to slaughter and process the additional 1.6 million sheep per annum domestically.

“However, analysis of the historic relationship between WA slaughter levels and the average weighted WA sale yard price achieved for trade lamb and mutton sales indicates that there would be a financial cost to the WA producer, in the form of lower prices.”

Federal Agriculture Minister David Littleproud said ABARES research had also suggested the banning the live trade, “would actually cost $300 million to the industry and the benefits we’d gain by solely having processing in Australia would only give us $100 million - but we’d lose 10,000 jobs”.

“This is political point scoring by Mr Shorten without any regard for the damage he is doing to the WA economy,” he said.

“No-one disputes the scenes of sheep distressed and dying on carriers were  unacceptable and that there needs to be action to stamp out rogue operators but Mr Shorten’s is a knee-jerk reaction that by all indications isn’t in line with state government policy.”

Mr Blayney said WA farmers had done nothing wrong and pride themselves on the animal welfare controls they have in place on their properties.

But he said federal Labor appeared to have learnt nothing from the impact of their knee-jerk decision to ban live cattle exports to Indonesia, which had a devastating impact on the cattle sector and its long-term viability.

“WA already has record number of unemployed and this move by Mr Shorten is populist politics that will cause significant damage to WA’s agricultural sector, cost jobs, cost businesses and cost export revenue,” he said.

“Premier Mark McGowan needs to start showing some leadership and depth of character and stand up to Mr Shorten and demand a backflip.

“We need to take a considered approach and allow the federal review to run its course, to consult properly with industry, to make valid findings and recommend appropriate action.”