Sorghum prices have reached unprecedented heights and farmers who have seen crops survive a difficult summer are reaping the rewards.

Some farmers are enjoying prices of $335 a tonne on farm, while sorghum delivered to Brisbane port was achieving $385 a tonne this week.

Quality has been high, and the harvest has basically been sold, with the last area of sorghum to be harvested nationally in Central Queensland.

The US-China trade row has delivered a bonus to sorghum producers who have suffered low prices for many years. The market price has been jumping by up to $5 and $10 a week a tonne in the last month.

Joe Hallman, managing director of Agracom Pty Ltd, grain marketing, Quirindi, said quality had held up “surprisingly well” despite the tough conditions. Mr Hallman said he expected the percentage of sorghum 1 to be even higher than last year.

“In general though it’s been a tough summer cropping season,” he said. “The area of sorghum was down. Despite the season, growers have been able to harvest reasonable volumes of sorghum and quality has held up surprisingly well. The prices have been extremely volatile driven by  the offshore factors of China and Donald Trump. This initially put a halt on US sorghum and caused a flurry of demand for Australian sorghum. It led to sorghum prices rising to be on par if not higher than wheat and barley prices. So it’s led to quite a big program of sorghum to be exported in bulk and in containers.” The prices had been put off stock feeders from sorghum grain because it was more expensive than barley or wheat.

Coolah farmers Peter and Charmaine Cook, “Barana”, are celebrating their faith in sorghum with a great harvest that yielded 4.5 tonnes to the hectare. The 167ha of Buster variety sorghum was sown in late November and defoliated on the 10th of April. It had some lucky summer storms come through on it, delivering about six inches of rain (152mm). Peter Cook said he would now use the stubble to graze cattle, that would take them through to the spring. Ironically, some pigs got stuck into the crop, which dropped a lot of seed on the ground, which the cattle will like. He was very happy with the yield. 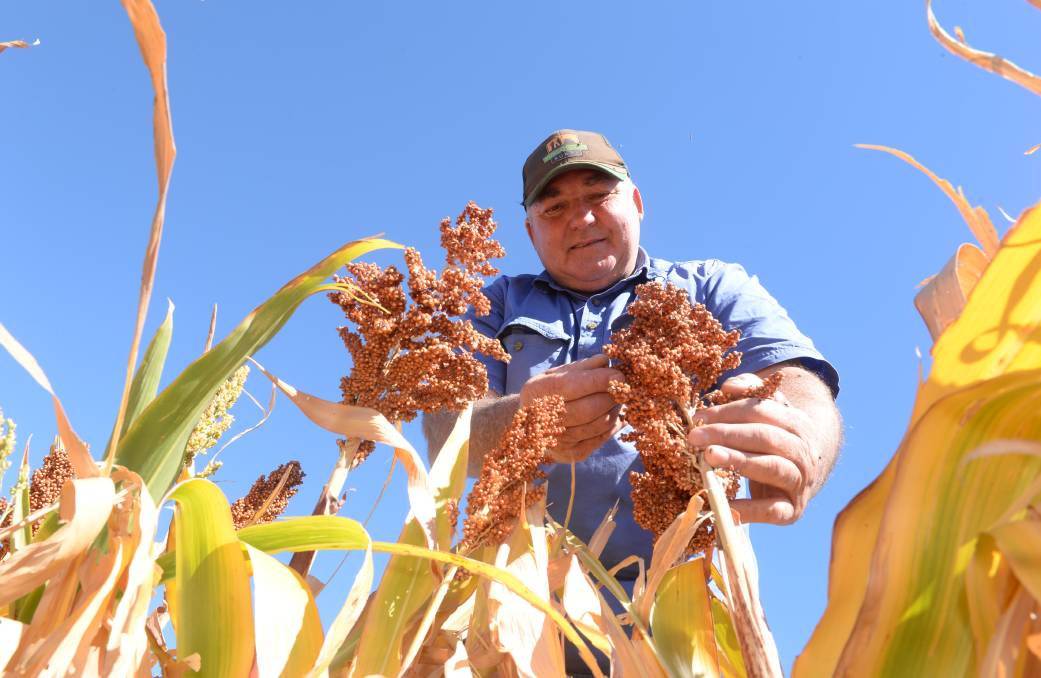 He was being offered $335 a tonne on farm for the sorghum. “I’ve been growing it for 38 years and I’ve never seen anything like it,” he said. “It’s been going up $5 to $10 a week for the last month.” He planted a bit lighter at 49,000 seeds to the hectare, when normally he would do about 60,000 seeds a hectare. But it had not affected yield. He also had double cropped.

He started with pretty low soil moisture but was “lucky enough to get a few summer storms coming through”. He defoliated at a ratio of two litres to the hectare. “The pigs came through and left plenty of seed on the ground so the cattle will like that,” he said. He’ll leave the sorghum paddock in a long fallow for next year’s wheat crop. Some farmers were harvesting sorghum stubble for sale as roughage feed.

LLoyd George, grains analyst from Ag Scientia, said the national sorghum crop would be down on original estimates. Yields were high, although it was expected the Central Queensland crop may have lower yields. There were some good yields on the Darling Downs, and southern Queensland would produce about 600,000 to 700,000 tonnes of sorghum.  Almost 200,000 tonnes of that will end up at a Dalby Bio refinery.

“A significant amount of the crop has already been sold to China,” he said. One sorghum shipment was already leaving Newcastle.

The rise in sorghum prices had occurred after the Chinese announced an anti-dumping inquiry into US sorghum imports. Some US ships with sorghum on the way to China were diverted to other overseas markets, such was the sudden shock over the trade row. On Sunday though the anti-dumping inquiry was dropped by China after the trade row was partly solved. It is not known yet what effect this will have on the Australian price for sorghum next year. US sorghum is about $US100 a tonne cheaper than Australian sorghum.

Mr George said he had never seen such high sorghum prices, and he had been collecting data for 10 years. Sorghum at the moment delivered to Brisbane was attracting $385 a tonne.  In Central Queensland, it was $350 a tonne and at Newcastle it was $370 to $375 a tonne delivered. “I don’t recall we’ve ever seen prices like this.”

Barley too was peaking and at the moment was attracting $400 a tonne delivered to the Darling Downs.

“Clearly the recovery of US trade with China will make a difference and I’d say the Chinese will secure imports from the US almost immediately. An 180 per cent bond on US sorghum imports made the trade unviable.” The Chinese use sorghum in liquor production and for stock feed. The Chinese are keen on all feed grains. The US sends about 4.7 million tonnes of sorghum to China a year.

Mr George said there was an element of domestic demand for sorghum but “there is not going to be a lot of surplus sorghum.”

Despite the continuing dry plaguing farms,  Mr George felt sorghum would be a mainstay this coming summer, especially with unknowns over chickpea prices and instability with the Indian chickpea imports.

“The incentive to plant sorghum will be very strong,” he said.