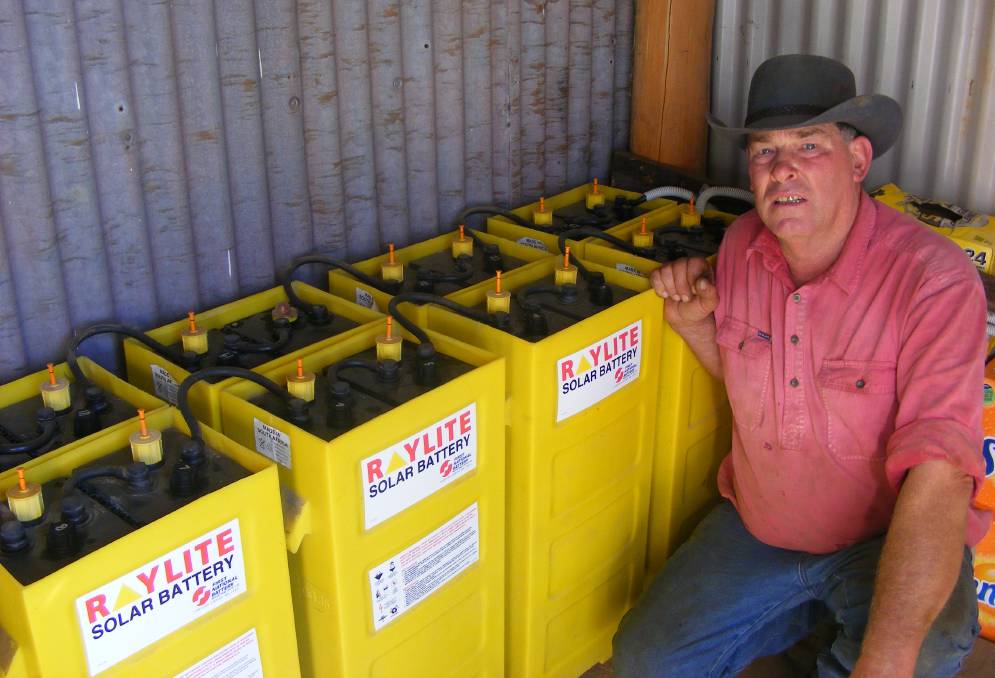 Jeff Foster in front of the battery array that helps power his home. He says total annual maintenance costs are about $50 to $60 to top the batteries up with distilled water.

When Jeff and Marg Foster took on the 160-hectare “Bendee” outside of Bingara in 2011 it was a no-brainer when it came to operating independent of the national energy grid.

WHEN Jeff and Marg Foster took on the 160-hectare “Bendee” outside of Bingara in 2011 it was a no-brainer when it came to operating independent of the national energy grid.

It was going to cost $100,000 to connect to the grid, what with the costs of poles, wires and contractors, compared with $55,000 for a stand-alone solar system.

“We basically had three options, spend the money to connect to the grid, a big diesel generator or solar,” said Mr Foster.

“Our trouble was that it’s expensive to get on the grid, and it’s not like you then get the electricity for free,” he said, “it’s still got to be paid for”.

A few quick calculations and Mr Foster reckoned on today’s retail electricity rates he’d be paying about $7.20 a day or between $2500 and $2700 annually for power.

“And that’s a small use rate, if you’re running pumps to water stock you could quite feasibly double that,” he said. The power unit on “Bendee” runs the household and a significant workshed, which includes a welder, a bench grinder and the usual selection of power tools.

We basically had three options, spend the money to connect to the grid, a big diesel generator or solar. - Jeff Foster

Mrs and Mrs Foster have been running off grid for seven years now and are extremely happy with the system.

Mr Foster has never once been on the roof to maintain the solar panels. They do have to be careful not to overload the system, for instance running the welder and the kettle at the same time, which both draw large amounts of power instantaneously.

He said off-grid was certainly being pushed as the way to go, but added, as was often the case, there was a dark side to the equation.

“For people who can’t afford standalone power, or are limited by their rooftop – say they live in a block of 80 units in Sydney – mains power is going to become more expensive,” said Mr Foster.

“The more people who go to standalone power will mean the costs of maintaining the grid will be borne by fewer people.

“If 20 per cent of customers dropped off the grid tomorrow, costs could double for the remainder.”

He said there would probably come a time when all roofing was photo-voltaic.

Marg laughs when she talks about how little some people know solar. “We still get people asking us: ‘Yes, but what do you do of a night-time?”’