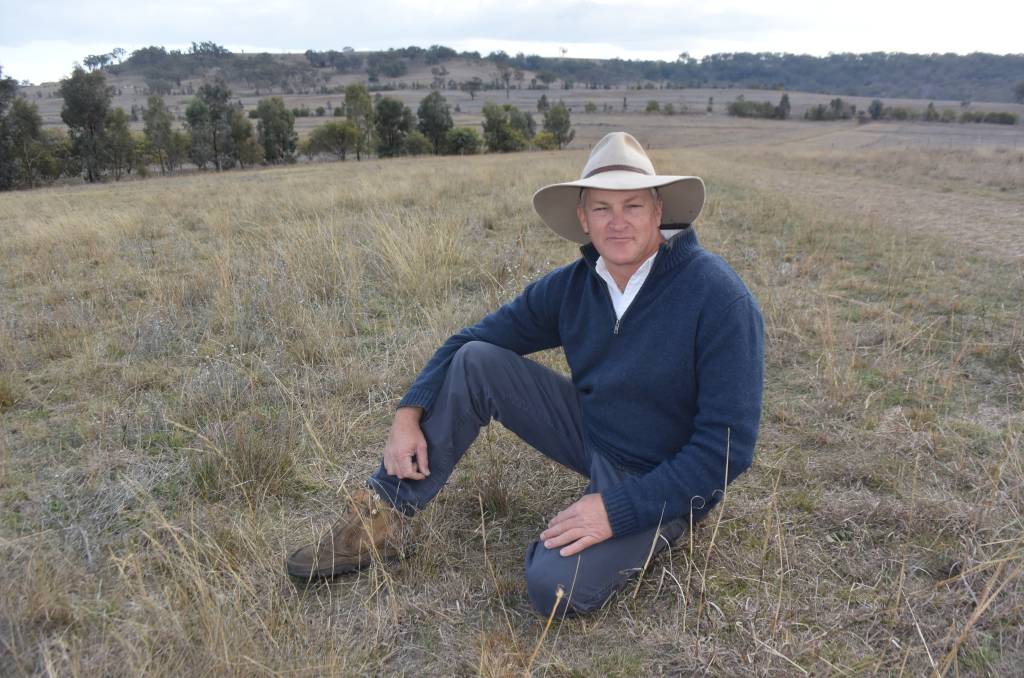 Total ground cover is a reflection of sensible management at Figtee Farms near Inverell, where manager Glenn Morris has been implementing change for the past decade.

There are lessons to be learnt from the current drought but unless we act on them the future will not be kind, advocates an organic producer from Inverell.

A lack of government leadership when it comes to water and vegetation management is restricting farmers’ abilities to survive drought, and for their pastures to recover when rains return, says an organic producer from Inverell.

His farm system is modified to fit organic standards which means external inputs are reduced. So is production in a season like this but not as much as one would imagine.

“Billabong” concentrates on grass finishing and this year Mr Morris reduced his intake of weaners by 30 per cent in order to maintain ground cover.

“I could see it was going to be savage,” he says.

At the core of his enterprise is a holistic approach to soil, water and vegetation with an eye on the future as climate change becomes an accepted phenomenon.

He became a pioneer in the concept that carbon dioxide could be sequestered in soil and that such action could reduce, or at least stabilise, global warming.

Central to his approach is the on-farm production of humus, a remarkable gel-like substance, half carbon, that holds four times its weight in water.

At a soil depth of 30cm, for instance, just one percent humus will store 160,000 litres or 16mm worth of rain. In simple terms, the encouragement of humus production will help a paddock bounce back after drought.

Pastures allowed to decline to the point where soil biology is impacted will take so much longer to return to full production. Dollars already lost in the dry won’t return to the coffers until much further down the track.

In fact, elevated soil temperatures above 24 degrees result in  soil biology burning carbon and loss of that carbon back into the atmosphere.

“It is critical that we get the water cycle working again,” says Mr Morris.

“The reality is that there is more to pasture promotion than super and urea,” Mr Morris says.

“Hydroponic-grown pasture and crops using NPK seem to work well if you are getting rain. But this method does nothing to assist water cycling.

“Urea burns humus. Superphosphates stop the production of biology and mineralisation. Synthetic fertilisers are not helping,” he says. “ We’ve got to adopt ‘a do no harm to biology’ approach.

“The simple NPK method of farming has been encouraged by governments and universities for far too long.”

Mr Morris, grew up on the land at Goulburn before the great fires of 1964 wiped out the idea of succession. After a childhood in Sydney, extensive stock experience and university he landed a job managing a degraded farm at Grafton where he began to mend the broken water and mineral cycle through cell grazing.

“I had an intuitive understanding of the environment at that time and could see how rain would follow dry times and that it would simply run-off. Four to six weeks later we would be back in dry. The soil simply would not hold water.

Mr Morris began using techniques that mimicked the great grazing episodes of historic herds which entered high growth pastures and trampled the excess into the soil with their hooves, supplying soil-borne microbes with food which, in turn, returned nutrients back to the plants.

The consumer can make a difference in this arena, Mr Morris says. “They can support farmers doing the right thing.”

While change is coming, with more producers adopting a biological approach the pace is frustratingly slow for Mr Morris.

“This drought is impacting on carbon in the soil,” he says. “It is literally getting burnt out. And what are we doing at the political and university level between droughts to promote better management?

“We’ve got to change the conversation. We’ve got to start linking our actions with what is going on with climate change and improve the water cycle and agricultural abundance. This year for the first time in a while world grain supplies will not match demand because of droughts and heat waves.”

Mr Morris advocates a farm with half in perennial grassland, a quarter under forest - for water cycling - and the remainder under crop.

“It is critical that we don’t have country as bare ground,” he says. “However there is no leadership on this issue.

“At the federal level there is a climate information vacuum of truth and at the state level there is no action. Governments have stripped dollars out of rural Australia through cutbacks in catchment management programs and landcare.

“We are destroying the water cycle through widespread land clearing, particularly in Queensland. We need to start revegetation big time. Trees keep the landscape cool and mild which encourages local rainfall.

When Mr Morris purchased Billabong in 2006 he was caught by surprise by a lack of water, which didn’t fall from the sky until May 2007 and then quickly washed away. His pastures were degraded with poor ground cover, about 10 to 15 percent.

A lot of growing seasons since that time have been pitifully short, only fed only by remnant cyclonic weather from the north

Mr Morris has modified existing contour banks which slowed erosion but tended to only concentrate water flow in gullies.

Construction of swell and swale, as advocated by William Albrecht, running parallel to the ridge line has stopped erosion, and with native trees planted on those swales, and double fenced to keep livestock out, the mounds of earth remain soft and absorbent. Rain now soaks into those mounds and disperses into the surrounding soil, rather than going down the creek.

Soil re-mineralisation is also helped by giving cattle dry lick in which nutrients like calcium are returned after they have done good in the rumen.

Holistic management through cell grazing has replicated natural grazing pressure, where the hooves of animals punch stubble from a body of feed back into the ground while feeding. And he cites work carried out by Allan Savory in this regard.

The message about food is increasingly cloudy these days, he says. Livestock is an important tool for carbon sequestration. Animal fats are good for us if they contain Omega 3, as they do in a pasture finished product where livestock have access to a diversity of plant species.

“I find it sad that the people who care most about the planet, vegans, are condemning livestock –  one of our greatest tools we’ve got to combat climate change,” he says.

“Currently 40 per cent of the world landscape is under pasture and in order for that area to stay healthy it needs to be managed. If we take animals out of the equation that 40 per cent will turn to desert through over cropping.

“You are wasting nothing when organic matter gets put back in the soil,” says Mr Morris. “The foundation to health and success is underground.”